10 per cent reservation for EWS 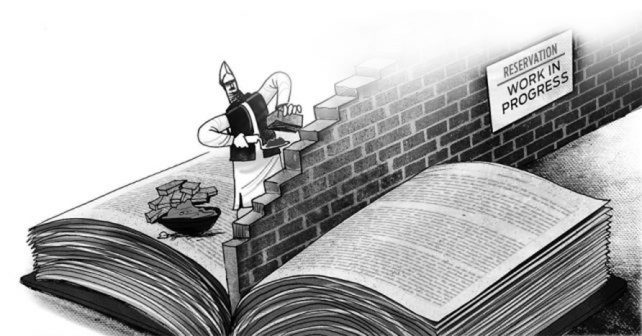 Extraordinary Execution – Appeasement of ‘Upper most’ in the Upper Castes!

The previous BJP led government at the Centre introduced the provision of 10 percent reservation for the economically weaker sections (EWS) in job and education through the constitutional amendment.  The reservation policy is meant for the sections of people who are deprived socially and educationally due to their birth, discriminated and denied certain basic human rights and due representation in the governance. And the policy is not applicable, to the categories of people who are only economically deprived, for the reason that such deprivation is not permanent but ever changing. But the provisions of reservation based on economic criterion were deliberately introduced under the titles ‘economically backward’, ‘creamy layer’, ‘economically weaker section’ etc.

The latest provision of reservation of 10 percent is meant for the people- economically weaker (annual family income of not exceeding Rs. 8 lakhs) who are not covered under the existing reservation policy.  In fact, it is meant for upper castes that are not subject to social deprivation like SCs, STs and OBCs. The fundamentals associated with 10 per cent reservation for EWS is against the social justice concept as adumbrated in the Constitution.

So far many provisions for reservation both from the legislative and the executive sides have been formulated and implemented.  But in respect of 10 percent reservation for EWS, starting from the Cabinet approval, introduction of the Bill in both the Houses of the Parliament, passing of the Bill and getting the assent of the passed Bill from the President of India-all these phases got completed within a period of one week.  Notification from the Ministry was also issued immediately based on which reservation for the upper castes will become effective at once.  In respect of the admission in educational institutions it was directed by the Ministry to provide all sorts of infrastructure so that no set back in enrolling admission for the 10 percent EWS category. May we expect such sort of speedy execution of the policy decisions in respect of the other activities of the government meant for the welfare of the people?