As the world struggles with the current global health crisis, the Government of India has declared COVID – 19 to be a ‘notified disaster’. After the onslaught of Corona lockdown that is enduring in its third phase, the Governments are badly in need of financial resources to carry out the countrywide relief measures. The budgetary statements of the Governments are already loaded with significant deficits that would require newer channels to get additional revenue to meet the normal State governance. With the Corona lockdown the economic activities of the country have come to a standstill.

Whenever a countrywide distress or disaster occurs, it is habitual for the Union Government and the State Governments to mobilize financial resources through public contributions, donations etc. Many a times such contributions from the public are eligible for the concessions under the Income Tax Act. Due to IT concessions many industrialists, entrepreneurs and philanthropists would donate liberally to the Relief Funds operated by the Governments. The Union Government is already operating many Disaster Relief Funds, the resources of which would be filled with donations. The same is the case with the State Government. As per Section 135 of the Companies Act 2013, every corporate* is expected to spend 2 per cent of their net profit in corporate social responsibility (CSR) activities annually. It is an imperative for the corporates. The allocated share of every corporate can either be spent directly by it or ensure that contribution goes to the agencies, authorized to spend in turn to the specified activities.

At present an exclusive corpus viz. Prime Minister’s Citizen Assistance and Relief in Emergency Situations (PM CARES) Fund has been instituted to mobilize financial resources from the public to meet the current and prospective COVID – 19 relief measures. Usually such corpus creation cannot be originated as executive order and it requires some legislative concurrence besides the formation of committee consisting of representatives from the opposition political parties. It seems such formalities have not been complied while constituting PM CARES Fund. Challenging the constitution of PM CARES Fund being violative of various provisions of the Constitution of India, petition was filed at the apex court of the country but rejected. Apart from PM CARES Fund, many Disaster Relief Funds have already been under the control of the Union Government. 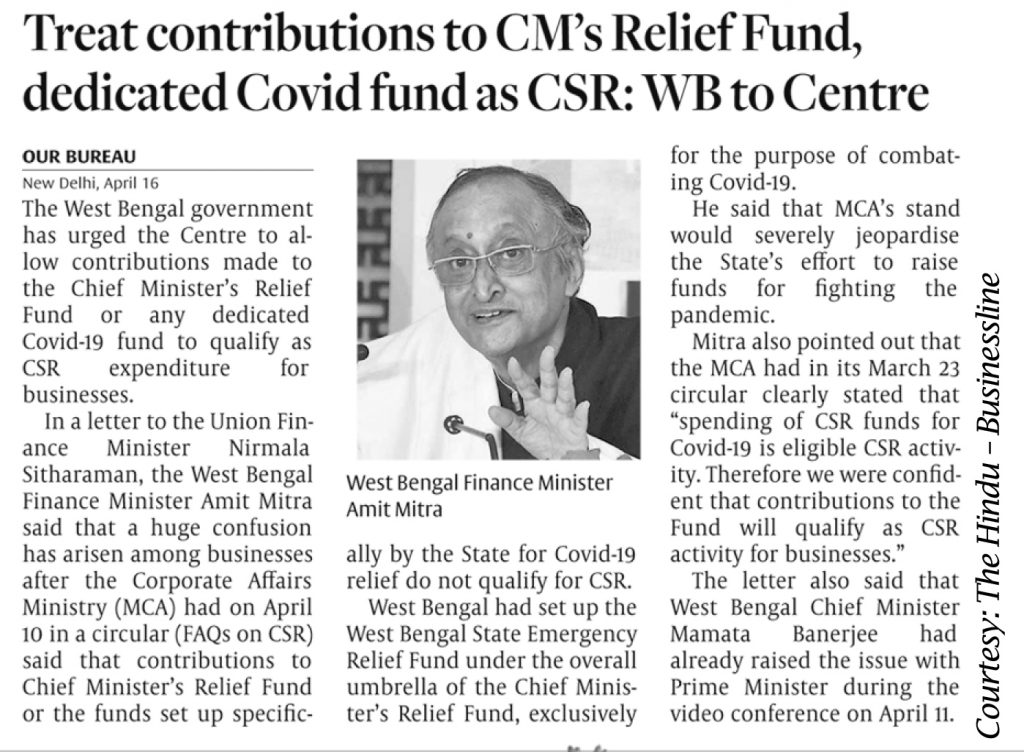 Fiscal Federalism was weakened through the introduction of GST even much earlier to Corona lockdown. Yet another weakening dimension has continued in the contribution of CSR funds by the corporates to State Governments. The Constitutional provision of Article 1 in letter says, ‘India, that is Bharat shall be a Union of States’ is not reflected in spirit even during the current Corona pandemic relief endeavours through the unfairness that prevails in mobilizing the revenue of CSR from the corporates between the Centre and the States.