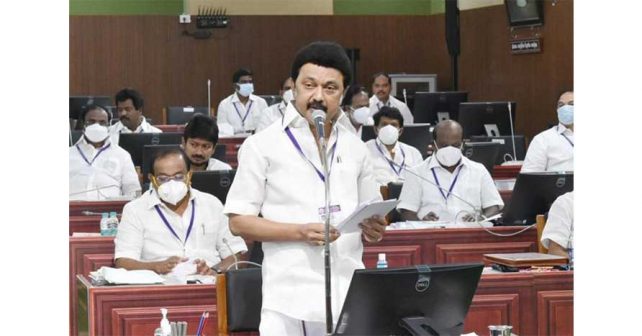 Thanthai Periyar has always been eulogised as the “Sun of Rationalism”. As a mark of respect to the glow of his genius, M.K. Stalin, the chief minister of Tamil Nadu, announced in the Legislative Assembly on September 06, 2021 that Periyar’s birth Day on September 17, 2021 would be observed as the ‘Social Justice Day’. It was indeed a promulgation of historical significance and great honour to the founder of Dravidar Kazhagam. The chief minister announced in the State Legislative Assembly that every year, September 17 would be celebrated as “Social Justice Day” in honour of the unparalleled social reformer ‘Periyar’ E.V. Ramasamy.

The announcement of the chief minister reads in brief as follows:

“When the Dravida Munnetra Kazhagam (DMK) formed Government for the first time in 1967, Arignar Anna declared that his rule was being dedicated to Thanthai Periyar. I am extremely delighted to make this announcement with the kind permission of the leader of the House. I deem it a great opportunity and a very rare one too in my life. The DMK Government has formed its rule for the sixth time in our State. At this juncture I am glad to make this announcement in the Legislative Assembly.

Service to form a Society of Dignity and Knowledge

To quote Thanthai Periyar – “I, E.V. Ramasamy, have dedicated myself to the noble cause of reforming the Dravidian community and transform it on par with the other world communities, as one rich in dignity and knowledge. I am restlessly involved in this service. I can’t say I am competent enough to fulfil this task. Since no one else has come forward to accomplish it, I have volunteered to achieve it.”

Declaring thus Thanthai Periyar strove till the age of 95 for this community and for the nation, in spite of his declined health. With the policy “Man’s beauty lies in dignity and knowledge” as its basis, Thanthai Periyar started the Self Respect Movement. To transform people as per this principle, he travelled all over the country as a master of worldly wisdom. His agitations were all inimitable. His writings were such that none could dare equal him. His speeches were dreadful to many. He considered the welfare of the Tamils as his own welfare. He opposed everything which was detrimental to the Tamil citizens of India. To narrate and describe his long walks, tedious tours, his campaigns and conferences, his historic agitations and his protests is a massive task. They are so vast that this august Assembly would need to be kept in abeyance atleast for ten days.

These two were his vital policies. Abolition of castes and women’s liberation were his only two targets. He raised his voice against everything which hindered these two missions. His queries were all scientific in temper. He persuaded everyone to think like him and act.

His thoughts related to Self Respect helped the Tamils attain it. The weapon of rationalism sharpened by him led to the clarity of their thought. The doors were opened for the upliftment of suppressed people who were trodden down by the evil dominance of caste system. When the doors of social justice were opened for them, they were able to achieve educational opportunities and employment. The doors shut for centuries were knocked open by Thanthai Periyar’s unwavering resolve. His scientific spirit in questioning laid the foundation for social justice all over India, besides its glory in Tamil Nadu.

The Indian Constitution was amended for the first time by the efforts of Periyar who had never ever stepped into the Parliament. Nor did he ever wish to enter it. But many of his thoughts were enacted as laws by the State Legislative Assembly. He had the rare skill of getting his thoughts translated into action by others.

Arignar Anna (C.N. Annadurai) who moulded and shaped us all, once said –

“The days I served with Periyar when I was young, were the days of spring in my life.”

Anna and Kalaignar were both nurtured by Periyar’s wisdom. It paved the way for the growth of the Dravida Munnetra Kazhagam (DMK). Revolutionary political thoughts were sown as seeds which have sprouted today as our rule in Tamil Nadu. You are now witnessing us fulfilling the dreams of Periyar by following in his footprints. No other reformation movement in the world could be as proud as we are of our achievements.

Most of the reformers would have talked much and vanished. The rulers in power would never ever have even thought of any reformation. It is only in the State of Tamil Nadu that a movement of reformation grew as a political movement and translated reformatory thoughts into action. This movement of ours implemented reformations and also enacted them as laws. Ultimately our movement has made the society reach glorious heights.

The seed was sown by Thanthai Periyar

The State of Tamil Nadu stands witness today for all those who achieved education and employment, posts and positions, upliftment from deplorable condition, empowerment of women etc can be attributed to the efforts of Periyar.

If the State has grown today as a large tree, the credit goes to the seeds sown by Periyar, the manure sprinkled by Arignar Anna and the care taken by Kalaignar for its rapid growth. It is our duty to protect and preserve this large tree.

Self-Respect, rationalism, equality, social justice and rights to annihilate social degradations were Periyar’s principles which laid the foundation for the progress of our society. The path for our future would also be laid by the same thoughts of Periyar. As a mark of our respect for Periyar thoughts, we have decided to celebrate, the birthday of Periyar – September 17 – as the ‘Social Justice Day’. The Government of Tamil Nadu feels proud of this announcement.

Pledge to be taken by Government Departments

All the offices and departments under the governance of the State should take a pledge on September 17 that all the employees would adhere to the policies and principles of humanity. Everyone in the Government secretariat should also take this pledge.

This must be done consistently on the ‘Social Justice Day’ every year.

All the places are native;
All are our kith and kin.

I take pledge to follow these lovable culture codes.

*               I shall ensure my actions are based on the sprit of self respect with sharp rationalistic outlook.

*               I take a pledge to continue my journey of life on this day to establish a society founded on the principle of social justice.

When Thanthai Periyar passed away, Kalaignar, who was then the chief minister, said –

“Thanthai Periyar has ended his tours. We shall continue his journey.”

As per his resolution, let us all march ahead and continue the journey.”

(The above text – excerpts are the translated version of the speech published in Tamil daily, ‘Murasoli’ dated 7th September 2021)