A Guide to Exploring Atheism 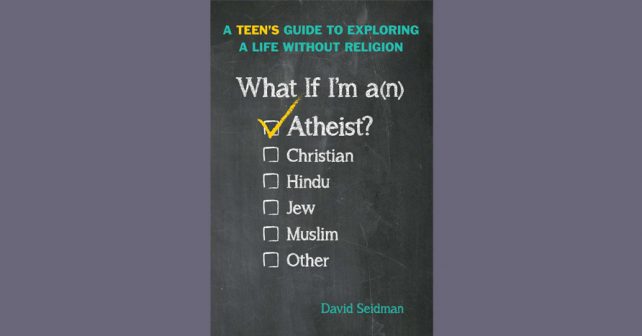 Being different in this world isn’t always easy, especially for young people who are trying to figure themselves out while finding their place in a community. This process can be even more difficult for those whose beliefs differ from the majority of people in their lives. David Seidman’s book, What if I’m a(n) Atheist?, offers a step-by-step guide to understanding changing beliefs as well as how to handle identifying as an atheist publicly.

The book is divided into four sections and the readers may pass through during a “coming out” journey. The first section is a great introduction for anyone interested in learning more about atheism in general. It provides definitions of terms common not only to atheism but religions as a whole, as well as facts and statistics that let readers know they wouldn’t be alone in adopting the atheist point of view. The best part of this section is that Seidman puts atheism in terms that have direct correlation to the religion with which many readers are already familiar. For example, the “Ten Atheist Commandments” provides questioning Christians with a known framework as they contemplate walking into the unknown world of nonreligion. Seidman also highlights where theists and atheists differ: “While many believers focus on God’s desires, unbehaviours tend to care most about their fellow humans.”

The next section discusses life as an atheist, including the differences between being raised in an atheist family and deconverting to atheism as a young adult. This is probably the most influential section of the book, as it gives a step-by-step guide to “coming out” to friends and family as well as dealing with the myriad reactions one might encounter. One chapter specifically discusses how to handle religion in school and what can be done to discourage any inclusion of religion in public schools. The final chapter in this section provides tips on what to do when holidays come around, specifically how to celebrate without losing the atheist stance but staying respectful of others. The chapter even includes a list of anti-God songs for occasions when there’s too much religion in the celebrations at hand. There is also a list of holidays that require religious belief.

Section three provides common arguments those who are exploring leaving religion might face as well as rebuttals they can use when encountering such arguments. These include arguments against the decision to deconvert, against atheism, for religion, and for atheism. Seidman’s advice can be applied to any area someone might need to defend: “As long as you believe what you say and can defend it with facts and logic, you should be able to stand up to anyone who challenges you.”

The final section offers some “what next” advice, including returning to a religion, colleges affiliated religiously or not, and career paths and jobs that are/aren’t atheist friendly. The book also includes a glossary of the terms and definitions used in the book along with an appendix containing websites, books, helpline/community support, news outlets, blogs, radio, television, in-person groups, online groups, and college scholarships for the atheist community.

Seidman provides a well-rounded book that supports and encourages teenagers to embrace who they are and what they believe. Along with his advice, he includes quotes from real teens who experienced deconversion from religion. This adds a personal tone to the discussion: readers can relate to their peers rather than feel preached at by adults.

The way Seidman organized the book is a good template for supporting the process teenagers might face when they need to publicly share something about themselves that’s against the norm or their family’s beliefs.