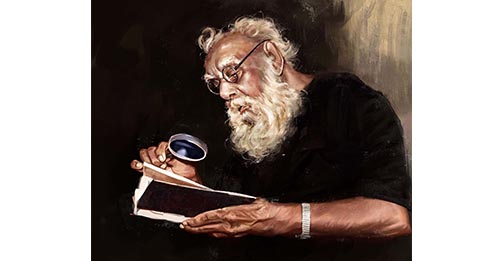 Bhagat Singh and his associates Rajguru and Sukhdev were hanged by the British 90 years ago, on March 23, 1931 for the killing of British officer J.P. Saunders. Periyar’s editorial in ‘Kudi Arasu’ in its issue on 29th March 1931, under the caption – ‘Bhagat Singh’, revolved around his martyrdom, its background, controversies and repercussions. The content of that editorial is in nutshell, as follows.

Bhagat Singh who was sentenced to death by the British, breathed his last recently. He was hanged on 23rd March. Two of his associates were also hanged on the same day. His death was mourned by all and the British government was condemned by all. We find today the so called patriots and warriors chiding Gandhi for this tragedy. It seems to me a display of insincere grief because the same group of mourners are found at our back acclaiming Lord Irwin who represents the British government. The obvious hypocrisy is undeniably irksome.

The other side of mourners
It is learnt now that the hanging of Bhagat Singh was not prevented by Gandhi, though he could have and should have. His pact with Irwin is shrouded in mystery but the mourning group was found rejoicing as if it is a great victory. The death of a martyr was being celebrated without any inhibition in several parts of the country. Gandhi flattered Lord Irwin by calling him ‘Mahatma’ and commanded people to call him so. Irwin went a step further and eulogised Gandhi as a paragon of virtues, imbued with divinity. This sort of sycophancy was nauseating indeed. All the Englishmen in the British Government were watching the unabashed exchange of laurels, to our surprise. This was the scenario immediately after the hanging of Bhagat Singh.
Within four or five days there is a chameleon-like change of colour in our mourning groups. I find them raising slogans against Gandhi and the Congress, accompanied by waving of black flags wherever he goes. There is an uproar of contempt in almost every public meeting where he addresses.

The Man and the  Phenomenon

It is very easy and very famous to condemn persons or acts without seeking to understand the springs of action, the causes that underlie them. Bhagat Singh was not previously well known, he did not become popular because of an act of violence, an act of terrorism. Terrorists have flourished in India, off and on, for nearly thirty years, and at no time, except in the early days of Bengal, did any of them attain a fraction of that popularity which came to Bhagat Singh. That is a patent fact which cannot be denied; it has to be admitted.”
Courtesy: ‘Jawahar Lal Nehru’s Autobiography’

Quite baffling
The true opinions of people in the political arena baffle us. It is difficult to decipher what exactly their principle is. I sometimes wonder whether they actually have any principle in the first place. People are behind the veil of inconsistency. Infact, we did predict during Gandhi’s Dandi March in March, 1930, that it was in no way beneficial to the country and its people. It was a useless protest against the salt-law imposed by the British in 1857. We reiteratively argued that it would affect the progress of the people who are already in deep distress. We also stressed that the Dandi March could defer freedom from the British. But our premonition fell on deaf ears. People ignored us when we alerted them.
Our neighboring countries too felt that Gandhi had betrayed the poor people of India. True egalitarians in those countries expressed concern that his activities could worsen the condition here instead of mitigating the sufferings of our people. The well wishers of our country raised voice of protest against Gandhi but our own people who glorify themselves as patriots followed him, courting arrest and enduring imprisonment. They came out of prison cells wearing invisible crowns of victory and were lauded by simpletons. What is baffling is, the same crowd condemning Gandhi and Congress, after the martyrdom of Bhagat Singh. It is not clear to us what benefit we would derive by such changes in the mob-mentality.

Big Life Vs Long Life
Most people in our country are insensitive individuals, care-free, irresponsible, utterly selfish and reckless morons. They crave for false prestige, without any useful outcome. It is really better that Bhagat Singh vanished from this rotten society. Had he lived longer, he would have been forced inevitably to keep watching the irritating activities of our sluggish mob. He would have spent every moment enduring the impediments caused by our people, who would have been an unbearable pain in his neck. Peaceful death was better for him than a shameful life with such people. We believe he did meet with a truly tranquil end. Infact, we are now longing for such a glorious end for ourselves.
What is to be seen in life is whether a man accomplished his duties and tasks or not during his life time. The outcome, results, benefits and consequences are all of secondary importance. To do the right thing rightly at the right time is all that matters in life. In our opinion, Bhagat Singh had unswerving resolve in his ideals. Time and tide were apt for his action. He had always been fulfilling his tasks at the right place and time. Perhaps there were some lapses or defects in his mode of fulfillment which led to the mix-up and made his plans misfire. But we would never dare find fault with his policies, principles and ideals.

Staunch and Stubborn
If Bhagat Singh had lived and died contrary to his policies and if he had deviated from his path and plans, we would have disregarded him and ignored his end. We acclaim him today as a noble warrior because he was devoid of hypocrisy. He remained staunch and stubborn in his ideals till his last breath and hence has earned our admiration. He craved for a socialist way of life, equality and solidarity. We would stress that India needs all that Bhagat Singh desired for. Excerpts from his letter to the Governor of Punjab would substantiate his noble ideals:
“The Communist party must capture the governance by the mandate of people and discriminations among them should vanish. Until this happens, our war will not cease. Killing us would not end our fight. Many more would begin at where we leave and the fight and strife would go on – both visibly and invisibly.” Thus wrote Bhagat Singh to the person who was the Governor of Punjab at that point of time.

“What is to be seen in life is whether a man accomplished his duties and tasks or not during his life time. The outcome, results, benefits and consequences are all of secondary importance. To do the right thing rightly at the right time is all that matters in life. In our opinion, Bhagat Singh had unswerving resolve in his ideals. Time and tide were apt for his action.”

Atheism – not a Crime
Bhagat Singh believed in himself – not in any God or Goddess. Hence nothing was an act of god for him. Atheism is not a crime by any law. Even if it is prohibited by a law sometime in the world to come, it should hold no fear for us. Nobody would be harmed by our atheist way of life. People have nothing to lose by our disbelief. Besides we have resolved not to cause discomfort of any sort to people by our being atheists.
We can’t help it if our atheist way of life causes unintentional hurt. We must avoid hurting any individual, any community or even people of any other country on earth, through our policy of atheism. Let us be prepared to endure suffering but abstain from intentionally inflicting physical or mental torture on others. Our atheism should not lead to mutual recriminations in society. As long as we do not harm others, we can lead our life freely as staunch atheists, without any fear of intimidation. Let us adhere to our personal principle of atheism with an inexplicable sense of self-sacrifice. I have highlighted all these because Bhagat Singh was an atheist throughout his life.

Class-Struggle
We know very well that untouchability cannot be eradicated unless barriers such as upper caste and lower caste are demolished. Similarly poverty in society cannot be eradicated as long as two classes exist – one as the capitalist, ruling class and the other as the working, labour class. True dawn of socialism would break only when the dusk of class-struggle falls. An absolute egalitarian society would be formed when this happens. This was the belief of Bhagat Singh too.
Ironical Conduct
One who believes that all these noble policies are quite just and essential would raise slogans against Gandhi and Congress. It would not be a matter of surprise for us. Nor would we consider it a crime. But when they acclaim Gandhi and Congress, we are really astonished by the irony, and shocked terribly by their hypocritical conduct.
When Gandhi declared in public that he is guided by God and that Varnasrama is greater than everything in the world, we found him soaked in brahminist thoughts. When he proclaimed that every activity on earth is the act of god, we got it confirmed that Gandhian thoughts are in no way different from brahminist thoughts. The real portrait of Gandhi was instantly revealed. Since, the belief and thoughts of the Congress are similar to those of Gandhi, we arrived at a conclusion that our country would be doomed if the Congress is not annihilated.

Enviable End
People have started realising now how inconsistent Gandhi was in his principles and beliefs. Today they dare brush aside Gandhian thoughts as a bundle of contradictions. In a sense it is a victory for our thoughts. We might not have achieved it had Bhagat Singh not been sentenced to death. People would have still been adoring Gandhi, perhaps to a greater extent. If Bhagat Singh had taken ill and died, he would have just been a handful of ash. But his death has paved another path for people to reach ultimate equality and attain peace. We are at a loss of the right words to acclaim his enviable death. We wholeheartedly admire his meaningful life and death. He was too young for the name and fame he earned. Not all can ever earn them before the stage of autumn in their life.

Let it continue
Before concluding my write-up I urge upon the government to carry on with their killing-spree. Let it short list atleast four noble men like Bhagat Singh from every district and hang them, so that our people wake-up from slumber as early as possible. Brave hearts like Bhagat Singh do not perish. They sprout up and pervade our memory.