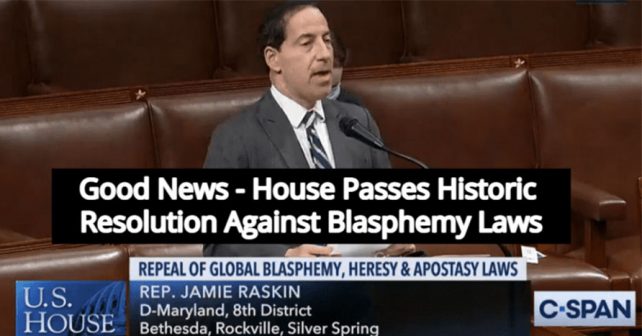 Article 18 of the International Declaration of Human Rights states that “everyone has the right to freedom of thought, conscience and religion; this right includes freedom to change his religion or belief, and freedom, either alone or in community with others and in public or private, to manifest his religion or belief in teaching, practice, worship and observance”;

Many countries continue to have criminal blasphemy laws and punish people who engage in expression deemed by the government to be blasphemous, heretical, apostate, defamatory of religion, or insulting to religion or to religious symbols, figures, or feelings. Such punishment can include fines, imprisonment, and capital punishment including beheading;

Blasphemy laws that have affected Christians, Muslims, Jews, Hindus, Baha’i, secularists, and many other groups, are inconsistent with international human rights standards because they establish and promote official religious orthodoxy and dogma over individual liberty, and often result in violations of the freedoms of religion, thought, and expression that are protected under international instruments, including Articles 18 and 19 of the International Covenant on Civil and Political Rights (ICCPR);

The United Nations Human Rights Committee stated in General Comment 34 that “prohibitions of displays of lack of respect” or a religion or other belief system, including blasphemy laws, are incompatible with the [ICCPR].”;

The United States Commission on International Religious Freedom (USCIRF) has found that blasphemy charges are often based on false accusations, used for sectarian or political purposes. They foster religious intolerance, discrimination, and violence;

USCIRF has found’ that at least 70 countries had blasphemy laws as of 2018;

The PEW Research Center found that countries with laws against blasphemy, apostasy, or defamation of religion were more likely to have severe governmental restrictions on religion, and to experience social hostilities based on religion, than countries that did not have such laws;

An international group of experts convened by the Office of the United Nations High Commissioner for Human Rights recommended in 2012 that “States that have blasphemy laws should repeal them as such laws have a stifling impact on the enjoyment of freedom of religion or belief and healthy dialogue and debate about religion.”

Blasphemy laws are inconsistent with United Nations resolutions adopted by consensus since 2011 recognizing that religious intolerance is best fought through positive measures, such as education, outreach, and counter-speech, and that criminalization of speech is warranted only for the prevention of imminent violence; Restrictive religious freedom laws validate and promote social violence targeted at religious minorities and dissenters, whether Christian, Muslim, secularist, or other;

Blasphemy laws in the United States were invalidated by the adoption of the First Amendment to the Constitution, which protects the freedoms of thought, conscience, expression, and religious exercise; and the United States has become a beacon of religious freedom and tolerance around the world:

The House of Representatives resolved

(1) recognizes that blasphemy, heresy, and apostasy laws inappropriately position governments as arbiters of religious truth and empower officials to impose religious dogma on individuals or minorities through the power of the government or through violence sanctioned by the government;

(2) calls on the President and the Secretary of State to make the repeal of blasphemy, heresy, and apostasy laws a priority in the bilateral relationships of the United States with all countries that have such laws, through direct interventions in bilateral and multilateral fora;

(3) encourages the President and the Secretary of State to oppose—

(B) any attempts to expand the international norm on incitement to include blasphemy or defamation of religions;

(4) supports efforts by the United Nations to combat intolerance, discrimination, or violence against persons based on religion or belief without restricting expression, including United Nations Human Rights Council Resolution 16/18 (2011) and the Istanbul Process meetings pursuant to such resolution, that are consistent with the First Amendment to the Constitution;

(5) calls on the President and the Secretary of State to designate countries that enforce blasphemy, heresy, or apostasy laws as “countries of particular concern for religious freedom” under section 402(b)(1)(A)(ii) of the International Religious Freedom Act of 1998 (22 U.S.C. 6442(b)(1)(A)(ii)) for engaging in or tolerating severe violations of religious freedom, as a result of the abuses flowing from the enforcement of such laws and from unpunished vigilante violence often generated by blasphemy allegations;

(6) urges the governments of countries that enforce blasphemy, heresy, or apostasy laws to amend or repeal such laws, as they provide pretext and impunity for vigilante violence against religious’ minorities; and

(7) urges the governments of countries that have prosecuted, imprisoned, and persecuted people on charges of blasphemy, heresy, or apostasy to release such people unconditionally and, once released, to ensure their safety and that of their families.

The role of American Humanist Association was imminent in mobilising people opinion in favour of the resolution that invalidates the blasphemy laws that was passed in      December 2020. The resolution was moved by U.S. Congress Representative from Maryland Mr. Jamie Ruskin.

The US has led by passing resolution against the blasphemy laws which has shown light and humanist path for other countries to follow.