Asiriyar Dr. K.Veeramani addressing at the massive conference. The leaders of all the political parties and social organisations are on the dais.

The border area of Hosur in between States of Tamil Nadu and Karnataka captured the attention of the public recently due to the premeditated murder of Nantheesh-Swathi an young couple wedded inter caste. The decayed bodies of the couple were recovered from a water pond within a weeks’ period. The murder was allegedly committed from the side of Swathi’s family which belongs to an upper caste. Nantheesh, hailed from a scheduled caste. The incidences of such ‘Murders of Arrogance’ are occurring which the oppressive communities carry on with pride. The religious fundamentalists who uphold the prevalence of caste system project such ‘Murders of Arrogance’ as a set back to the progressive forces including Periyar Movement on the abolition of caste system.

No doubt, the Murders of Arrogance have to be condemned vehemently as told by Asiriyar K.Veeramani, President, Dravidar Kazhagam, who refuted the allegation of Hindutva forces. Though it is true that the caste system with graded inequalities cannot be annihilated in the short span of  a century, our efforts must be speeded up in view of ‘Murders of Arrogance’, which have taken place one after another, and which, among other things, take away the rights of youth to decide their own life. Hence, even if such Murders of Arrogance are a few, they cannot be ignored.  More propaganda against such murders has to be carried out extending support to aggrieved families.

Dravidar Kazhagam organized the ‘Conference of Abolition of Caste and Untouchability’ at Hosur, Krishnagiri district, Tamil Nadu on 30th December 2018 with the participation of all the political parties identifying themselves with the cause. The parents (Narayanappa – Thimmakka) of Nantheesh were invited from the village, Soodu Kondapallu, nearer to Hosur.  Asiriyar K.Veeramani consoled the sorrowful parents for the great loss of their son as the victim of caste atrocities.

Excerpts from the speech of Dr. K. Veeramani 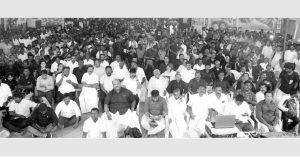 The mammoth audience, assembled in solidarity

A separate wing has to be formed by the Tamil Nadu State Government to prevent ‘Murders of Arrogance’ as in the line of exclusive police wings to prevent smuggling of temple idols and prohibition enforcement.

The organized fight is against the inhuman philosophy viz. varnasrama that perpetuated caste system and not against any individual or section which have been privileged by it.

The agenda of making the Manusmriti in lieu of Indian Constitution as resolved by the Saffron outfits has to opposed by all means. The progress made on annihilation of caste system has to be taken further with hectic propaganda to change the mindset of the people. Our Mission is to abolish both untouchability and caste system, resulting in the elimination of ‘Murders of Arrogance’.

The overwhelming participation in the conference both from functionaries and cadres of all the political parties and social organizations and sizeable section from the public proved the success of the conference which would arrest the caste atrocities particularly around the area.