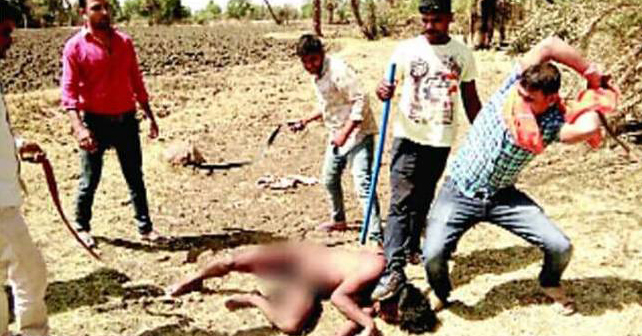 The model state ruled by BJP, the political mask wearer of RSS witnessed a huge emancipation with solidarity of Dalit masses against the inhuman atrocities committed on the brethren in a place at the vicinity of police station at Una, Gujarat. Before this turbulent situation subsides, again atrocities have been inflicted on the Dalit members by the socially oppressive upper caste land lords to remove the carcass of dead cow, for which they refused to do. The communally dominant land lord has forced the Dalit family which includes a pregnant woman. This inhuman event has occurred in Banaskantha district of Gujarat state.

When societal conditions deteriorate like this in Gujarat, in another BJP ruled state of Haryana initiatives are on the move to establish ‘cow university’ by the Gau Seva Ayog of Government of Haryana. The Chairman of Haryana Gau Seva Ayog, Bhami Ram Mangla has told that the proposed university is in need of 500 acres of land. It has been proposed to conduct research on urine and dung of cow. It is notable that the sponsoring body Gau Seva Ayog had ordered police to pick up samples of biriyani from vendors in Muslim – dominated Mewat just ahead of Eid to check whether beef had been used. Opposition from locals and secular activists and opposition parties forced the Chief Minister of the State to order an end to the food raids.

In this Connection the Chairman of Ayog has visited Kamadhenu University, established in 2009 by the then Narendra Modi headed BJP State Government for research in veterinary and animal sciences, including dairies and fisheries.

When the constitutional provision under the directive principle of state policy as per Article 48 emphasises the state to take steps for preserving and improving the breeds and prohibiting slaughter of cows and calves and other milch animals  and draught cattle, why are the specific efforts   being taken to protect cow alone? It is nothing new to the blatant and favoured approach to Hindu religious belief of cow worship. Is it not against the Constitutional guarantee for the secular functioning of the State?

On the one side, in the name of cow raksha, the Dalit people are attacked and on the other, to glorify the respect of the cows in Hindu religion, cow- university is proposed by the State Government. Both the States are ruled by BJP. The approach adopted by both the state Governments is to discriminate the people and assign the lower strata of the people with cow related duties is nothing but revival of varnashra dharma, taking back the country back to some 3000 years!