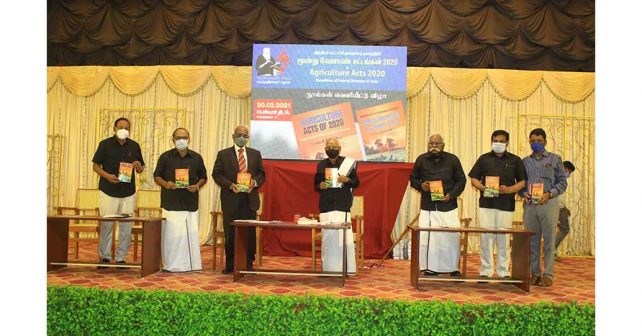 Dravidar Kazhagam (Party) has published two books (Tamil and English version), ‘Agriculture Acts 2020 – Demolition of Federal Structure of India’, written by Dr. Justice A.K. Rajan, a former judge of Madras High Court, Tamil Nadu. The book release function was organized by The Rationalists’ Forum at Periyar Thidal, Chennai on 20th February 2021. The day coincided with the 87th day of continuous farmers’ protest at Delhi’s borders with the demand to repeal the three farm laws, enacted at the Parliament by the Centre rule headed by BJP.

Narrating the special features of the book, and the legal aspects especially, the violations on the provisions of the Indian Constitution with reference to the three farm laws, V. Kumaresan, Treasurer of Dravidar Kazhagam (DK) welcomed the dignitaries and the audience. The audience were both with physical presence and through visual means.

Highlighting the escalating contributions of farm sector to the country’s economy even during the COVID-19 pandemic period, when the rest of the sectors showed either slow down or negative trend, V. Anburaj, General Secretary, DK covered in the introducing speech. He pointed out the lack of due compensation for the contributions made by the farming communities.

Book Release: The books, both in Tamil and English were released by Asiriyar Dr. K. Veeramani, President, Dravidar Kazhagam. Dr. Justice A.K. Rajan, author of the books was felicitated by him.

Com. Dr. Vijoo Krishnan, Joint Secretary, All India Kisan Sabha, joined the meet through zoom from the farmers’ agitation site at Delhi’s border addressed. In his speech, he pointed out that so far the Centre had not directly enacted legislation on agriculture since the subject comes under the State List of the VII Schedule of the Indian Constitution. The Central government has no governing power at all on it. So far the Centre has directed the State governments by sending the model draft of legislation subject to modifications in it according to the requirements of the respective States. Now the Centre has legislated ‘uniform laws’ for the entire country that will not practically promote for the interest and welfare of farmers.

Since the enacted farm laws facilitate free marketing of farm produces, the hold and control of traders, big corporate will be more on the farmers. The minimum support price (MSP) announced for agriculture crop produces by the Central government will become meaningless in course of time. That condition would further ditch the farmers who suffer under the peril of unremunerative price for their produces. So the agitating farmers demand for legal protection to sustain the MSPs. 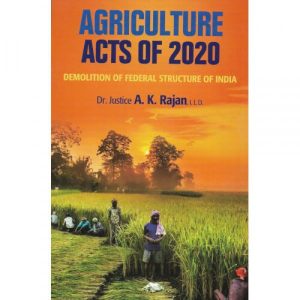 Dr. Justice A.K. Rajan: Indian Constitution demarcates the roles of various wings of State viz. judiciary, legislature and executive and defines them as separation of governing powers. Every citizen of the country has got right to approach the judiciary to redress the grievances in case of any dispute. That right cannot be denied to anyone. One of the three farm laws viz. contract farming act encourages the farmers to enter into contract with the sponsor, who would be mostly big traders and corporates. In case of any disputes in the performance of the contractual obligations on the part the sponsor, the concerned farmer cannot approach the court for remedy. A special mechanism with the composition of only executives are available as per the Act to settle the dispute. The denial of exploring for judicial remedy is contrary to the basic structure of the Constitution. Such enactments create bad precedence.

Asiriyar Dr. K. Veeramani : The present saffron rulers at the Centre, value the legal code of their Hindutva viz. Manusmriti very high. The prescription of Manusmiriti is adhered with utmost respect by the rulers. Verse 84 of the Chapter X of Manusmiriti says,

“People think agriculture to be good; but that occupation is despised by the righteous; the iron tipped wood injures the earth and the earthly creatures”.

When the contents of Manusmriti considers agriculture and naturally agriculturists at low ebb, how could it be expected from the present rulers at the Centre to enact for the encouragement and progress of agriculture.

Besides, agriculture is in the governing domain of States. Already many rights of the States have been usurped by the Central rulers. The present enactments will further curtail the governing power of States besides arresting the revenues received by them in agricultural marketing. The enactments by the Centre will demolish the federal structure of the country, pointed as ‘Union of States’ in the Constitution.

S.Arivukkarasu, Presidium Chairman, DK inaugurated the function, while addressing he pointed about the author of the books, for his rich and wide experience in the judiciary as the judge of High Court as well as in the executive side as Law Secretary of the State government. Besides, the author hails from agricultural family and background. In that way the discussed points in the book are authoritative and bonafide to its core meaning and interpretation.

R.Tamil Selvan, State Secretary, The Rationalists’ Forum proposed vote of thanks. Many from the audience purchased the released books from Dr. K. Veeramani who presided over the function.