‘All India Quota’ is Unconstitutional 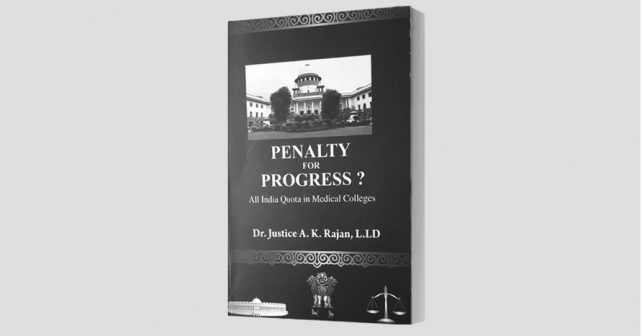 ‘PENALTY for PROGRESS? All India Quota in Medical Colleges’, is the next to ‘Reservation and some other important issues and the Constitution’ and ‘Spare a Moment’ written by Dr. Justice A.K. Rajan. The author, having rendered service in the Bar was recruited directly as district judge and elevated as high court judge with intermittent service as Law Secretary in the State Government of Tamil Nadu. Besides, he headed various committees formed by the State government. The one committee observed that the present archakas many of whom perform poojas in hereditary succession in the temples managed by Hindu Religious and Charitable Endowments Department of the State are ignorant of requisite agamas, meant for the temples and the respective deities. The unquenchable teaching and analytical faculty in the author has facilitated the publication of the recent contribution ‘PENALTY for PROGRESS? All India Quota in Medical Colleges’.

At present, the awareness about the denial of reservation for Other Backward Classes (OBCs) in the All India Quota in Medical College has been created more in public domain through debates and discussions. The book is the first on the issue analysing critically and contributing in an implied manner on what has to be done. The publication is the timely need of the hour.

The contents of the book assume significance when all the mainstream political parties both in the ruling and on the opposition sides including the State government of Tamil Nadu and Dravidar Kazhagam, the pioneering movement of social justice had approached the higher judiciary, insisting the implementation of reservation for OBCs as per the policy, enunciated in the Tamil Nadu Act of 1993 duly placed in IX Schedule of Indian Constitution.

The Medical and Dental Councils of India have to respect their Regulations that stipulate the reservation in the medical and dental seats in All India Quota (contributed seats by the States) has to be provided as per the practice of the respective State governments. The prayer to the Madras High Court was to issue the writ of mandamus and to ensure the implementation of reservation as per the Regulations of the empowered Medical and Dental Councils of India.

Dr. Justice A.K. Rajan traces the contribution of medical and dental seats by the States (later coined in practice as ‘All India Quota’ – AIQ) as per the pronouncement of the apex court in Dr. Pradeep Jain Vs. Union of India case is equivalent to the levy of penalty for the progress made by the States under federal political polity. If any State does not have sufficient infrastructure of providing medical and dental education, it needs to be provided by the Centre only through financial support and other services.

The author narrates the intricacies of the constitutional provision under Article 142 which says any decrees passed by the Supreme Court ‘shall be enforceable throughout the territory of India in such a manner as may be prescribed by or under any law made by parliament’. But so far the parliament has not enacted any legislation for ‘All India Quota’ as per the decrees passed by the apex court as early as in 1984. With the eclipse for Central legislation, the Medical Council of India has formulated its Regulation that ensures reservation as per the respective State policy. But the Tamil Nadu State Act of 1993 is not mere State legislated Act but has been formalised by the Parliament through the 76th Constitution Amendment.

The Central Ministry and the Medical and Dental Councils of India have defended their so far denial of OBC reservation stating that the Supreme Court has not given any direction. The direction has to the given only by the Supreme Court, they argued at Madras High Court.

As per the intricacies analysed by the author in the book, Madras High Court has delivered the verdict that there is no need for the apex court to direct. The Tamil Nadu State Act validated by the constitutional provision is already available. The OBCs are entitled to get reservation in All India Quota. Only the Centre has to finalise it by forming a committee with the participation of States.

But the author amplifies the fact that the formation of ‘All India Quota’ itself is misconception of law and Constitution. Demarcation and separation of powers in between the Legislatures, Judiciary and Executives is the vital basic structure of the Constitution that cannot be violated. ‘The Entry 32 in List II (State List) empowers the States to establish and regulate the universities. And Entry 44, List I (Union List) prohibits the Central government to establish and regulate a university…. under Entry 66, List I, the Central government gets the power only to fix the standards of medical education. That does not include the power to regulate admission of students to medical colleges as held by a FIVE Judge Bench of the Supreme Court in Modern Dental College Vs. State of Madhya Pradesh case. The constitutional provisions as well as subsequent pronouncement of the apex court reveal the fact that the formation of ‘All India Quota’ is unconstitutional.

Article 1 of the Constitution says ‘India …….. shall be a union of States’ that spells out the federal nature of India’s polity with due and exclusive governing powers to the States. Those powers cannot be deprived of by the interference and unilateral decision of the Centre. With the governing powers provided constitutionally, the States are formulating their policies and making progress. The progress made by the States should not be curbed by the Centre through any means which is nothing but unconstitutional.

One such encroachment by the Centre in the Governance territory of States is creation of ‘All India Quota’ in Medical Colleges. Establishing Medical colleges with the State exchequer, contributing the seats to the Centre for AIQ, appealing for the adherence of State reservation policy in the contributed seats and the so far denial of reservation for OBCs are nothing but blatant inference in the governing affairs of the State by the Centre. It is nothing but making mockery of the Constitution. Rulers who owe their respect and allegiance to the Indian Constitution should not break their taking oath of office.

The author has highlighted the inadequacy in the understanding of the letter and sprit of Indian Constitution by all the pillars of our democratic polity. With his acumen in the Constitutional Law of the country, coupled with the rich experience of discharging the service as High Court judge, many issues have been discussed and narrated to make the readers in all walks of life who evince concern for the proper governance in the country.

The excerpts of the various judgments by the Supreme Court have been annexed in the book and to that extent the searching time by the readers have been saved. The book by Dr. Justice A.K. Rajan is a value addition to the library of everyone especially the personnel in the higher judiciary, the executive and legislature who are directly associated with the issues discussed in the book. This is the master piece of micro analysis of the issue of dispensing social justice from legal and judicial angle.