Apathy and Distress at its PEAK! 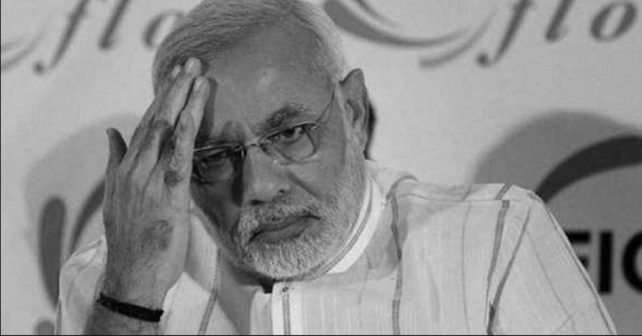 The saffron forces with its political outfit, BJP entered the poll fray in 2014 with bounty of promises, knowing well that they could not be carried out as one of the cabinet ministers blurted it out later. By effective strategic approach which is the capital for the corporate like ruling combine, they were able to garner more than the sufficient mandate to rule the vast subcontinent from the Centre. Devoid of any constructive ideological back up, the BJP rule got exposed step by step through its lack of knowledge on the outcome of its much hyped policy measures. Without any preparation for any alternatives better than the present ones, they started to abolish the time tested planning bodies, simply for the reason that they were established by the earlier regimes. Any change in governance should not be for the sake of change, but for the cause of better governance offering betterment for the people. The process started with the substitution of NITI Ayog with Planning Commission, an apex autonomous body responsible for the development of the country for more than half a century. The newly formed NITI Ayog has not impacted any visible result, except having functioned as the mouth piece of the Central government. One of the poll-promises made by the BJP was bringing back ‘black money’ of Indians, deposited in foreign countries. The promise did not stop with that. The black money likely to be brought back would be evenly distributed to the citizen as per its hilarious announcement that Rs 15 lakhs would be deposited in the bank accounts of every citizen. Can anyone understand the development economics, behind this promise? Has the government in any other country planned, like this? BJP may name it ‘Hindutva’ economics!

The ‘Black Money’ economics did not stop with it. In order to arrest the black money and devalue it in indigenous parlance, in November 2016, demonetisation of Rs 500/- and Rs 1000/- currency notes was announced without adequate consultation, analysis and preparatory work to face the demonetised environment. The prediction on demonetisation was that the sizeable chunk of black money would be in higher denomination currency notes, which would be made worthless, but contrary had happened. Almost all the demonetised currency notes, which were in circulation came back to RBI through banking channels. The outcome defeated the purpose of demonetisation with the sacrifice of 100 lives who stood in queue in front of bank branches to exchange their demonetised currency notes. By and large, the demonetisation facilitated the conversion of black money into white money, the accounting of which has not started at all. This sort of governance is like testing the single rice to ensure the cooking of rice in the entire boiling pot!

On social justice friend, nothing tangible was carried out by BJP government. The constitutionally guaranteed reservation policy is more observed only in breach. In the Supreme Court there is no representation for judges belonging to the Schedule Castes and there is no due representation to Other Backward Classes.  This is the most unkindest cut of all!

On agrarian front, the apathy of the peasantry and the distress, experienced by them are alarming and the gravity is immeasurable. During 2014 elections, promises were made liberally like, farmers income would be doubled, farmers’ debts would be wiped out through the waiver of loans, etc. The only achievement on farm front was stop-revealing of farmers suicides enumerated by National Crime Records Bureau from 2015 onwards. However during the total period 2013–2015, a record number of 1,33,623 farmer’s suicides have occurred.

The BJP rule has projected the fixing of Minimum Support Prices (MSPs) for selected agricultural crops at 150 per cent of the respective cost of cultivation. The announcement continues to remain as mere announcement. No adequate procuring centres are available to enable the farmers to get the announced MSPs. On the contrary many of the existing procurement centres have been closed, enabling the States to receive the blame which had acted as per the direction of the Centre.

The obsessive achievement accomplished by the BJP at the Centre was mere tracing the references for scientific advancement from mythology and scriptures, to claim the ‘saffron pride’ as if such science and technology prevailed in ancient days. The utterances of BJP’s prime leaders including PM Modi show their inability to, in fact deliberate ability not to distinguish between the scientific proof and the scribbling from scriptures.

The politics of statuary has assumed the major activity of BJP rulers. The record-break size in height of the earlier home minister of the country is installed. The next installation of statue for ‘Rama’ has been announced. Simultaneously, demands are also forthcoming to install statue for Sita. After upholding the caste identity of humans, the saffron leaders have started to debate on the caste identity of animal god, Hanuman!

When the farmers of the country are conducting ‘massive march’ as well as persuasive demonstrations, even an opportunity of hearing their grievances was not forthcoming from the helm of governance. Perhaps this may be the style of “Maximum Governance and Minimum Government” as promised by Modi during the election campaign. Still the saffron rulers do not bother about their social and economic accountability of their governance but the saffron rulers cannot avoid the political accountability. Yes. The five year ruling tenure is at the nearing end. In 2019 elections, the electorate would question the political accountability of the saffron rulers and exercise their franchise ventilating the sufferings due to the failure as well as distorted direction of the secular governance of the country. The apathy and distress of the people will be reflected at the time of the parliamentary elections 2019. Until then, the electorate has to be vigilant about distinguishing the popular announcements, made by the Central BJP government to mask their failures of more than four years, to grab the vote from public! Eternal vigilance and exercising the rights is the price of democratic governance.