“Arguments and NOT Answers on Poverty”, merits Nobel Economics Prize 2019 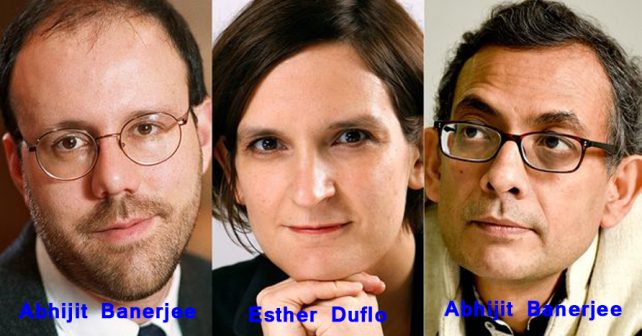 For the 2019-Nobel Memorial Prize for Economics, Abhijit Banerjee, Esther Duflo and Michael Kremer, the professors of Economics at Massachussetts Institute of Technology (MIT), USA, have been selected. The Award is for creating a new field of experiments viz. Randomised Controlled Trials (RCTs) on poverty across many countries. Abhijit Banerjee is India born and his wife Esther Duflo is of French origin.

The assistance programmes are implemented to help the poor but their assumptions are based on generalisations. But the real reduction or eradication of poverty is based on how the impoverished make decision on education, savings, healthcare, food and other issues. Professors Abhijit Banerjee and Esther Duflo have founded JPAL (Jameel Poverty Action Lab) and are conducting researches on poverty. “RCTs can play a role in building scientific knowledge and useful predictions but they can only do so as part of a cumulative programme, combining with other methods, including conceptual and theoretical development, to discount not “What Works” but “Why things Work”. More than the success of the poverty eradication, the research was on the reasons for the failures. Such an approach brought the probability of more success stories at global level in poverty eradication.

Mere allocation of funds either by indigenous government or through foreign aid is not sufficient. Generalisation of the programmes will not increase the percentage of success. Results obtained in one sector or country will not necessarily be replicated in other sectors and countries. Outcomes will vary, depending on local political systems, macroeconomic politics, quality of governance, skill levels, infrastructure, culture, traditions etc. The experiments conducted showed that major programmes could be evaluated accurately by RCTs; that they could unearth unexpected successes and failures and throw lights on the reasons; and that people (parents) often need an inducement to do what is in their self-interest any way. RCTs have never guaranteed that what works in one place will not work everywhere. They reveal grass root truths, and clear lesson from failures no less than success. RCTs are new experiment tools to move forward in the fight against poverty throughout the world.

Abhijit Banerjee is the second Nobel laureate for Economics of Indian Origin next to Prof. Amartya Sen.Both were awarded the prize for their contributions to the cause of poverty and its eradication. Abhijit Banerjee and Esther Duflo have conducted experiments in Kenya, India and may other countries where the prevailing poverty is the major impediment for the development. In India they have been working with the State Governments – Gujarat, Haryana, Punjab and Tamil Nadu.

The comments and remarks of Abhijit Banerjee about the prevailing global economy in general and more specifically Indian economy, its development planning :

*             Economics can be a way out of most social and political problems including immigration, globalization, slow economic growth as well as climate change. The resources to address such issues are already there but we lack the ideas to overcome the divide and distrust that plagues us.

*             Foreign aid can lend a helping hand in reducing poverty. While billions of dollars flow into poor countries, they are ill used. Lack of analysis causes considerable waste and inefficiency in this regard. The Donors should conduct randomised controlled trials, to access the situation.

*             Lower the level of financial development in the country, the more detrimental the impact on volatility on growth.

*             We don’t try to say here is the answer to the problem (poverty) we say this is the reason why the answer may be different from what you think. It is not about answers but about arguments to get to the answers.

*             We have so many less poor and that’s a positive. There is no magic wand to make all the poverty go away. Growth is skewed towards the rich, the impact of poverty has been substantial.

*             The implementation of some policies is ham-handed we don’t know how much initiatives like Jan Dhan will actually enrich people. Is it a sensible idea for everyone to have a bank account?

*             You can disagree with the implementation or the measurement of certain things or the claims being made etc., but overall we are not in a bad place.

*             China has done one critical thing which we have failed to do; that is going for labour intensive manufacturing. India did create jobs in real estate, services but not in manufacturing. And that’s one sector that can absorb millions of people.

*             5 per cent growth is now good and soon there will be even less. India is doing great. We are obviously not doing so great. The government (Central) cannot sell the economic message, there are other messages to sell to win elections.

*             Governments can do two things in bad times to protect the poor – not slashing social programmes and using the existing money even better.

*             The experiments with RCT approach duck the question of there being a single cause of poverty. What it says is that there is a bunch of different reasons why people are poor. It is not that one day the god of anti-poverty would come and press one button and it will all get fixed. That never happens.