ARREST OF THE JOURNALIST 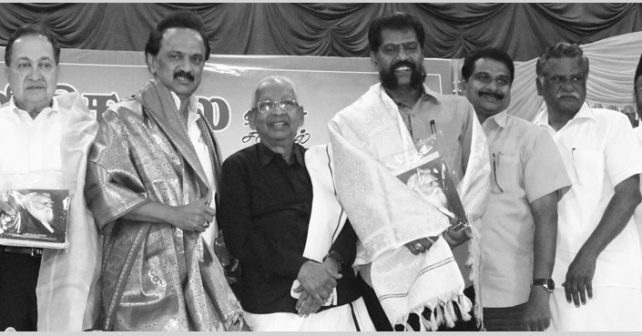 “The dry run attempted by the Tamil Nadu State Governor’s office, in the form of the arrest of the Editor of Nakkheeran, as a prelude to abrogating the rights of the fourth estate and throttle democracy has miserably failed in the court of law, which categorically stated that the IPC Section 124, invoked by the Raj Bhavan is not applicable to the case. Since the entire responsibility for this failure falls on the Governor, this meeting urges the Central Government that the Governor may be recalled”.

This unusual resolution, moved by Asiriyar K.Veeramani, President, Dravidar Kazhagam and Editor, Viduthalai was unanimously passed by the mammoth gathering in Chennai who had come to listen to the journalists in a meeting on ‘Press Freedom – Protection and Felicitation’ convened by Viduthalai Tamil Daily of The Periyar Self-Respect Propaganda Institution following the hasty arrest and quick acquittal of Gopal, editor of Nakkheeran Tamil weekly.

It happened in the morning on 9th October, when Gopal was at the Chennai airport, with two of his colleagues, to board a flight to Pune.  When he went to the rest room, the Assistant Commissioner of Police, Airport, accosted him.  Within minutes there arrived the Deputy Commissioner of Police from Adayar with a posse police constables and besieged the beleaguered editor.

His queries as to the reason got him no proper reply.  Gopal conveyed to his colleagues that he had been surrounded by the Police.  Even they were detained at the Airport and subjected to enquiry for about two hours before they were permitted to go away.

The Police told Gopal nothing more than that a complaint had been registered against him and nothing about where he was being taken.  Finally by the time he was taken to Chintadripet Police Station, Chennai news regarding his arrest had spread like wildfire throughout the City and beyond, and media persons made a beeline to Chintadripet.  None was permitted to meet him including his own lawyers.

The fascist move created ripples in the political scenario too. Vaiko’s immediate reaction was a press release condemning the highhanded action, after which he airdashed to Chennai and wasted no time in going to the Police Station, where he showed his lawyer’s visiting card to the police and sought permission to meet the prisoner as a lawyer.  Permission having been denied, he condemned the Police atrocity in no uncertain terms.

Amidst rumours spreading all over the city that the entire Nakkheeran staff was about to be arrested, the police took Gopal to Kasturba Hospital, Triplicane, for medical checkup.  Many of the DMK functionaries came to the Hospital, when the President of the Party Thalapathi M.K. Stalin managed to have a meeting with the writer.  Stalin warned the State Government of a severe backlash, if Gopal were not released.

Only when Gopal was presented to the magistrate, it was known that Section 124 of Indian Penal Code was slapped on him. Soon Thol.Thirumavalavan of the VCK,
R. Mutharasan of the CPI, N. Ram of the Hindu Group of Newspapers and others had reached the scene in no time.  While legal arguments were going on for and against, the magistrate sought the expert opinion of N. Ram of the Hindu group.  The latter pointed out that though papers had written articles and editorialized both commending and censuring the Governor, not once had section 124 been invoked.  If the police action was permitted, it would set a bad precedent for the whole of India, warned Ram.

The argument on the journalist’s side was that the said section could be invoked only if the Governor had been physically prevented or assaulted.  But in the present case Gopal had not even seen the Governor. Finally, the magistrate accepted the arguments and set him free.

Just two days later a special meeting was organized under the auspices of Viduthalai, to congratulate Nakkheeran Gopal and to warn the government of serious repercussion if the fascist trend were to continue. Speaker after speaker condemned the government for its high handed action against an investigative journal which was well within its rights to publish whatever it considered was in the best interest of the society, provided it was not false or fabricated.

The magistrate who had applied his mind to the issue involved, unlike those who endorsed the police version without giving it a second thought came in for special praise by almost every speaker.  A. Kumaresan, Editor, Theekathir of the CPI (M) said that if the story of Tamil media were to be chronicled, Nakkheeran Gopal’s name could not be avoided.  R. Mutharasan of Janasakti asserted that the Government of TamilNadu had set a bad example by acting on a complaint from the Governor’s office. In fact, as per the Constitution, it was the Governor who had to act on the advice of the ministers.  In Tamil Nadu justice was different for the Brahmins and the non Brahmins.  Under the circumstances how could people continue to have faith in the judiciary and the rule of law, he wondered.

AN ACT OF CLEANSING!

As part of the cleansing process constantly carried on by the short sighted BJP Government, the standing Committee of the University of Delhi which met on 25th October has decided to remove three works by the acclaimed scholar and Dalit activist Dr. Kancha Ilaiah from the curriculum of the master’s course, political science.  It has also proposed to stop the usage of the word ‘Dalit’ in its transactions.  Commenting upon the works concerned ‘Why I am not a Hindu?’, ‘Buffalo Nationalism’ and ‘Post Hindu India’, Prof. Hansraj Suman said that they put Hindu religion to shame.  Kancha Ilaiah complained that academic freedom is being destroyed in the BJP rule.

Nakkheeran Gopal acknowledged that if he had been set free by the court, it was because of the concerted support from the media, people’s upsurge and the positive note played by the leaders.  Quoting the provisions of Section 124, he affirmed that it could not be invoked unless the Governor was physically prevented from discharging his duties.  Then, the writer asked, how it was slapped on him when he had not even been face to face with the Governor.

Asiriyar K.Veeramani warned that today democracy has been admitted to the intensive care unit.  If Gopal was arrested on a complaint received from the Governor, the Asiriyar asked whether the State was ruled by an elected government or it was under the Governor’s rule. IPC Section 124 required that the President or the Governor must be prevented from discharging their legal duties.  Further, it must be intentionally done.  “Can it be said that Gopal acted in this manner?  Is there no place in this country for freedom of expression?  Is the country under an undeclared Emergency?”

Thalapathi M.K. Stalin, President of the Dravida Munnetra Kazhagam, speeking on behalf of Murasoli daily, commended Asiriyar K.Veeramani for having organized the meeting in such a short notice, since he was always first in raising his voice whenever there was a threat to the Dravidian Movement or whenever freedom of expression was in danger.  Giving details of Nirmala Devi case, in which the Governor got mentioned and he (the Governor) himself had appointed an enquiry commission, the speaker asked how could Nakkheeran be blamed for taking up the thread.  There was no provocation whatsoever for invoking IPC Section 124 at the Governor was moving about throughout the State without the slightest mischance.  He concluded asserting that these would continue until the Governor was recalled.

It looks as though the battle lines have been clearly drawn.  On one side is the power drunk Governor, presiding over a spineless government and existed by a very, very compliant police ready to carry on any dirty trick.  On the other side is Nakkheeran Gopal, out to cleanse the society of political rubbish with his pen, with courage of conviction and supported by freedom loving media and leaders wedded to democracy.

Who will win?  Shall we echo the motto of the Government of Tamil Nadu and say: TRUTH WILL WIN