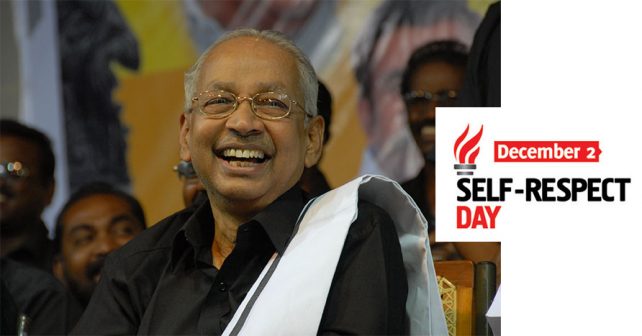 Asiriyar Dr K Veeramani, President of Dravidar Kazhagam and Editor-in-Chief of The Modern Rationalist steps on his 89th birthday on 2nd December 2021. His birthday is being celebrated by the cadres of Periyar Movement and well-wishers as ‘Self-Respect Day’.

As a disciple of Periyar, and groomed by his school teacher, Asiriyar commenced his first speech on a public platform at the boyhood age of 9. From then onwards, as he grew, his association with Periyar and the movement intensified. As a meritorious student, starting from his school studies, he joined Annamalai University and came out as rank holder (Gold Medal) in Economics (Hons) degree. Then he joined Madras Law College and became a lawyer. All through his academic studies, his association came closer to Periyar and organisational activities.

After a brief period of practising as lawyer at his native place Cuddalore, in 1962 Asiriyar moved to Madras (presently Chennai) as per the appeal made by Periyar to assume the Editorial responsibilities of the Tamil Rationalist daily ‘Viduthalai’, founded in the year 1935.

He became a full time functionary of Dravidar Kazhagam. During its formation in 1944, Asiriyar had the privilege of addressing the conference at the age of 10, that captured the attention of the elderly leaders in the movement.

Then Periyar made Asiriyar the Secretary of Dravidar Kazhagam. After the passing away of Periyar in 1973, Annai E.V.R. Maniammaiar, accepted the leadership which was later assumed by Asiriyar in 1978. Asiriyar led the movement by organising and conducting significant struggles and brought remarkable achievements to Periyar Mission.

The organisational activities of Asiriyar as its apex leader brought many laurels, starting from mobilising people country wide for the implementation of Mandal Commission recommendation in 1992, when V.P. Singh was the prime minister, enabling the enactment of exclusive legislation in 1994 by the Government of Tamil Nadu to protect the total reservation of 69 percent. The Act had been prevailing with the due inclusion of the Act in IX Schedule of Indian Constitution through the 76th Constitution Amendment. Besides a year long struggle and public propaganda were conducted against the G.O issued by the Government of Tamil Nadu in 1979, stipulating economic criterion, to extend reservations for the depressed people. The G.O that was against the Constitutional provisions was withdrawn consequently.

Asiriyar Dr. K. Veeramani, like his mentor Thanthai Periyar, was not confined to propagate ideals but conducted agitations, courted arrest and endured imprisonment. He appealed and compelled the political rulers to bring about suitable legislations or executive orders on the issue concerned for the public cause.

In that path of swimming against the current, Asiriyar got arrested 54 times and incarcerated many times and about a year under MISA during the emergency period. Attempts on his life have been made 6 times, and the consequential injurious infirmities still exist in him.

Social Justice is the core point of Periyar ideology to establish an egalitarian society. Following the foot prints of his mentor, Asiriyar was the initiator and facilitator for 76th Constitution Amendment in 1994 and 93rd Amendment in 2005.

In 1951, Periyar was the massive and imperative force behind the insertion of Article 15(4) in the Constitution through the 1st Constitution Amendment in 1951 to enable reservation for the backward classes including the Scheduled Castes and the Scheduled Tribes throughout the country.

Dravidar Kazhagam is basically a party that does not participate in elections. By mobilising public opinion and giving thrust to the rulers, Periyar and Asiriyar have been carrying out the required legislative and executive directives in the mode of governance of the State.

Publishing daily / magazine is the unique propaganda tools for Periyar movement. For the rationalist daily ‘Viduthalai’, fortnightly ‘Unmai’ and childrens’ monthly ‘Periyar Pinju’ in Tamil and for the English monthly ‘The Modern Rationalist’ Dr K. Veeramani has been the editor, that became honorific as ‘Asiriyar’.

DK is a social revolutionary movement devoid of violence in its functioning. Founded by Periyar, it is being led now by Asiriyar beyond Tamil Nadu – India and worldwide.

Globalising Periyar Mission is the committed contribution that is being carried out by Asiriyar; ‘Periyar World’ project of about 100 crores with the installation of 95 feet high statue of Periyar (with 40 feet pedestal) is coming up near Trichy, with science exhibition, library, children’s park, wax museum, etc. Asiriyar’s lifelong dream of ‘Periyar World’ would be realised within a period of 5 years. Asiriyar is active on his 89th birthday. Commitment to the core of Periyar and carrying out Periyar Mission will definitely enable Asiriyar to live long.