Belief in God Questions and Answers 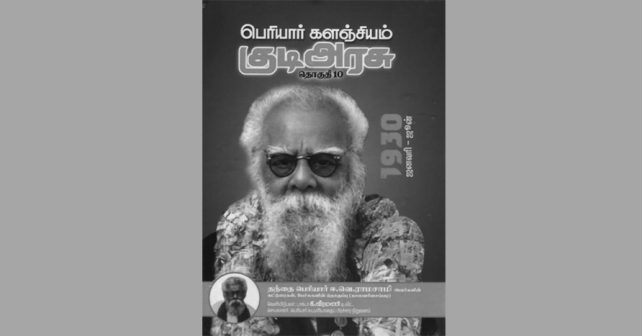 Q: Even if we toil a lot we don’t get stomachful of food.  But Brahmins, without working, get more than what they need.  What is the reason?

A: Our religion and caste system.

Q: Though we work hard, our children are unable to pursue education and ninety per cent of us remain illiterate, while cent per cent of Brahmins are educated, what is the reason?

A: Our religion and caste system.

Q: Why are our rich families gradually becoming paupers?

A: Our fate.  Our people do not worry about their own people starving and remaining illiterate.  They give everything they have to Brahmins, and sponsor their education.  As a result of this ‘sin’ Brahmins become judges and lawyer and impoverish the non Brahmins.  Nothing can be done about it.

Q: When is prostitution to be condemned?

A: When it is known to the public.

Q: What is wrong in becoming a Christian?

A: None. But do not drink in the name of religion.

Q: What is wrong in becoming a Muslim?

A: None.  But don’t cover women’s face with veils.

Q: What is real chastity?

A: Living in harmony with a person who is to one’s liking.

Q: What is ‘fake’ chastity?

A: Living in the company of a person against one’s liking, but owing to the fear of the public, god, hell, money or brutality.

Q: What is religion?

A: Fighting nature and controlling it

Q: What is the self respect custom followed in Nattukottai Chettiar Society?

A: The groom does not tie thali around the bride’s neck

Q: Why are holidays given to the workers on festival days?

A: So that they can waste all that they have been earning and saving through hard work.

Q: Why were women prohibited from getting educated?

A: So that they can be branded as lacking in intelligence and talents and can be enslaved.

Q: What should be done if the anxieties and cares of menfolk are to be lessened?

A: Women’s subjugation must be done away with and they must be given complete freedom. This will free men from a lot of heartache.

Q: What should be done to enable women to save their time?

A: A lot of time will be saved if their hair is cropped.

Q: What should be done if women’s hands are to be given some rest?

A: Their hands can get some rest if women start wearing overcoat.  Otherwise they spend a lot of time in adjusting their saree front.

Q: What should be done if everyone must be assured of food?

A: If everyone stops taking more than what they need, everyone will get enough for them.

Q: Who is the greatest fool?

A: One who does not believe in what he learns through his intelligence and experience, but believes in what some one has said at sometime in the past and lives in accordance with it.

Q: What is good conduct?

A: Conducting oneself in such away as not to cause trouble to oneself and others.

Q: What is religious restraint and caste restraint?

A: What prevents one from conducting oneself according to truth and one’s own conscience.

Q: What in fact is belief in god?

A: What is considered to be sincere belief in god is making all efforts to protect god out of fear that he might vanish.

Q: Why should India not have democracy?

A: As ninety per cent of the Indians are totally illiterate and are unable to discern what is good and what is harmful for them.

Q: What is democratic form of government?

A: Where anyone who wields a stick can wield power.

Q: What must be done if the population of India must increase?

A: People must stop begetting children in large numbers and get widows remarried.  It will ensure healthy and sturdy offspring.

The following is the number of people who have been called by god to his own feet:

If we add to this the number called to his feet through thunder, lightening, volcanoes, floods and cyclones, it will be many times more than this.  We are unable to find ways of praising such unlimited mercy of god.  Let us, therefore, leave to it to the pundits.  They are adept at it.

If there were a god…

If there were a god he would have conducted himself as per the wishes and needs of men.  Or he would have saved man from feeling the need for and running after those things which are not to god’s liking.  He might have prevented them from entering man’s thoughts.

For example, we see man shaving of the hair from his face as he finds it unwanted.  But through god’s grace it keeps growing day after day.