Periyar seemed to be aware that Bhagat Singh had no faith in God and in divine dispensation, but was a man of self-confidence.

Bhagat Singh became a national hero immediately after the Assembly Bomb Explosion on April 9, 1929. Till then he was known as a thinking young nationalist among the Naujawan Bharat Sabha activists in areas around Punjab. He had also grown into a popular ideologue in the underground circle of revolutionaries of Hindustan Socialist Republican Association (HSRA). However, it was this daring act on April 9 which catapulted him to national fame. As planned in advance, the court hearings during the trial were used as a platform to address the fellow Indians and sensitise them about HSRA’s ideology and programme. His writings from the prison were surreptitiously sent out and published by the nationalist press. The martyrdom of Bhagat Singh on March 23, 1931 led to a widespread condemnation of the act and also support for the politics he espoused in his short life.

One of the most articulate and strong reaction was seen in far away Tamil Weekly called Kudi Arasu, where Periyar E.V. Ramasami wrote an editorial on March 29, 1931. Besides being critical of Gandhi and the Congress for failing to save him, Periyar saw in young Bhagat Singh an ally who stood for rationalism and spoke against caste oppression. He began by writing “there is no one who has not condoled the death of Mr. Bhagat Singh by hanging. There is none who has not condemned the government for hanging him.” The above lines reflect the widespread acceptance of Bhagat Singh as a national hero, much beyond the limits of Punjab, and more significantly, within this short political life. There is no reason to believe that his persona was created by scholars through their exploration and interpretation of historical records. 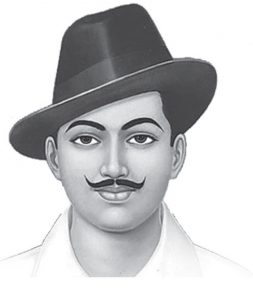 Periyar goes further to reiterate the ideals upheld by Bhagat Singh and says that “If Bhagat Singh has come to the firm and sincere conclusion that all his principles were correct, and that the methods he had used were the just ones, then he should have definitely conducted himself only in the way he did…. It is our strong view that only Bhagat Singh’s principle is needed in India.” He was clear that Bhagat Singh’s principle represented socialism and communism and as an evidence to prove his point Periyar used two lines from Bhagat Singh’s letter written to the Governor of Punjab saying: “Till Communist Party comes to power and people live without unequal status, our struggle will continue. It cannot be brought to an end by killing us: it will continue openly as well as secretly.” There were many in India who closely followed Bhagat Singh’s trial and statements in the court and Periyar was surely amongst them. In the famous statement on June 6, 1929, Bhagat Singh said, “The whole edifice of this civilization, if not saved in time, shall crumble. A radical change, therefore, is necessary and it is the duty of those who realise it to reorganise society on the socialistic basis. Unless this thing is done and the exploitation of man by man and of nations by nations is brought to an end, sufferings and carnage with which humanity is threatened today cannot be prevented.” Periyar Ramasami was inspired by similar sentiments and was engaged in the 1930s in organising industrial and agriculture workers to fight against the big capitalists and landlords. This struggle invited the wrath of the colonial government leading to the ban on Communist Party and other like minded organisations.

Bhagat Singh was led to the gallows.  Before the noose was put around his neck, the Sikh soldier Sukhvindar Singh who was had to carry out the execution, whispered the Sikh incantation ‘Satnam Vahe Guru’ (I will be true to god) into his ears and asked him to repeat it so that his soul would reach heaven.  But Bhagat Singh refused to repeat it even when he was face to face with death.

I have always been an atheist, and I want to die an Atheist.  It I utter those words at the time of death, the society would start doubting atheism.  I am dead certain that there is no god.  Everybody knows it.  Then he took the noose and put it around his neck.  Such was his commitment to his principle.

Periyar, in his editorial, seemed to be aware that Bhagat Singh had no faith in God and in divine dispensation, but was a man of self-confidence. Bhagat Singh wrote on this subject in detail in one of his most profound essays called “Why I am an Atheist.” It was written during his prison years and was surreptitiously brought out and published in a nationalist paper, The People. Here Bhagat Singh zealously condemned blind faith and put up a passionate defence of reason. He was convinced that religion is a tool in the hands of exploiters who keep the masses in constant fear of God for their own interests. The revolutionaries of HSRA realised that all moral ideals and religions were useless for an empty stomach and for him only food was God. Periyar, in his editorial, vindicates these views and writes that “holding such views is not a crime under any law. Even if it is considered to be against any law, no one need to be afraid of it because, we are sure, that following those principles [that Bhagat Singh upheld] will not do any harm or cause any loss to public….We endeavour to put the principle into practice.”

Bhagat Singh was not only against communal and divisive politics, he hated and mocked at the Indian caste system, which makes the people untouchable on the basis of their birth in a particular caste. He reiterated in his writings and statements that all exploitations-economic, social or cultural, had to go if we want to build a strong nation. Echoing these views in his own way, Periyar wrote further in the editorial that “to abolish untouchability we have to abolish the principle of upper and lower castes. In the same manner, to remove poverty we have to do away with the principle of capitalists and wage-earners. So socialism and communism are nothing but getting rid of these concepts and systems. These are the principles Bhagat Singh stood for.” Periyar concluded his piece by saying that “Bhagat Singh had not fallen sick, suffered and died as it normally happens with people. He gave his life for the noble cause of showing to India, nay to the world, the path of real equality and peace. He has reached a great height, a feat never achieved normally by anyone else.”

Bhagat Singh’s ideal and supreme sacrifice has the potential to enliven millions of struggling lives. Like Che Guevara, Bhagat Singh will continue to inspire all those who are committed to secular socialist values and reject the caste based hierarchical society.