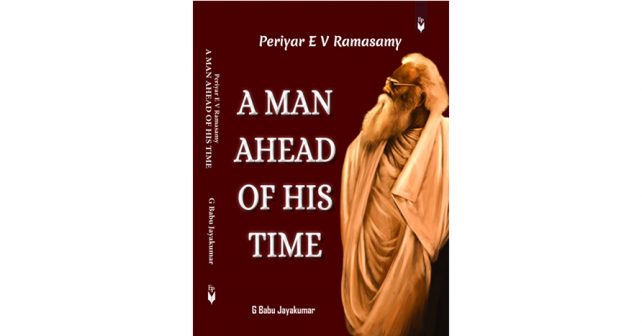 Many writers have documented in English the biography of Thanthai Periyar, a relentless revolutionary who had lived 95 years witnessing the horizon of sea change in the socio political scenario of Tamil Nadu. The latest addition to it is ‘Periyar E.V. Ramasamy – ‘A Man Ahead of his Time’ written by G. Babu Jayakumar, a veteran journalist. This biography is distinctive by its comprehension of the life of Periyar in 20 chapters starting from ‘Born Rebel, Exemplar of Equality, Exploring the world, Fervent Feminist, Fighter till the end and Lasting Legacy, to mention a few.

The background of Periyar’s orthodox family did not influence him and on the line, he groomed himself. Not having completed formal primary education, he studied the surrounding and society and found out the contradictions and indifferences among the people. Resultantly ‘All humans are equal’ – this ideology stuck in him from the beginning. “Since the discourses and recitals staged inside the house related to both Vaishnavism and Saivism, the two leading streams of Hindu faith, Ramasamy managed to master the nuances of the religious philosophies, the legends and epics related to them by lending his keen ears to the proceeding.” The author has narrated the incidents Periyar witnessed in his boyhood that made him an original thinker and activist by establishing the suitable organisation to accomplish the mission. The narratives about Periyar’s life in print form enable the readers to visualise, the incidents that carved out “Thanthai Periyar”.

Periyar’s core philosophy is ‘equality of humans and equal opportunities to them’, culling out the hurdles however powerful, cunning and tactful they are. Periyar struggled against the injustice inflicted on the society in a stratified manner, discriminating and suppressing people in the name of Sanatana dharma.

The toil of Periyar made Madras Presidency, now Tamil Nadu as the cradle of Social Justice of India and laid a firm foundation for the robust reservation policy. The author narrates, ‘the idea of communal reservation had been close to Ramasamy’s heart ever since he started understanding the social environment and realising the prevalence of inequalities based on caste”. Further it is explained, ‘even before his entry into active politics, he had realised that Brahmins had usurped most of the available government positions in the country through their ‘jobs for Indians’ demand to the British region. The passage briefs the historical conditions, prevailed more than a century back.

How did the contributions of Periyar extend beyond Tamil Nadu? When Madras High Court struck down the communal G.O. that was in vogue in the State on July 28, 1950, that was one occasion which saw Periyar mobilising the public anger including calling upon the student community to the streets and agitate. The collective anger of Tamil Nadu was felt in New Delhi and the First Amendment to the Constitution rectified the anomaly. It conserved reservation in Tamil Nadu besides making it applicable for other States. The simple and lucid language of the narrative would definitely make the readers know how Periyar mobilised the public with hardships to sustain the dispensation of Social Justice.

The book reveals the stand taken by Periyar in favour of ‘Panchamas’ (the Scheduled Castes) when they face discrimination from their non brahmin (Sudras) supporters. Periyar reminded such supporters that any speech or action in favour of Adi Dravidars (SCs) and every effort made for their betterment would benefit every Meedhi Dravidars (sudras), meaning rest of Dravidians.

On women liberation Periyar contributed in a different manner which no other leaders had. “Unless women demolished the notion of masculinity, they can never dream of liberation, because men believe that freedom and valour were the prerogatives of the masculine gender, a notion that even women had been meekly accepting for long……

“Marriage, in the Indian context, is nothing but enslavement of woman…….. subjugation is camouflaged with marital rituals, infusing a divine aura that deserves the woman”. All these writings / speeches of Periyar did not remain as mere propaganda. He practised the progressive deeds. He conducted ‘widow marriage’ to his sister’s daughter much against the initial knowledge of his family members. All the ideological propaganda have been associated with relevant accomplishing endeavours that make the reading and understanding interesting.

The ideological followers of Periyar have spread in many a mainstream political parties in Tamil Nadu. Even the followers who organisationally departed and chose strategic political line by forming DMK, did not deviate from the ideologies of Periyar. Many of the social perspectives of Periyar acquired the legal status during the rule of his followers in Tamil Nadu and a few such perspectives were accorded legal status by the Union government, applicable to all the States of the Union.

Periyar passed away in 1973 and the organisational (Dravidar Kazhagam- DK) leadership was succeeded by E.V.R. Maniammaiar and continued till her passing away in 1978. Presently DK is led by the ideological disciple of Periyar, Dr. K. Veeramani. The organisational legacy continues in furtherance and the legacy is also protected from being fabricated and distorted by the ideological opponents.

The long life history of Periyar is concised covering the vital happenings through facing the challenges and overcoming them on the foot prints of Periyar. No doubt, the book suits the readers, especially younger generation who want to know more about Periyar, with authenticated narrative than they know from hear and say. The legacy of Periyar will live long like his life span, for its revolutionary nature and that is aptly chosen as the title of the book, ‘A Man Ahead of his Time’.