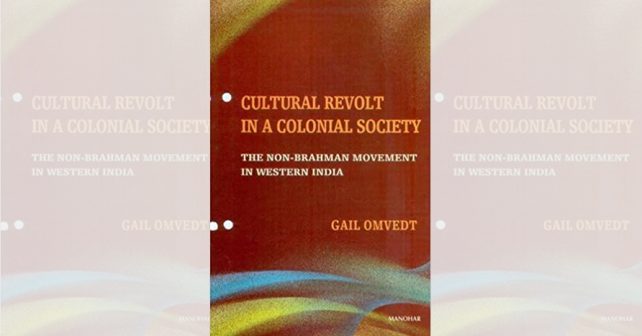 ‘Cultural Revolt in a Colonial Society – The Non-Bhraman Movement in the Western India’ is a concised, reader friendly format of the doctoral thesis of 1973 at California University by Gail Omvedt. The volume narrates elaborately the mass social movement, Satyashodhak Samaj (1873-1919). The movement was limited to the Marathi speaking people but it did not spread outside of what is now Maharashtra, even though, the ideas of the movement is of all India nature. The entire functioning of the movement was centering on the core dominant sect of the society that caused many gradation in the social structure of the land.

The research study has diagnosed the main cause of the social evil by quoting the theory of the French socialist, Louis Dumont – the theory to the larger degree as a polemic against those who would hold an economic or a historical – racial interpretation of the ‘caste system’. The theory, argues that the central ordering feature of the system is a religious one i.e., its value system of purity – pollution and hierarchy and that while in those terms economic and political aspects are given a place, they are secondary to or encompassed by the central religious values. It has been undeniably proven.

Gail matches the theory with the social realities in the western parts of India during the British colonial period. The social oppression, camouflaged under religious carpet got exposed in the 19th century from the royal descendent to ordinary man. The denial of the rights of education and employment of preference were propagated on a mass scale. The significant stalwarts who toiled for the uplift of the socially downtrodden were the royal revolutionary, Shahu Maharaj (1874 – 1922) of the Princely State of Kolhapur and Mahatma Jyothirao Phule (1827-1890), the founder of Satyashodhak Samaj.

The Vedokta controversy that sowed the seeds of conflicts in Shahu’s administrative policies. ‘Vodokta, otherwise known as Vedic religious rights were meant for Kshatriyas as well as Brahmins. The Puranokta rites were the one the Shudras were entitled to. The Maharaj discovered in 1900 that he was receiving only Puranokta rites from hereditary priests. The Maharaja was concerned about the insult to his purity of lineage, he was insisting on receiving proper recognition as a Kshatriya. The hereditary high priest refused to offer Vodokta rites to Maharaj with the result his inam land and the lands of the Jagadguru Sankaracharya, who backed the hereditary high priest were confiscated by the royal rule.

The Vodokta controversy enabled the Maharaj to take the most firm step to bring non-Brahmins into the administration by issuing an order in 1902 reserving the 50 per cent of the vacancies in the administration for members of the ‘backward communities’. This was the beginning of the reservation in India.

About 30 years prior to the royal revolutionary deeds, Jyothirao Phule diagnosed the social disease and started the remedy on the mass scale by founding the Satyashodhak Samaj. What was denied to the toiling masses historically has to be provided as remedy. The social insult that was made, insulated in the downtrodden by branding them ‘untouchables’ have to be blasted out. The author summarises, “Phule concentrated from education for the most oppressed groups of untouchables and women to organizing the masses of middle and low caste non-Brahmins for a fundamental attack on Brahminic Hinduism.”

Phule’s interests were directed to the aspects of worldly life and ritual. The basic program was to do one’s own religious ceremonies, in particular marriage, without the help of the Brahmin priest. The movement argued for simple and less expensive marriages, against child marriage, for widow marriage and inter caste marriage. The programs focused upon the ritual position of Brahmins in marriage and other ceremonies and urged that every person could and should learn to perform his ceremonies and handle his social relations in a rational manner.

Gail says, “because of its mass, Marathi-speaking base, the organization did not penetrate easily into other linguistic areas. Yet it had its correlates and connections, the most important of which is Periyar’s Self- Respect movement in Tamil Nadu, which began in the late 1920s to duplicate the Samaj’s programme of marriages without Brahmin priest and was oriented around a rational, secularistic approach stressing a ‘Dravidian’ theory of anti- Aryan unity.”

In research, the parallel of progressive practices held in Maharashtra and Tamil Nadu have to be termed as replication and not duplication. In fact Periyar mention anything on his familiarity of Phule’s movement. During his tour to Maharashtra in 1970, he visited Pune and came in contact with the followers of Phule. The parallel of the two revolutionaries has to be reckoned as ‘Greatmen think alike.’ But in this parallel the two acted vigorously too.

Gail concludes the real cause of the movements’ dissolution in Maharashtra was the growing strength of nationalist sentiment among young non – Brahmins from about 1925 onwards and the fact that alliance with Gandhians and socialists within Congress offered an opportunity to offset Maharashtrian Brahmin strength.

The volume has to be prescribed as the text for the history students of higher education and no doubt it possesses its worthy as reference material for the research scholars pursuing the study of social revolution of the sub-continent.