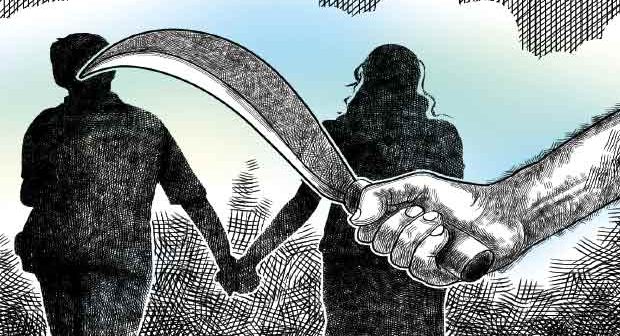 In Bansara village of Uttar Pradesh, a girl (upper caste) and a boy (lower caste) who were adults fell in love and they left the village with the help of a friend of that boy on 26th March 1991. After severe searching operations the three persons were brought back and presented before the Khap panchayat along with their family members. Their hands and legs were tied and they were hung upside down for 24 hours and at last as per Khap panchayat the family members were forced to pull down the rope. Thereby, the lives of the couple, hopeful of leading a happy family came to an end. All these incidents happened in the presence of the entire villagers. The dead bodies were cremated and sanction was imposed by the Khap panchayat that no one should leave the village without the knowledge of the panchayat.
A brave person left the village and informed the police about the incident. Police rushed to the cremation ground and collected the half burnt flesh and bones of the three innocents. FIR was filed against 54 villagers. The trial commenced in 1993. Out of 20 prosecution witnesses 18 turned hostile. The verdict was given in 1998. 8 accused were sentenced to death and a few were imprisoned. On appeal, the High court confirmed the occurrence of the crime and converted the death sentence into lifetime imprisonment. On further appeal the Supreme court delivered its directives under Article 136 of the Indian Constitution which have to prevent the occurrence of the so called Honour killing in future.