Bringing out Black Money: Treatment Worse than the Disease 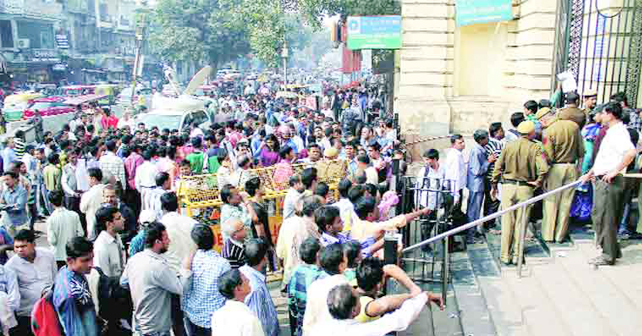 “Before commencing the mega exercise of the current demonetization the Government must have thought thoroughly to offset the hardships, undergone by the major section of the population who have not associated themselves in building up the black economy””

The terming of the current socio-economic scenario ‘Operation Success – Patient Dead’ is incorrect; the operation itself is ill – targeted by the means of which the recovery chance of the patient becomes nill

The National Democratic Alliance (NDA) government assumed office at the Centre two and half years back as the consequence of rhetoric poll promises, scripted in the election manifesto  released after much delay, just a  few days prior to the commencement of the first schedule of the polling in certain States. The pre poll – Modi’s popular rhetoric of ‘Minimum Government – Maximum Governance’ exposed the diplomatically schemed poll manifesto. Another promise of Modi as prime ministerial candidate of BJP, was the promise to bring back the black money, stashed in foreign banks and in offshore accounts. It was coupled with the gimmick of making payment of Rs 15,000/- for every citizen of the country out of the black money, to be brought back after assuming the office. This election promise was at its climax of Modi’s rhetoric.

People gave the mandate  more than enough for absolute majority to BJP. After assuming the office, in the first cabinet meeting itself, a decision was taken to constitute a special investigation team (SIT), headed by a retired Supreme Court judge to unearth black money. The main task assigned to the SIT was to bring back Indian black money deposited abroad. The endeavours on this exercise did not bring tangible results due to their policy  – hurdles in the disclosure of black money by the respective foreign banks. The list of the  Indians handed over, who had deposited money abroad was not revealed by the Government despite the direction by the Supreme Court of India. Having faced futile results in their attempts, as an onshore move, BJP Government announced the Income Disclosure Scheme (IDS) and the scheme was kept open for four months from June 1 to September 30, 2016. When the period was over, the Union Finance Minister claimed that Rs 65,000 crores had been unearthed as unaccounted income and assets. The quantum of the claim did not match with the initial expectation of the Government. However the Government declared the exercise as a big success.

Then came, the sudden announcement on November 8, of the demonetization  of Rs 1000 and Rs 500 currency notes issued by the Reserve Bank of India.  The announcement made and the series of follow up measures over the issue of demonetization under the guise of bringing out the black money aroused a lot many hardships to the common man and the middle class which is continuing still as the harassment, inflicted by the Government.

The difference between the earlier demonetizations and the current one :

During those periods the value of currency notes was comparatively higher than that of today. The high value notes were not in popular use by common man since the salary was less than the high value denominated currency notes. Rs 10,000/- currency note itself was a big money when  clerks ordinarily earned Rs 200 – 300 and most officers earned between Rs 500 – 1500 per month. Hence common man and middle class people were not affected at all during the previous demonetization exercises.

Whereas at present, due to the price rise in the economy, engineered by the globalisation of indigenous economy, even common public have been transacting with the high value currency notes of Rs 500 and Rs 1000.  These denominations have been demonetized. High denomination currency notes account for 86 percent of the 1,64,000 crore rupees of currency circulation. Hence the inconvenience and heavy odds in the usage of the hard earned money has become an unexpected shock to the public, small traders and business men. This is paralyzing the country’s economy. Globalisation exercises and economic reform measures do not possess any human face but concerned about the numerical growth in the statistics like GDP. The current demonetization moves did not bother about human face and the suffering. Since the announcement of demonetization of high valued currency notes on the midnight of November 8, the lives of 33 people have been lost by standing in queues in front of bank branches for a longer time to exchange their hard earned currency notes.

Diagnosis is wrong: The BJP Government says that the very purpose of demonetization of high value currency note is to cull out the black money which is in circulation in the country. This superfluous announcement will not be sufficient. Besides it is presumed that the high value currency notes have been counterfeited by the terrorist organisations both at the territorial borders and the emerged organisations intra territory.

The relativity of the share of the component of black money will expose the ill targeted move of the Modi’s Government.

The Treatment is also not proper

Before commencing the mega exercise of the current demonetization, the Government must have thought thoroughly to offset the hardships, undergone by the major section of the population who have not associated themselves in building up the black economy. The Government has announced that the demonetization move was discussed for about 6 months prior to November 2016. If it is so then it has to be presumed, the discussion and preplanning were not properly carried out and hence ineffective. Without reckoning the quantum of possession and use of the prospective demonetised currency notes of Rs 500 and Rs 1000 by the public, the Government has announced the move. Had they forecast it, printing of fresh series of currency notes might   have commenced much earlier and hardships of the public could have been averted. After the announcement of demonetization exercise, the frequent changes in the modalities for exchange of demonetized currency notes at the counter and depositing them in bank accounts caused utter confusion both to the public and the bankers. The banks have to bear the wrath of the public for the move, announced by the government.

Instead of targeting the main black money holders, making torture and hardship on the people who are all not associated with the black money will not bring any desired result. The currency notes exchanged and deposited in banks are not the real chunk of black money of the country.

Again, the series of announcements made by the government on the demonetisation exercises must have the concurrence of Reserve Bank of India. The legal validity of such announcements has been challenged in the Supreme Court by the prominent person in the saffron circle itself.

Prof. Arun Kumar: The misnomer is that black economy means cash. That is where the understanding of Modi is lacking. He thought that if he demobilizes the cash the black economy will collapse.

But that sounds more like a self-serving political ideology….

The political ideology is that I will be the hero of the poor, that I have eliminated the black economy that was affecting the poor. What he might do if that Rs 2 lakh crore doesn’t come back is to say I am giving 10 crore families Rs 20,000 each. These rich people had stolen this amount, so I have taken it back from them and distributed it to the poor. But it can fall flat for the following reason: while they may get Rs 20,000 one shot, if they lose their employment, they will lose far more over the year.

So as you are saying its very basic genetic structural reforms and which means gradualism, because reforms can’t come without gradualism. Like Chandrashekhar had to mortgage gold as that was a crisis situation. Even to some extent wheat control orders of Indira Gandhi in 1972 were passed during shortage times.

But the point is that those (measures) were affecting where the crisis was. This is affecting everything.

So it is a billion dollar political blunder.

The trading community will desert him as far as I can tell, because traders are very upset. Farmers are upset, workers are upset.

What they will do is to restore money supply to Delhi, Mumbai, Kolkata and Chennai so that the national press says the queues are dwindling. But there will be little money in villages. They have to walk long distances to get to the bank for money and often return empty handed. And there is little money in Tier-2 and Tier-3 towns.
Excerpts from the interview to ‘India Legal’

Dr.Manmohan Singh: ‘50-days’ was like a torture that could have a disastrous effect on the poor and the deprived; the implementation of the demonetization, a case of organised loot and legalised plunder. The exercise as a monumental disaster and the decision could lead to the GDP declining by two percentage points. This is an underestimate and not an overestimate.

The ordinary people have suffered as a result of this imposition on the country overnight by the PM.

I am reminded of John Keynes, who once said ‘In the long run, we are all dead’.

It is for the government to reflect on what we have said in Parliament. It is not for me to say what they should do, the government must take action.

Can the PM quote any country he may think of where people have deposited their money in the bank but they are not allowed to withdraw their money? This is enough to condemn what has been done in the name of greater good of the people.

It is no good that every day the banking system comes with modification of the rules, the conditions under which people can withdraw money. That reflects very poorly on the Prime Minister’s Office, on the Finance Minister’s Office and on the Reserve Bank of India. I am very sorry that the RBI has been exposed to this sort of criticism, which, I think, is fully justified.

-Excerpts from the Speech, at the
upper house of the Parliament

Prof. Prabhat Patnaik: Let me give you an analogy. If there is a crime that happens in a particular locality, you don’t go and call all the residents of that locality to the police station to find out whose hands have bloodstains or whose eyes are bloodshot and so on. Typically, you just pursue the case and you investigate. Same with black money.

Ideally, if you have an honest tax administration which operates without interference, either to exonerate people who are not guilty or to catch people who are guilty, in that case, through sheer painstaking effort, they would be able to unearth a substantial amount of black money at any time. Important cases, if properly pursued, would actually act as a signal to others.

This is what happens in other countries, but this is not what we are doing. What we are doing is demonetising Rs 500 and Rs 1000 notes, and causing great inconvenience to people. It is going to have all kinds of impacts as far as the economy is concerned – business will come to a standstill for several days. If people move from money to commodities there will be a sudden upsurge in prices, etc. In other words, these are not things which can be easily predicted because these are not things which happen in the normal course of life. But on the other hand, to go through all this and inconvenience people for a chimera – that this will  unearth black money – is to my mind really inane.

Excerpts from the interview to ‘The Wire’