Campaign on Eradication of Superstition 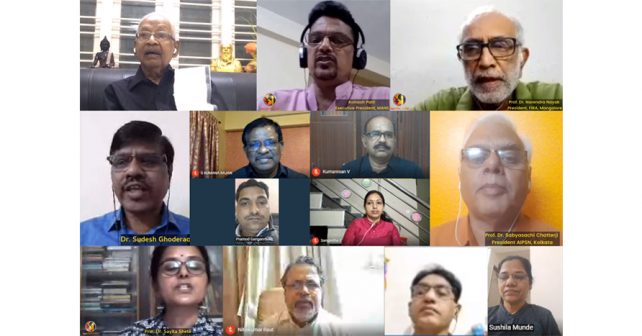 Maharashtra Andhashraddha Nirmulan Samiti (MANS) founded by Dr. Narendra Dabholkar, renowned rationalist and the architect of the Bill on Eradication of Superstition in Maharashtra organised a month long campaign on Eradication of Superstition that commenced on 21st August, 2020. The campaign was planned to conclude on September 21st coinciding with the superstition, propagated by the vested interests, of the Vinayaka idol drinking milk 25 years back and the counter propaganda made by rationalists

The planned agenda of propagating the false belief of idol drinking milk was blasted out with due scientific explanation. The superstitious belief and practice was projected as if the idol of deity, Vinayaka drank milk through the divine power. Any good thing will not proliferate that fast. The practice of superstition was meticulously planned throughout the country and the milk vendors utilized the opportunity to hike the price of milk by creating a deliberate additional demand for milk over and above the actual.

At last, the short lived-belief and the practice was blasted out through rationalist propaganda and the people were made to understand no divine power had caused such effect. The religious fundamentalists, unable to sell their commodity of superstition, wound up the business and such practice was not continued afterwards. However, the success of the rationalist propaganda against the idol Vinayaka drinking milk is being remembered every year to gain momentum for the eradication of other superstitions in society.

Excerpts from the speech of Dr. K. Veeramani:

The contributions and sacrifices made by Dr. Narendra Dabholkar for the cause of eradication of superstition is remarkable and must be emulated by the fraternal rationalist organisations in the sub-continent.

In Tamil Nadu, in most of the propaganda meetings convened by Dravidar Kazhagam as well as The Rationalists’ Forum, it has been integral of the proceedings to include the programme, ‘Mantra? or Tantra?’ (Sermon? or Trick?). The programme would expose the common superstitious beliefs and practices and the back ground behind them. There is nothing like extraordinary power associated with it but only practical tricks are projected as so called,  super practices. The programmes are being well received by the audience ranging from children to the very aged. Wherever suitable, if any scientific details associated with the practice that would also be explained. 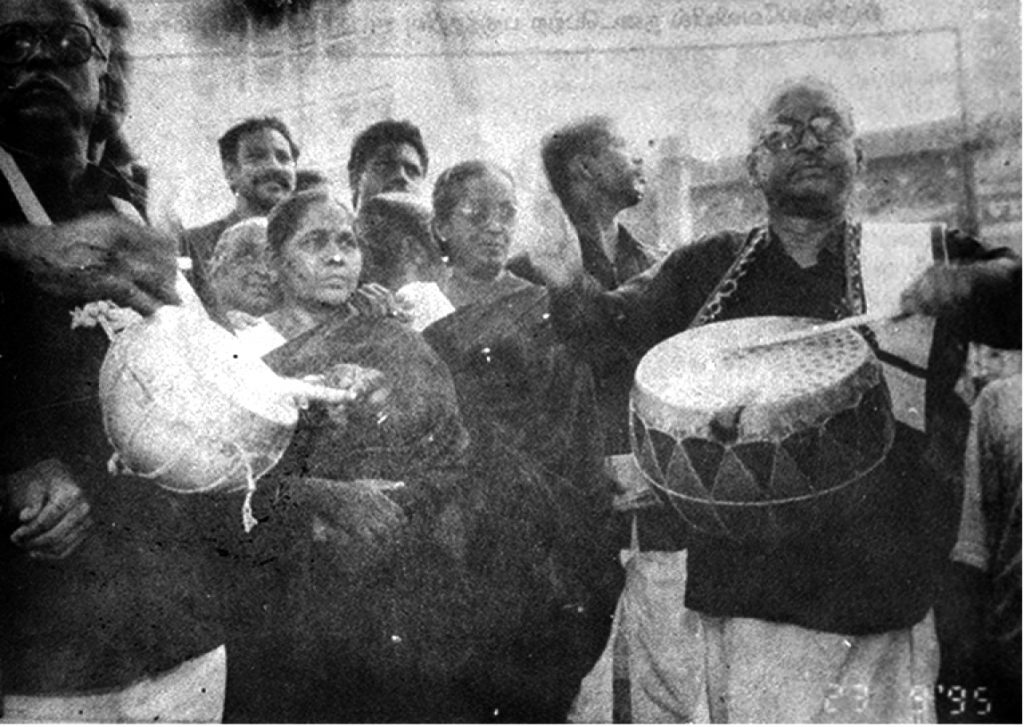 Asiriyar Dr.K.Veeramani drumbeat at Anna Salai, Chennai announcing a Cash Award of Rs One lakh to anyone who proves the myth of ‘Vinayaka idol drinks milk’ – 25th September 1995

25 years back on the same day (21st September 1995), a blind belief coupled with ‘divine’ power was deliberately propagated among the gullible devotees. What was propagated? ‘Vinayaka idol drinks milk!’ Many of the devotees immersed their little idol of Vinayaka in milk, kept in the vessel. They noticed that the level of milk in the vessel came down little after the idol was immersed. The devotees wondered that the idol had drunk milk. They were not aware of the science associated with. The idol made of clay would naturally absorb more milk. All these observations made the devotees to believe that the incident took place due to divine power.

The Vinayaka idol that drank milk and its propaganda countrywide had begun as counter to one massive celebration. At the initiative of social justice stalwart Kanshi Ram, founder of Bahujan Samaj Party during its rule in Uttar Pradesh with Mayawati as Chief Minister celebrated ‘The Periyar Mela’ in Lucknow on 17-18, September 1995. Many social justice stalwarts from various States including Tamil Nadu participated in ‘The Periyar Mela’. The Mela was a grand success. In order to divert the attention from the popularity of the Periyar Mela, the religious fundamentalists and god-men, meticulously planned for ‘Vinayaka idol drinks milk’ campaign and gave wide publicity.  What the detractors planned and executed could not sustain. Their move was defeated by the various rationalist organisations in the country through hectic propaganda. On behalf of Dravidar Kazhagam, I under took the propaganda in Anna Salai of Chennai city on 23rd September 1995, drumbeating and announcing a Cash Award of Rs. One lakh to prove that idol drinking milk.

No one came forward. No one could come to prove – reason being the meticulous planner were aware of the actual fact that it was false and the gullible devotees were only mere believers; they could not proceed further beyond that; in fact that ignorance is the capital for those who are gainful in propagating superstition in the society.

Yet another move mooted by the religious fundamentalists was exposed in the beginning itself. In Chennai -Theagaraya Nagar, the main area of the city, one morning there was an explosion. As a result a ‘Vinayaka idol’ emerged which was propagated as if it had come out on its own as ‘suyambu’. People started to worship the idol and a hundial (dumb box) was displayed there. The devotees started to put money in the hundial as sacred contribution for the construction of the temple. This incident was held in 1970 when Periyar was alive. The cadres of Dravidar Kazhagam lodged a complaint with the law and order enforcing authority. At that time, the rule of DMK was held under the chief minister, Kalaignar M. Karunanidhi, a rationalist who was groomed at the gurukulam of Erode (Periyar’s Kudi Arasu magazine office). The CM instructed for investigation. After conducting thorough investigation, the fact came out. A police constable at the instigation of the local MLA who was highly religious, implanted the idol of Vinayaka with some explosive, set to burst after sometime. The police constable had accepted that he had purchased the idol and implanted it. Action was initiated against him. The money collected was seized and reckoned in Hindu Religious and Charitable Endowment Fund. The move of constructing Vinayaka temple through dubious deeds was thwarted by the black shirt cadres of Periyar Movement.

As rationalists, we are proud of carrying out the duty as enunciated in the Indian Constitution. Article 51 A (h) says,

“It shall be the duty of every citizen of India to develop scientific temper, humanism and the spirit of enquiry and reform”.

Every citizen of the country has to develop scientific temper and as rationalist we are sincerely carrying out this fundamental duty through eradication of superstition. In that respect, we are dutiful citizens of the country.

Humanity has progressed well through the development of science and technology. Prior to 1870s the average life span of humans was 20-30 years. Then it increased to 50 years till 1930s. Later it endured at 60 years and since 1955 onwards it continues to be at 70 years. It is likely to increase to 80 years. All these developments happened due to the development of science and technology. If scientific temper in humans is coupled with, much more progress would occur. Eradication of superstition is one such move towards the prospective prosperity.

Progressive moves are retarded by the deeds of god-men. Many educated persons go behind such god-men. What was studied as science in educational institutions, are not being not practiised in their personal life. The miracle of bringing ‘gold chain’ by Satya Sai Baba was challenged by renowned rationalist, educationist and former vice chancellor, H. Narasimiah. The Sai Baba was unable to face the challenge.

Nowadays the responsibility of rationalists has mounted up. The saffron forces are trying to convert mythology as history. Even in higher educational institutions, pseudoscience like astrology is being taught as science subject.

‘The world has to be conquered not by arms but by ideas!’

The world should not be won by weapons but by intellectual visionary thought.

Spirit of Enquiry must get imbibed in everyone. Scientific temper has to be developed in the minds of the people. Reformative approach is required; overall humanism has to be nurtured. All these changes can be brought only by rationalists. It is not an easy affair; it is like swimming against the current. Rationalists have to carry out the tough tasks. Let us continue the mission of eradication of superstition to make humanity to move further with civilized progress.” Asiriyar Dr. K. Veeramani summarized as above.