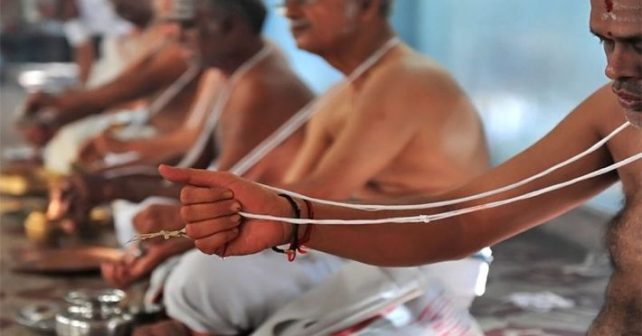 The Brahmins induce below normal thinking by advocating absurdities. Their claims rest on the stories/fables told in their old books, Ramayana, Mahabharata or various Puranas. Some such claims are:

a) Aeroplane/flying machines in the Ramayana period

c) Existence of television (claim through a story in Mahabharata war)

* about cow dung, its numerous uses,

These claims are absurd and imaginary. By resorting to such claims they impose mental backwardness among the masses so that they should not look forward towards the modern science and technology. That they should look towards modern technology with suspicion and remain in the past mindset as much as possible. This they do to prove and display to the masses that they were the advanced people and today’s scientific progress is based on their past achievements. The western science and technology is based on their inventions in the past. By these claims they fool the masses that they are and they were the intelligent people.

Here are some of my experiences regarding abnormality in behaviour of different caste people. Starting from my early days, about 10-14 years of age I was seeing how Mahars (now Buddhists) were treated by my caste people. They were not allowed to enter the foreground (Angan) of the house if it was littered with water with cow dung, (called Sada in village Marathi) in a way purified by sprinkling of that mixture. The Mahar or Mang were the two untouchable castes in the village in the eyes of Kunbis, Dhangars.

I) I was witness to the incident cited herein: In the Kartik month (October-November) the Dindis were taken out singing of Bhajans, Abhangas around the village and Artis were sung at the Maroti-hanuman temple. The Dindis were taken to the river bank for puja. After it returned it was taken around the gallis (streets) of the village. On one such occasion a Mahar’s hand touched the Tulasi plant which was planted in the elevated platform made of mud/soil, called Vrundavan. He did not touch it intentionally. But, the owner of the house, a Kunbi, thrashed the person so cruelly that he was bleeding profusely. I was shocked and was full of anger for this act. I could not do anything because the elderly person was my distant uncle.

Here the Tulsi plant was valued more than the human because of the caste system an abnormality induced by caste system.

II) A Patwari Brahman by caste, and a government servant used to come to our village for land revenue collection. His surname was Pande. He used to stay in a well-to-do Kunbi’s (Patil) house. But, he was not eating food or drinking water from Kunbi’s house. As there was no drinking water well in the village everybody had to fetch water from the nearby river, about half a kilometre from the village. He too, was fetching water from the river because he considered water touched by Kunbi is polluted and unworthy for the use by a Bramhan. He was, thus, treating Kunbis; so called high caste in the village as untouchable. He was cooking himself but was taking Jowar or wheat flour, Dal, Ghee from the Kunbi.

iii.  A Brahman Friend: In the same person’s house I took my Brahman friend to my village as we were friends and roommates in a hostel in college days. I introduced him to my cousin. By knowing his name, he took me to aside and said, ‘your friend seems to be a Brahman.’ I said, ‘yes.’ He asked me, ‘will he take meal from us as he is a Brahman?’ I said ‘yes.’ He was the same person in whose house a Brahman Patwari used to stay and was not taking water or meal from his home. He was remembering the behaviour of that Brahman and so relating it now. He was calling me ‘Tu’ but using respectful, ‘Tumhi-Aap’ words for my friend. He was aged about 50 years and we were about 25 years. I remember here the diktat of Manu who said, ‘100 year old Shudra is equal to 10 year old Brahman, and Brahman should not take food from Shudra. My Brahman friend was liberal in behaviour than a Brahman Patwari. (Land record keeper)

In a book ‘Dynamic Brahmin’ by B.K. Nair, the abnormality of Brahmin is enumerated by him in the following ways-

* Hysterical: When confronted with a radical political ideology such as communism…. they are apt to be not only neurotic but exceptionally hysterical (p.205)

* Maladjustment and abnormality because of bio-psychological potentialities.

* By the constitution of caste the Brahmin not only limited his own mental horizon but also created a mental shackle of not being able to acquire pure knowledge in a larger universe of action. (p. 198)

* Artificial division in to castes p.190

* Thinking that sanskaras are given in the womb

In his ethnocentrism and efforts to carry and spread his culture against heavy odds he has turned out to be an impatient, aggressive, abnormal and neurotic type. And will be so till he completely succeeds in social degradation of the masses (p. 204)

“Studies have demonstrated that large number of children in urban and rural slums, including pre-school children; lack the stimulus necessary for proper development in their intelligence. Even when there is no organic impairment, prolonged neglect and a lack of stimulus and opportunity for learning can result in the failure of young minds to develop. (Report 1963, p. 286)” (p. 525 of the book)

Comment: In India large number of people of lower castes and Dalits, Adivasis reside. So, the impact is not only on the children but on the entire population residing here. And they are there for generations. More than 90 per cent population residing in rural India and urban slums belong to lower castes; mostly Dalits and Adivasis.

“In fact three fourths of the nation’s mental retardants come from homes that are socially, economically and culturally are disadvantaged”. (p. 518)

Comment: This can be applied, both to the deprived and those who deprive; because both are isolated from each other. There is no social, cultural intercourse between the two and therefore both lack normal human attitude. Both lack understanding of each other. In that context the deprivation is on both the sides. This is in a way socio-cultural deprivation.

Even when the economic strata are same the caste psyche deprives them because of isolationist attitude.

There is somewhat inbuilt fear or terror among the lower castes. When in Nagpur I was writing articles against Brahmanism or Brahmins in a Marathi weekly, ‘Abhijat’ which was edited by Prof. Wadaskar. My grandmother in the village only came to know through somebody that I was writing against Brahmins. She warned me, “Dada, Don’t write against Brahmins, they will kill you”. I did not obey her. She was worried.

But, the editor of that weekly was attacked by a RSS youth in 1970 near college premises because an article was published in that weekly against Golwalkar calling him a sinner against Bahujans. He was saved by Dalit and OBC students of the college. There were huge protest morchas in Nagpur by the students, youth and progressive people. A RSS daily’s building was attacked. This was to teach them a lesson that we were not afraid and will attack them if we are attacked.