My dear protectors of castes and caste enthusiasts – through my editorial in the ‘Kudi Arasu’ issue of 16.10.1930, I had made it clear that the castes classified long ago into four grades later multiplied into 4000 castes because of one caste mingling again and again with another caste.  Quoting from the caste related evidences of Brahmins, we had also specified that all such multiplied castes are called the ‘panchamas’.  And yet some of our people who call themselves ‘velalars’ (agriculturists) assume identity as ‘Sarsudhras’, though they agree with the four grade classification as Brahmins, kshatriyas, vysyas and sudras.

They claim that this order of castes existed in Tamil Nadu even before the arrival of the Aryans.  They proclaim themselves as the fourth grade people called ‘Vellalars’.  They argue that several other castes are formed to serve them and be subservient like slaves to all the four grades.  They call those subservient caste people as ‘Pallu-Parai eighteen castes’ (peasants or tenant farmers who work on the lands owned by others). They satisfy themselves by this new arrangement.  Irrespective of the truth about these two sects, either as per the North Indian language or the South Indian language, atleast it is certain that the ‘Vellalars’ admit that they belong to the fourth grade.

The people who belong to 18 castes according to the Vellalars include general traders, salt sellers, oil merchants, carpenters, washermen, potters, blacksmiths, carpenters, barbers, flower vendors etc; – These types can be found specified in standard Lexicons.

A research work called ‘Abidana Kosam’ says people of these 18 castes arrived as servants from Andhra Pradesh, 18 different names have been given to them by this particular research volume.  Thus, there are variations in the sub-divisions of castes.

Besides all these complex classifications, it is said that even among vellalars there are various groups and sub-sects.  Among the ‘Sudhras’, the vellalars are prominent, followed by Mudaliars, Chettiars etc; Thus, an intricate caste system exists in our society.

In the case of Brahmins, disparity and inequality has been cleverly avoided long ago.  There have been clashes between kshatriyas and vysyas.

The disputes between these two grades seem to have no end.  They indulge in unwarranted quarrels over their superiority and status.  They degrade each other and create scenes.  We are able to witness their clashes in many places today. Common public views their fights in disgust and disapproval.

These two groups come out with several evidences to prove their superiority.  They compete with each other to establish that one group is superior to the other.  But all their evidences ultimately prove that they are both inferior to Brahmins.  All the supporting arguments of kshatriya’s and vysyas to establish each other’s superiority end up in confirming that Brahmins reign supreme.  The clashes of both the grades turn out to be totally futile. 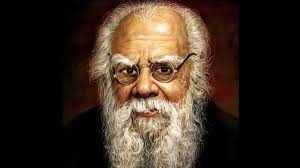 At this juncture, as per the present situation, except Brahmins all others are considered low-caste people whom a Brahmin should not even touch, allow to dine with or permit to exercise certain common rights.  People other than Brahmins seem to be condemned to exist as slaves of Brahmins.  The low-caste non brahmins have to live with stigma of illegitimate individuals, obnoxiously cross-bred.  The existing graded inequality in our caste system reveals only this unpalatable truth which no one would deny.

The present caste system has kept us spellbound.  Our arguments fall on deaf ears.  Castes have sprung from religions and religions have sprung from vedic scriptures and the basic ancient works called ‘dharma’.  We are unable to raise objections against all those unacceptable rubbish.  We are forced to quietly accept and endure our degradation.  Our deplorable condition today compels us to live with the stigma and we have obviously no option.

The fitness and rights provided for people other than Brahmins are at such a low ebb that no one with even a little bit of self respect and dignity would dare to reveal his caste or even to dream of it.  Habitual criminals are labeled by the Government as “criminal tribe”. The treatment meted out to such criminals are similar to the ill-treatment meted out to the fourth grade people by Brahmins.  The ‘sudhras’ belong to the fourth grade.  Brahmins have provided them with the rights which are almost similar to the rights granted by the Government to the “Criminal tribe”.

To quote the laws found in the so called Dharma Shastras –

This implies that one should stay away at all times from a bathed horse, a rogue elephant, a lusty bull and a ‘Sudhra’.

Another code of conduct says –

Which means women and Sudhras should never be involved in penance, chanting prayers, renunciation, worship of Gods and pilgrimages,

This implied that a ‘Sudhra’ should not study Sanskrit.

This means that a ‘Sudhra’must not read shastras, must not listen to Vedas and that he must not take his bath, chant mantras are indulge in penance before sunrise.

These lines mean that Sudhras must not read historical mythologies but can listen to them when they are read by brahmins.

This one from Bhagwad Gita implies Krishna saying that

“All the four varnas are created by me.  The duty of a ‘Sudhra’is to obey and serve brahmins.”

Thousands of instances could be specified like all the above cited quotes.  The Vedas, dharma shastras and divine voices have told us all these.

Since we are under a governance which is not bound to adhere to the Hindu dharma we are relieved greatly.  Some of us atleast are spared adherence to all these codes of conduct.  But if everyone clings to his religion and caste crazily what would be our condition tomorrow?  I urge upon you all to think over this issue.  If ‘Swarajya’ and ‘Varnashrama’ dawns, what would happen to the guardians and protectors of castes?  Think deeply even about that.We wish to caution that caste discrimination would not vanish as long as there is caste divisions among the Hindus.

We find many nationalists around us today.  If they are really willing to attain total autonomy and if they are truly craving for India’s freedom, they must see that caste discriminations are abolished during British rule itself.  Only that would be a sensible action.  If they wait till the British quit, it would be suicidal.

Among 1000 Hindus 999 Hindus do not care about abolishing caste discrimination.  Everyone wants to be an upper caste person and loves to have people of other castes under their heels.  If such people form the new Government, atrocities would be on the rise and caste menace would continue to be an unmitigated suffering.

If Indians had existed without the evil of castes, without such disparities and inequalities, we might not have become slaves of alien rulers.  Expecting freedom from the British without eradicating castes and religions does not make any sense at all.

We must get rid of our stigma and end mutual recriminations.  We must be united before achieving freedom.  We cannot say to the British – “We can solve our problems.  You may quit now!” – That would make our condition worse.  Hence, I urge upon you all to eradicate caste discriminations.  Try to annihilate, religions too, which are the roots of castes.