‘Caste: The Lies That Divide Us’ review: Casting a Long shadow 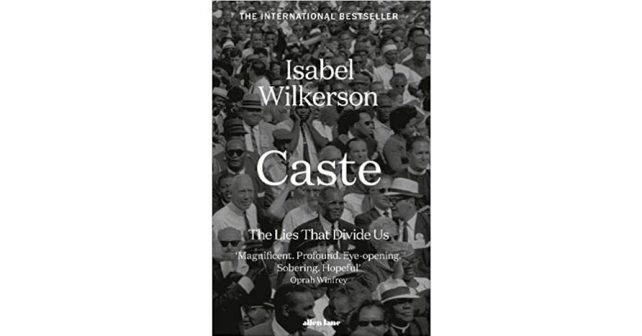 With devastating evidence, some from her own life, Isabel Wilkerson links the race-based caste pyramid of America to two other powerful systems, that of Nazi Germany and India. The long hand of caste touches every aspect of Indian life, politics, culture, society, history. Suraj Yengde begins his recent book, Caste Matters, by saying “I am forced to live in the world as though I am secondary, and the Brahmin and his universality are primary.” Two other writers Sujatha Gidla (Ants among Elephants) and Yashica Dutt (Coming out as Dalit) have recalled the inhumanity endured by the dispossessed, the malady of caste and “the invisible arm that turns the gears in nearly every system in our country.” Now, an American journalist and writer Isabel Wilkerson seeks to understand the “race-based caste pyramid” in her own country by linking it to two other caste systems, that of Nazi Germany and India.

In Caste, a painful exploration of what human beings are capable of doing to each other, Wilkerson writes that “each version relied on stigmatizing those deemed inferior to justify the dehumanization necessary to keep the lowest-ranked people at the bottom.” A caste system is an artificial construction, she points out. It is “a fixed and embedded ranking of human value that sets the presumed supremacy of one group against the presumed inferiority of other groups.”

With devastating anecdotal evidence, some from her own life, years of research, reading the works of Gunnar Myrdal, Allison Davis, B.R. Ambedkar et al, and interviews across continents, Wilkerson reaches the conclusion that the hierarchy of caste is about power — which groups have it and which do not. In America, she says, caste is the bones, race the skin.

In India too, caste is the powerful infrastructure that holds each group in its place. Even for those who shatter these manufactured divisions, it is never an easy transition. She quotes Ambedkar, who worked his whole life for the ‘annihilation of caste’, to argue why the divide is so well-entrenched: “Caste is a notion; it is a state of mind.” Ambedkar, who she once called the Martin Luther King of India to make him relatable to a fellow American, had written to sociologist W.E.B. Du Bois that there is a lot of “similarity between the position of untouchables in India and the position of Negroes in America.”

Caste and its ‘eight pillars’ which includes religious sanction, be it in the U.S. or India, hold everyone captive, according to Wilkerson. It forces a black woman to pretend she is not the owner of the house she lives in. It makes a Dalit scholar feel inadequate to face upper caste people. It lets people live in fear. She tells disturbing stories — of a black boy drowned in front of his father; about lynchings, and lynching postcards with photographs of the killings which were apparently a common form of communication in the turn of 20th century America; of huge inequities and other instances of everyday humiliation like being made a scapegoat for all societal ills from drugs, stagnant jobs to crime. Some of her accounts could be taken off headlines in India.

But her book is not just a chronicle of insults. The Pulitzer prize-winning journalist and writer of the highly-acclaimed The Warmth of Other Suns casts a light onto the history of caste and its consequences “to express hopes for its resolution.” Humans can break free of the hierarchy’s hold on them, she writes. But while Germany had atoned for its Nazi past — all memorials in that country are for victims not aggressors — and South Africa set up a Truth and Reconciliation Commission after the end of apartheid, Wilkerson emphasises that America has a lot to do to bridge the gap.

She writes of the visit of Martin Luther King Jr and his wife to India in 1959. The civil rights leader wanted to see the land of Mahatma Gandhi whose fight for freedom from British rule had inspired his fight for justice for his people. The oldest democracy and the largest democracy have since abolished legal discrimination and yet Dalits are “brutalized” as are African-Americans.

In an American election year, her observations on the Obama and Trump presidencies are chilling reminders of the deep prevailing chasm. When Trump won in 2016, she heard many progressives saying how could so many people (read whites) vote against their own interests? Wilkerson contends that they voted that way because it was in their interest — they wanted to maintain the caste system as it had always been.

Some may argue that linking race relations in America to Nazi atrocities and the Indian caste system is tenuous but she strongly argues her case with a powerful document that holds lessons for aggressors and their victims all over the world.