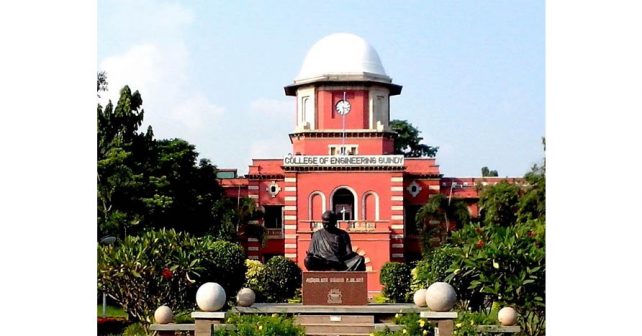 Post graduate courses M.Tech (Bio Tech) and M.Tech (Computational Biology) were being pursued by the student community with the financial aid from the Central government.  All India Council of Technical Education (AICTE) wanted the admissions for the academic year 2020-21 to be completed by December 2019.  But on 29th January 2020 Anna University announced through its website that the admissions for those courses were cancelled since the reservation guidelines stipulated by the Central government were not acceptable to the State government.  This came as a shock to the students who had already applied for admission. Anna University conveyed the news nearly a month after the last date specified by AICTE.

As per the University Grants Commission (UGC) and All India Council for Technical Education, it is mandatory for State Universities to follow the reservation policies of the State government.  Accordingly, 69 per cent reservation is compulsory in all the universities under the control of the State.  But the announcement of Anna University blames it entirely on the Government of Tamil Nadu, which is unreasonable.

Until the previous academic year, the Central government had been directly admitting students into bio-technology related P.G. courses.  Hence ignoring the 69 per cent reservation policy meant for Tamil Nadu State Universities, the Central government had implemented 49.5 per cent reservation for all the 45 seats in Anna University.  This has come to light now since educational institutions have been permitted to admit students on their own, but through the merit list based on the combined Entrance Examination by Regional Centre of Biotechnology under the control of the Central Department of Bio-Technology, from this academic year. Anna University cancelled the admission, throwing the blame intentionally on the State government of Tamil Nadu.  Obviously, the government at the Centre has violated the reservation guideline specified by UGC and AICTE, which has resulted in great confusion and ultimate mental agony of our students.

Anna University should have admitted students implementing 69 per cent reservation honouring the guidelines of AICTE.

The Chief Secretary of the Higher Education Department in Tamil Nadu had sent an order on November 18, 2019 ordering implementation of 69 per cent reservation.  But Anna Univesity had been inactive for 42 days, keeping the entire issue on the back-burner, which proves its dereliction of duty.

The last date for admissions was extended upto 11th of January 2020.  Even then Anna University maintained silence concealing its cancellation of admissions.  It did not respond to hundreds of enquires and phone calls from anxious students and their parents.  Growing impatient, when the students barged into the University to enquire, they were offered evasive replies in an irresponsible manner.

The management had reportedly told – “We can explain only to the students who personally meet us, not to a crowd.  Besides, the matter is not pertaining to thousands of seats.  It is about just 45 seats”.  As the outcome of this students’ meet with the Vice-Chancellor, Anna University cancelled admissions.

Despite the gravity of the situation, the Government of Tamil Nadu has been a silent spectator.  There is no constructive step so far.  Since the first amendment in our Constitution, well-wishers of social justice have been relentlessly striving to help all our students acquire education.  This struggle has a glorious past.  But the indifference of the Government of Tamil Nadu towards this serious issue is really baffling.

When the UGC instruction says in clear-cut terms that admission is to be made as per the respective State Reservation Policy (69% in Tamil Nadu), the Centre insists on the adherence only to the Centre Reservation Policy 49.5% as a precondition to extend the scholarships to the students and research grants to the institution; otherwise the financial assistance will not be released.  Reservation in educational institutions has to be  based on social and educational backwardness of the students. Financial assistance cannot decide the reservation policy for the admission.  It is a gross violation of the Constitutional provision.  The Centre cannot encroach on the reservation policy of State through the financial grants.

When the students who were aggrieved by the suspension of the M.Tech courses approached Madras High Court, it has been ordered by the court to commence the admission for the current academic year as per Centre Reservation Policy of 49.5 per cent.