Coarse cry for one culture, language and tax! Why not for one Caste? 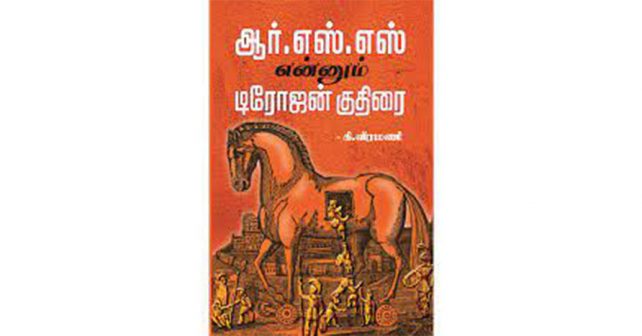 The recent volume by Dr. K. Veeramani in Tamil ‘ஆர்.எஸ்.எஸ். என்னும் டிரோஜன் குதிரை’ (RSS-Trojan Horse) on  R.S.S. is a note of caution that Tamils must be vigilant of the impending growth of the communal unit. A warning to the RSS – BJP nexus that they are under the surveillance of the southerners. In Grecian mythology, the Trojan horse was successful. But it can’t do against the Tamils who are neither the Trojans nor gullible to be conquered. Their soil is heroic and they are immune to any type of incursion. The gimmicks of RSS would yield not better, but only bitter results.

The misleading definition of Golwalkar for the term ‘Society’ is smashed at the outset. The wishy-washy interpretations of Golwalkar coterie about Hindu religion’s varuna adharma pales into insignificance before the rational argument of the author Dr. K. Veeramani. Queries that are posed by the author are like heavy blows of hammer so strong that the coterie can no longer bamboozle the public.

Masquerading as a disciplinary organization, the R.S.S. strove hard to enliven Vedic religion and to resurrect the unspoken Sanskrit at the cost of annihilating other languages. To the question, is not caste system a bane for Hinduism, Mohan Bhagwat’s answer is that R.S.S neither supports nor opposes caste system. Such an evasive response outlines their “cunning thoughts” says the author.

The author puts the higher –ups of the R.S.S in tight corner by questioning them why don’t they proclaim a rule that there shall be no more castes at all in Hindu religion. They should do this if what they repeatedly cry coarse in favour of one culture, one language and one tax. That attributing divisiveness amongst the Hindus is due to the advent of Britishers is a blunt lie.

Social Justice is a mandate in the preamble of the Indian Constitution. Mandal commission restored a life to it and V.P.Singh activated it but it is the unholy alliance of R.S.S and BJP that toppled his rule. The communal G.O was enforced by Justice Party in 1928 in Tamil Nadu but the Brahmin clique saw to it that courts decreed it as null and void. But Periyar strove hard against the orders of the court and succeeded in the First Constitutional Amendment in favour of communal representation in educational opportunities.

Under the pretext of advocating merit, the R.S.S echelons made a hue and cry against reservation policy especially in Gujarat. But in the face of heavy resistance to their opposition, the R.S.S took dichotomous stand of telling that they neither strongly oppose communal representations nor accept it.

The image of Swami Vivekananda, as drawn by the author is not of any sanctity. As a staunch supporter of caste system, he was for the growth of Hinduism at the annihilation of other religions. A cherishable secular outlook was not there in him.

Quoting Dr.Ambedkar’s statement, is there any horror more atrocious than shastraic decreeing that if a Sudra educates himself by listening and reading, his tongue must be cut off and molten lead must be poured into his ears? The author pictures the Brahminist prejudices that played havoc among the non-Brahmins.

In recalling the bitter experiences of Banwar Macvenshi, a Dalit in the R.S.S who exited from it in disgust, it is made known that R.S.S is a fortress of Brahmins. Horrible it is that Narendra Modi’s cabinet is the fascimile of the R.S.S where 32 ministers are Brahmins and about 20 are from other communities in single digits. No less is the bitterness of Ramesh Pathanke in the R.S.S. He and Mr.Badri observe that as a vote-catching technique, they give a nationalistic image to Ambedkar. To offer positions to a few from reserved sections is a game of deceit. A few dalits including the President of India are show pieces to make us believe that they are also secular in outlook. A mere reference to Jothiba Phule is a bitter pill for the Shaka members, says Pathankar. Badri assures that R.S.S continues to enforce its diktats on and is strenuously working for the BJP during elections. Its projection of Modi as Prime Minister was also with a  vested interest of garnering the vote bank of Backward Classes and Dalits. Kancha Ilaiah also confirms this in his work-’ The Shudras’.

Synoptic account from a book Shadow Armies by Dhirendra Jha shockingly reveals how far the R.S.S with its eight offshoots have so far engineered a lot of conspiracies and militancies against its dissenters and other minorities.

The book strongly refutes Golwalkar’s accusation on Bishop Caldwell for the use of Dravidam. The Hindutva bigwig is unaware of the fact that the term has been in function since the 6th century. The BJP and its lieutenants admire Tamil every now and then to enter Tamil Nadu. The author submits how far the NRI Brahmins from the USA donate huge sums to the R.S.S and its offshoots only to foment communal clashes in India to buttress the growth of Hinduism at the expense of Islam and Christianity.

Shocking truth is that with all the hullabaloo it creates, the R.S.S is not a registered organization. Thrice it was banned but still it is kicking and punching. An awareness of its danger is all the more essential to put a full stop to its proliferation. The book under review is an authentic documentation and deserves to be popularized in English versions.

It is not a mere collection of matters from here say and gossip but a reliable document from authentic sources to unmask the devilish and phantomic picture of a communal organization. The keen observation, deep study and depth of knowledge of the one who authored this book must be grasped by all who are interested to know about the questionable activities of the R.S.S. In toto, Dr. Veeramani’s closely reasoned and evenly balanced approach and argument will prove to be hard nut for cracking even by the champions of Hinduism and the celebrities of the R.S.S.