Consistent Dential of Constitutional Rights of Reservation to OBCs

Since the introduction of All India Quota in the UG/PG medical course admission, the constitutional rights of reservation have not been provided to Other Backward Classes (OBCs) in respect of the medical seats contributed by State Governments. In respect of the reservation, the State governments can decide according to the conditions of the marginalised sections viz. SCs, STs and OBCs that prevail in their respective States. The same has been confirmed by the judgment, delivered by the apex court of the country.

Claiming the rights of reservation for OBCs, all the mainstream political parties, Dravidar Kazhagam and other social organisations of Tamil Nadu besides the Tamil Nadu State Government have approached the Supreme Court which directed them to file their writ at Madras High Court. Accordingly, the writ was filed and got admitted at Chennai and notices were issued to Ministry of Health and Family Welfare and Medical Council of India. They filed their reply affidavit and expressed their readiness to provide reservation to OBCs in respect of State contributed medical seats to All India Quota. The Madras High Court decided the case and directed the formation of a committee, comprising representation from Central Government, State Government and Medical Council of India which would decide on the modalities of implementing the reservation for OBCs within a period of 3 months. When the admission for PG medical courses are already over, it was expected eagerly that OBC reservation would be provided from the current academic year onwards at least in UG medical courses. When the time limit stipulated by the Madras High Court was nearing, the aggrieved applicant approached the Supreme Court to give direction to the committee. The Central government representative had appeared before the Supreme Court and stated that it is not decided so far on the issue of reservation to OBCs in AIQ seats, contributed by the States. When the NEET results are released, it is definite that the OBCs candidates would not get reservation in the current academic year also. Delaying and deferring the decision has been the consistent course of action on the part of Central government to provide reservation for OBCs that results in the ultimate denial.

It has become a difficult task for the OBCs to avail the constitutional rights of reservation, envisaged by the founding fathers of the Constitution. The ruler’s attitude of adopting double standards stands exposed. When OBCs find it difficult to attain their rights from the day, the Constitution came into force, the present BJP headed rule, shamelessly swift enough provide 10 per cent reservation for economically weaker sections (EWS) where in the interests of upper castes are involved. No organisation demanded for reservation to EWS. No Commission was formed to enumerate the actual condition of EWS and their numerical strength. Blindly, 10 per cent reservation was provided to EWS, without bothering about its constitutional validity. From the current year onwards the reservation to EWS has come into force too. Why such approach was not adopted by the Central rulers with respect to OBC reservation. Denial of reservation to OBCs has been in force in education and employment under the control of Central government. The days are approaching fast for OBS to unite among themselves and revolt for their cause! 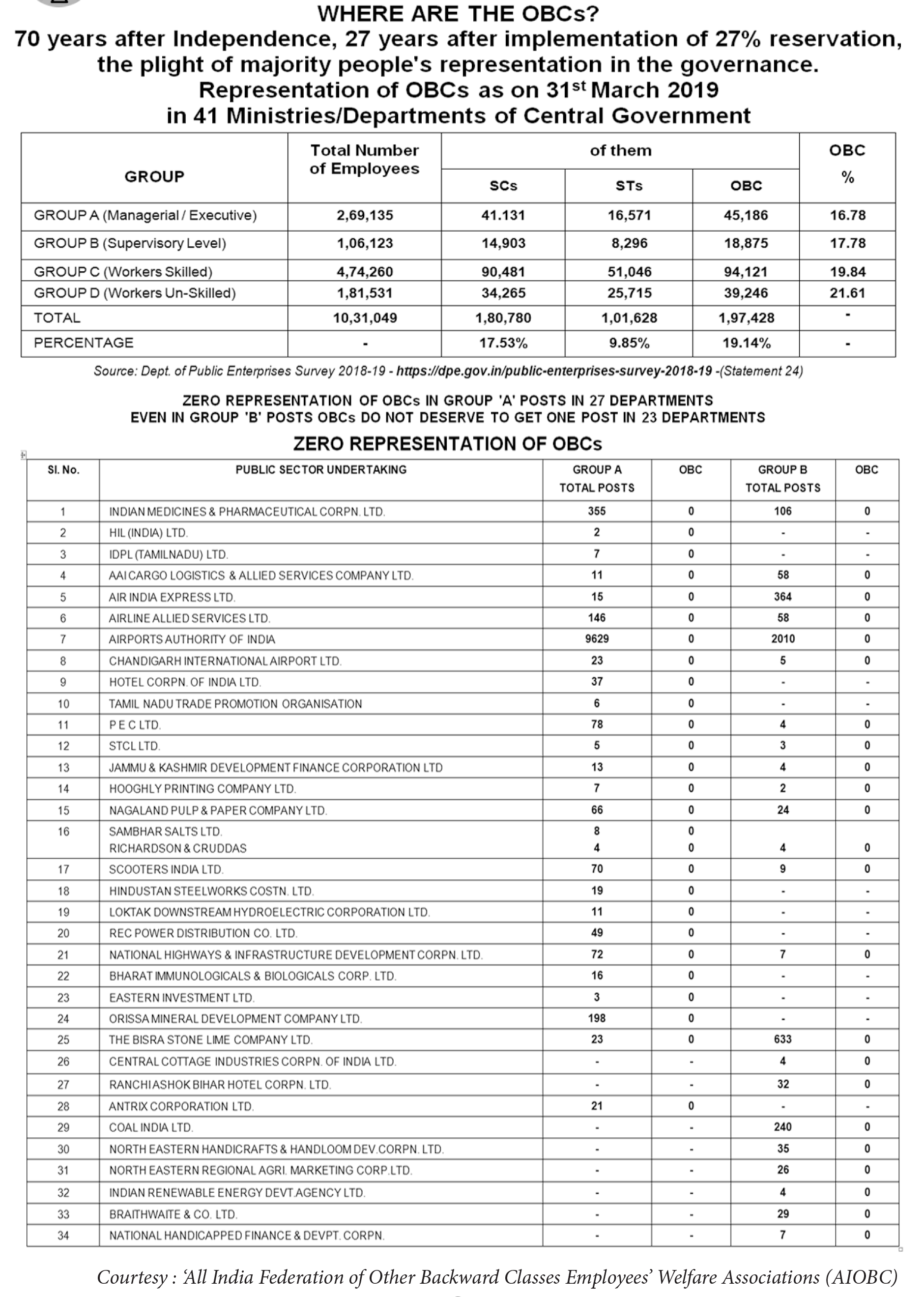