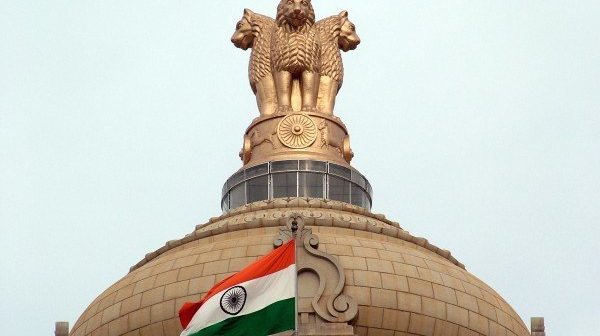 Congress Party vice president, Rahul Gandhi said in the LokSabha that this country is a Union of States, not a nation.

In this State there are many States within one big state.

The State reorganization done in1956 was based on languages. There were massive movements for this. Madras, Bombay, Bengal etc. were big states and they were separated by languages after the 1956 State reorganization,not by culture or history.
But what he said is true that there is no nation as per the Constitution. Because, the Constitution does not clearly define a nation. But RSS, and BJP opposed his statement and said that India is a nation. The national role of the RSS, BJP is not only that of a unified state, but also that of the country which has one culture, one religion, one language and hence it is one nation. Behind this, is the mindset of the RSS.
This has been outlined by ex-RSS chief M. S. Golwalkar.

Dr.Ambedkar
Dr. Ambedkar said, ‘India is unitary as well as federal according to the time and circumstances.’ Unitary governance is a type of government system in which a single power, known as the central government, controls the entire government. In fact, all the powers and administrative departments are located at the central place.Of course, according to Dr. Ambedkar, India is a unified state and a federation of states. It is not just a unified state.

The RSS wants a unitary state. Golwalkar writes in his book ‘Bunch of Thoughts’, “All tendencies seeking a separate state reject the belief in the unity of the motherland. All those tendencies have to be uprooted.

The most important and effective step in this direction is to stop the discussion on the federal structure of the Constitution of our country. It, destroys the existence of all autonomous and semi-autonomous states in India by declaring One Country, One State, and One LokSabha. Segregation, in regional, communal, linguistic or in other forms of discrimination undermine our unity. ,

(Bunch of Thoughts, M.S. Golwalkar p. 237 Second Edition 1980)
This means that the union wants a unified state. And they take it further and call it Hindu Rashtra.

Constitution and State
The Constitution says this country is a Union of States, which means that the States have limited powers.

On the other hand, this country is also a federation of states, which means that the States have a separate existence. This is true in a limited sense as well. Because, States can enact their own laws and the Central government cannot interfere in it.
But in some cases the laws of the Central government are applicable to all the people in all the States. The Constitution applies equally to all the states. In this sense, the States here are not federal, like the US. Because Americans are citizens of the state and of the country also. That is, twin citizenship. And in India, however, there is only single citizenship.

State and nation
This country has a Constitution. But the question is, is it a nation? This is a question that needs to be addressed.

Most of the Sangh people say that it is a Hindu Rashtra and many people of BJP including Modi use the word Rashtra time and again. It is Hindu Rashtra.

People of other parties do not use the word ‘nation’.

The RSS also says that it is Hindu nation. And it has been in existence since ancient times.

The RSS argues that this country has one religion, one culture, one language, and one history. The caste system is deep rooted in the concept of the Hindu nation.
The aim of the RSS is to form a Hindu nation.
Rahul Gandhi says Hindu and Hindutva are different, but he does not reject castes. He does not completely reject Hindu Rashtra.

What is ‘nation’?
The most common definition for‘nation’ is that it is a habitat of people who share the same origin, culture and language. In this context, will this country fit into the definition of a nation? Since multicultural, multilingual, multi-ethnic people constitute this country, a narrow definition is not convincing.

In such a situation also a nation can be formed, but for this the people here have to change their mindset. All the people here should think that all of us should behave with equality, compassion and brotherhood.

Is this Hindu nation?
In this country some organizations, and some political parties such as RSS and BJP are in favour of Hindu Rashtra. There are other organizations with the same ideology. They are Vishwa Hindu Parishd, Bajrang Dal, DharmSansad outfit etc.

The ideology of Hindu Rashtra is not based on brotherhood and equality.It is full of mutual hatred diversity and inequality. These people say that all the people here are Hindus but with inequality. Inspite of the condition of high and low they call it Hindu Rashtra. Secondly, they do not want inequality only between those who are called Hindus, but also between those who belong to other religions.They treat them as enemies and sow hatred towards them, which means that this type of Hindu Rashtra is not as per the definition of nation at all. In other words, it is clear that those who say that it is a Hindu nation are against the concept of true nation or against the nation. This is not the case in any other country in the world.

When does a nation become Egalitarian?
It is a thought – provoking question. Organizations, political parties, like-minded, fraternal, non-hating people who want to play or have a role here are the ones who are really nationalists.

In the past, in pre-vedic times there was no caste system, no high and low.It can be said that it was a nation which was casteless.

But it is not that we cannot bring the distant past and build a nation of brotherhood and equality. Here Buddha had created an egalitarian culture and that egalitarian system was a real nation in a way.

In the 19th century, Mahatma Phule, a social revolutionary said, “Considering caste hierarchy where there is blend of inferior and superior, each caste has a different attitude.They do not support each other. How can there be a homogeneous nation in such a fragmented society?”

Mahatma Phule says that having caste system, being high and low means that the nation does not exist.

Ambedkar made this statement while presenting the draft of the Constitution.
He said “There are castes in India. And castes are anti-national. Because they bring isolation in social life. They are also anti-nationals as they create jealousy and animosity between one caste and another caste.”

Of course, Dr. Ambedkar categorically said that caste is anti-national. That is, if there is a caste, there will be no nation.

In contrast, Hindu nationalists play a different role. They call Chaturvarnya, the caste system, a nation and aggressively advocate its perpetuation. It means they do not want true nation in this country. In fact the Hindu nation is a Brahmin nation.
Because only Brahmins think about it. Hedgewar, Savarkar, Golwalkar and today’s RSS chiefs, for instance.

So, if we want to build a true nation here, it will be a nation without caste.It will be an egalitarian nation, only when the nation is without hatred among its people.