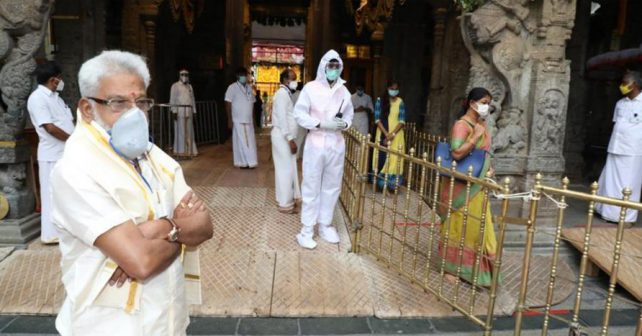 For the past more than 4 months, not only our country, the various parts of the globe have experienced severe setback in the normal human life, incurred significant human loss and faced deterioration in the respective economy. In India, the deterioration in the economy had started even prior to Corona pandemic that commenced in the mid of March and it has aggravated the pace of downfall in growth and the intensity of the setback.

The Governments both at the Centre and the States are unable to control the pace of pandemic increase on individuals and the resultant death. The graph shows an uprising curve in the testing of positivity for Corona pandemic. Pandemonium prevails in the approach adopted to control the menace. Social distancing and avoidance of congregation of individuals are the minimum measures that have to be observed by everyone. The government authority must also enforce it at any cost. Prevention is better than cure is not the alternative but the only available avenue in the enduring condition of non-discovery of any exclusive medicine for cure from Corona.

The avenues that weaken social distancing and avoidance of congregation have been locked down to the possible extent by government intervention. There may be little gap in the adherence of those prescriptions despite the violation of them are liable for the levy of penalty. There remains one area wherein the prescription measures for prevention itself is lacking; not only lacking there exists hesitation on the part of government to interfere in strict terms. The privileged areas, fostering the scope for Corona to proliferate are religious worshipping places and related festivities. No restriction was imposed for prayer by individuals in their homes. But bold measures have not been undertaken on a continuous basis by the government authorities to restrain poojas and prayers in temples, churches, mosques etc., and to avoid the congregation of devotees. While at the beginning, strict bans were enforced for public worshipping and it was relaxed subsequently. Relaxation was made despite the increasing incidence of Corona. The relaxations have intensified the pandemic attack on temple priests and a few of them had to lose their life. The very pertinent venue is Thirumala Devasthana Temple, Tirupathi. What was reaped due to intermittent relaxations by keeping the temple open, allowing the devotees to visit and performing pooja is nothing but human loss! The value of human loss cannot be measured in monetary term. The set back in the family of the deceased priests and devotees cannot be compensated by any means.

In Odisha, for conducting Puri Rath Yatra, which would warrant a sizeable congregation of devotees and priests, the judges of the apex court of the country had received threatening calls to pronounce permission for the Rath Yatra. The devotees and priests are not isolated in society. They have to mingle with others and for no fault of those others their families have to suffer. When voluntary restraints are not adhered, it is a must for the Government to enforce it. It is the very purpose of existence of State to protect its subjects.

All the more, the rule-makers should not be rule-breakers. As a country of secular polity, the activities of the rulers must be non-religious, strictly so during the Corona pandemic period, by keeping at distance the religious activities.

The Supreme Court had pronounced for the construction of the temple at Ayodhya, simultaneously charging the demolition of Babri masjid as a criminal offence to be proceeded with necessary judicial actions.

During the hours of Corona, for the foundation laying of the temple at Ayodhya, starting from Prime Minister, Governor of the State and the Chief Minister participated for which the entire government machineries were deployed. Besides the saffron leaders and priests in multitude had congregated, unmindful of the consequences of likely Corona incidence.

As cautioned, the chief of the Ayodhya temple construction trust who participated in the foundation laying ceremony and conversing with the PM and other dignitaries has been tested positive for Corona. Will it have its impact on the State dignitaries who have not isolated themselves so far? The self-isolation measures have been enforced in respect of the Union Home Minister why not so for the dignitaries who participated in the foundation laying event at Ayodhya? The PM, the Governor and the CM of U.P. are not individuals. They are the State rulers. Their life is precious and have to be protected at any cost. The rule-makers should not be the rule-breakers. Immediately, those State dignitaries have to isolate themselves; it is safe not only for them and also for others who are likely to interact with them as part of public life.

At latest, the State unit of the ruling party at the Centre, insists the State Government of Tamil Nadu to permit for ‘Vinayaka idol placement, taking them on immersion procession of the idols in waterbodies’ in multitude in public for celebration, as it happens every year. Such placement of idols would invite the devotees to assemble in large members which would defeat the control measures against Covid. More than the religious agenda associated it is politicizing the issue and reaping mileage out of it. They do not bother about the likely spread of Corona pandemic at the ‘Vinayaka’ festival. This task of banning Vinyaka celebration in public must be enforced with iron hand by the State Government taking into account the lives of the gullible devotees who would join, in case the celebration is permitted.

Let the gullible devotees do not fall into the trap, leading to the likely life loss! Let the Government remain strict to the core to restraint and in case of need to ban all the religious festivals that may lead to proliferation of Corona pandemic! Let the State remain secular as adumbrated in the Constitution in the interests and welfare of the citizens!