Cow Urine may Cause Global Warming 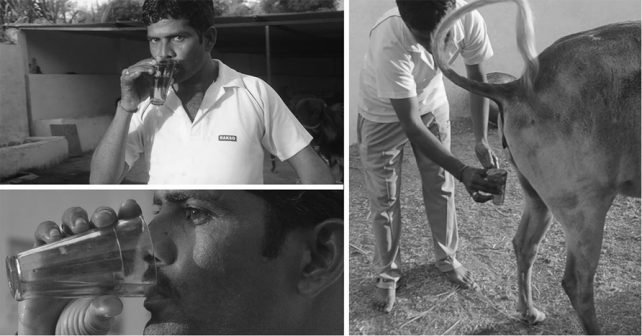 Cow urine — a minor fount of research in India for its medicinal benefits — may also contribute to global warming. The urine from the ruminant is a source of nitrous oxide emissions (N2O), a gas that is 300 times more powerful than carbon dioxide. Most times, when cow urine is used in degraded pastures, which are also seen in vast tracts of land in India, N2O emissions are tripled, says a study conducted in Colombia, Argentina, Brazil, Nicaragua, Trinidad and Tobago, and published in the latest edition of the peer-reviewed Scientific Reports.

That cattle and livestock are a significant source of methane, a greenhouse gas, and therefore a contributor to global warming, is well-known. However, the role of cow urine is less understood. For the study, researchers collected urine from cattle and spilled 500 millilitre samples on paired cattle fields classified as degraded or healthy, which was determined by vegetation coverage. In six of the seven test sites, degraded pastures emitted significantly more N2O — sometimes up to three times as much. The study was conducted by the International Centre for Tropical Agriculture (CIAT), Columbia.

Dung and urine are commonly mixed together for manure in Indian fields. Since, India also hosts the world’s largest livestock population, as well as significant tracts of degraded land, the findings may have a bearing on nitrogen emissions from Indian fields. A 2012 satellite study by the Indian Space Research Organisation (ISRO) said that about 30 per cent of India’s geographical area (or about 96.4 million hectares) is degraded.

“This study adds to the case for land restoration. Degraded pastures not only affect food security and the livelihood of farmers today, but affect the livelihood of future farmers because they emit more gases that cause global warming,” said Ngonidzashe Chirinda, a CIAT researcher and the study’s lead author said in a statement.

Degraded grasslands emitted more N2O than healthy pastures because the vegetation in the latter took up some of the reactive nitrogen compounds and only the leftovers were emitted.

According to an expert in India, India had estimates for dung and urine production per cow or buffalo or other livestock animals as well as their overall estimates for their populations as per 2012 livestock census, but the exact contribution of cow urine to the total nitrous oxide emission from India are not estimated precisely.

“In that sense, studies like these are probably needed and useful for Indian livestock emission studies. We have very limited research on this,” said N. Raghuram, Department of Biotechnology, Indraprastha University, and Chairman, International Nitrogen Initiative.

Source – ‘The Hindu’(English) at Coimbatore

I would ask every one of you, what do you know about this Varnashrama? Where are the four castes today in this country? Answer me; I do not see the four castes. Just as our Bengali proverb has it, “A headache without a head”, so you want to make this Varnashrama here. There are not four castes here. I see only the Brahmin and the Shudra. If there are the Kshatriyas and the Vasihyas, where are they and why do not you Brahmins order them to take the Yajnopavita and study the Vedas, as every Hindu ought to do? And if the Vaishyas and the Kshatriyas do not exist, but only the Brahmins and the Shudras, the Shastras say that the Brahmin must not live in a country where there are only Shudras; so depart bag and baggage! Do you know what the Shastras say about people who have been eating? Mlechchha food and living under a government of the Mlechchhas, as you have for the past thousand years? Do you know the penance for that? The penance would be burning oneself with one’s own hands. Do you want to pass as teachers and walk like hypocrites? If you believe in your Shastras, burn yourselves first like the one great Brahmin did who went with Alexander the Great and burnt himself because he thought he had eaten the food of a Melechchha. Do like that, and you will see that the whole nation will be at your feet. You do not believe in your own Shastras and yet want to make others believe in them. If you think you are not able to do that in this age, admit your weakness and excuse the weakness of others, take the other castes up, give them a helping hand, let them study the Vedas and become just as good Aryans as any other Aryans in the world, and be you likewise Aryans, you Brahmins of Bengal.