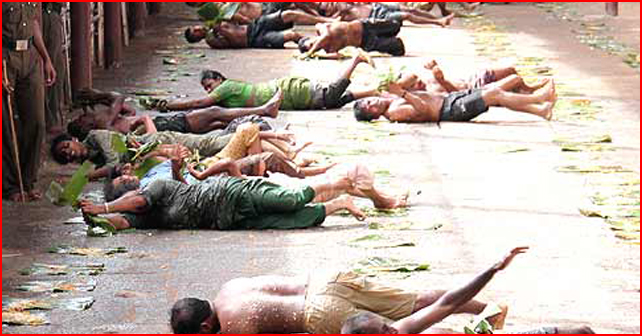 the Bill after passing through due legislative process will outlaw black magic, carried out in search of treasure, tantric acts that include physical and sexual assault, assailing people under the pretext of exorcism and creating panic in the name of ghosts.

Following the line of Maharashtra, Karnataka State cabinet has cleared the Bill to prevent evil, inhuman and superstitions practices, prevalent in the State.  The bill was prepared immediately after the present  government came to power in 2013.  For the bill, to see the light of clearance required some sacrifice just as in Maharashtra.  The draft of the Bill against superstitions was prepared by Dr. Narendra Dabholkar in Maharashtra and was pending in the State legislature for its due passing.  When the rationalist Narendra Dabholkar was assassinated by an unidentified assailant in 2013, the Bill got transformed as, “The Maharashtra Prevention and Eradication of Human Sacrifice and other inhuman, Evil and Aghori practices and Black Magic Act”.  The Bill on eradication of human sacrifice could see the light of the day only after the sacrifice of his life by the staunch anti-superstition activist – leader Dabholkar.

In Karnataka the process of the Bill seeing the light commenced with due clearance from the State cabinet only after the assassination of Gauri Lankesh, the rationalist writer, in October 2017.  The Bill named “The Karnataka Prevention and Eradication of Inhuman Evil Practices and Black Magic is set to be passed by the State legislature.

The reformative legislations claim the invaluable life sacrifices of eminent rationalists for the cause to strengthen the political will of the rulers, sidelining and ignoring the opposition made by the conservative traditionalists under the guise of politicians.  The boiling point of the state subjects is warranted for the rulers to act boldly, despite possessing some ideological commitment to the cause.  It has to get convinced that ‘Better Late than Never’.  The igniting process on the Bill becoming Act has commenced and has to be welcomed by all means.  The original Karnataka bill of 2013 has witnessed some changes, however the present features in the Bill seem to degrade the inhuman practices undermining human dignity.  One such appreciable feature is to ban the rolling on the leaves left with food by the Brahmins in some of Karnataka’s temple.  Similarly the Bill seeks to address indignities against women such as ostracism during menstruation and pregnancy or parading them naked in the name of worship.

Besides, the Bill after passing through due legislative process will outlaw black magic, carried out in search of treasure, tantric acts that include physical and sexual assault, assailing people under the pretext of exorcism and creating panic in the name of ghosts.

The proposed legislation will also outlaw rituals involving self-mutilation, such as piercing jaws and tongues with rods.  However it will allow pujas, yatras and parikramas at religious places, but ban occult practices undertaken to treat dog, snake and other reptile bites or other illnesses.

The present practice of rituals directed by traditional healers and astrologers on illness like cancer, minimizes the scope of curing through scientific and medical professional help when the patients approach them at the advanced stage of illness.  Such unwanted experience with traditional healers can be avoided by implementing the prospective legislation effectively.

It has to be borne in mind that the practices such as vastu shastra, astrology and numerology have been kept out of the purview of the Bill.  The reformers have to content themselves for the time being – ‘Something is better than nothing’.

The political will of the rulers especially the Chief Minister Siddaramaiah must not end with mere legislation but has to transform for the effective implementation of prospective Act.  The reform Act should not face the fate of Article 17 of the constitution, “Untouchability is abolished and its practice in any form is forbidden. The enforcement of any disability arising out of ‘Untouchability’ shall be an offence punishable in accordance with law.”

The action against superstitious practices, covered in the Bill must not be like the action so far taken on the offence of ‘untouchability’.

No doubt, the effective implementation of the Bill on passing is like walking over the knife; any slip would be exploited by the traditionalists in the political arena for their survival and expediency.

By all means, the efforts of CM Siddaramaiah have to be lauded despite the prevalence of superstition practices even among the legislators of the State, of course, the ruling party legislators.  He himself was discouraged by the normal events of crow sitting on his car and crow’s droppings falling on his white dhoti.  The media highlighted ‘Siddaramaiah haunted by crows’ and the political opponents propagated the event as bad omen which would dethrone the C.M.  He never get discouraged unmindful of the outcome, but went ahead with commitment to the cause of eradication of the superstitious practices, human dignity. Siddaramaiah is on his missionary move when the elections to the State Legislature is nearing in Karnataka.  The historic move of bringing the Bill as Act by the Government of Karnataka under the Chief Ministership of Siddaramaiah has to be appreciated and it deserves to be emulated by other States of the country.