DO YOU KNOW FROGS WILL BRING RAINS? IF NOT, KNOW IT NOW 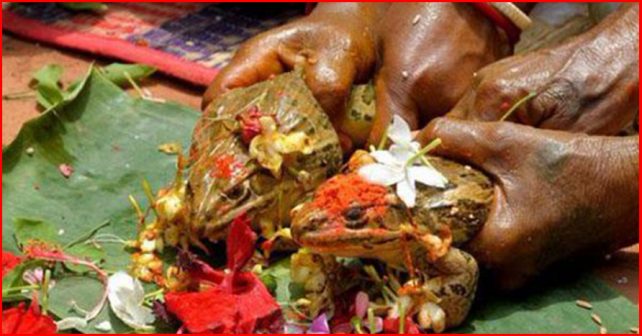 No rains? Drought? The land is parched? Crops have failed? Don’t worry. The condition can be changed. There is a sure way of getting rains. All that you have to do is to find a pair of frogs – no pair, a couple of frogs: one male and the other female. Then conduct a marriage ceremony, with all Hindu rituals including tying the yellow thread.

No, sir, I have not gone nuts. I am as sane as anyone could be. You don’t read newspapers? How did you miss this juicy bit of news?

It happened in Madhya Pradesh, in a village trucked in between Madhya Pradesh and Uttar Pradesh. When the rains failed, the villagers have dug a small pond, filled it with water and let two frogs in. Then they have conducted the marriage ceremony, tying the knot and all that, after which they have let both frogs into the water. We have no idea how the honeymoon went, however!

This might not have been newsworthy if one State Government Minister belonging to BJP had not presided over this function.

The minister, Lalitha Yadav has assured people that the marriage will certainly bring rains, and will immensely benefit the farmers. Non-sense? Stupidity? Superstition?

sshhhh… You will get booked for sedition!