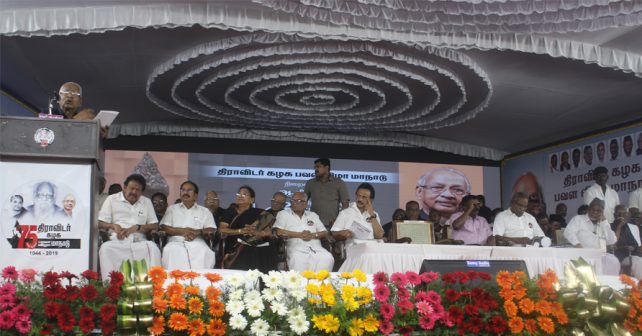 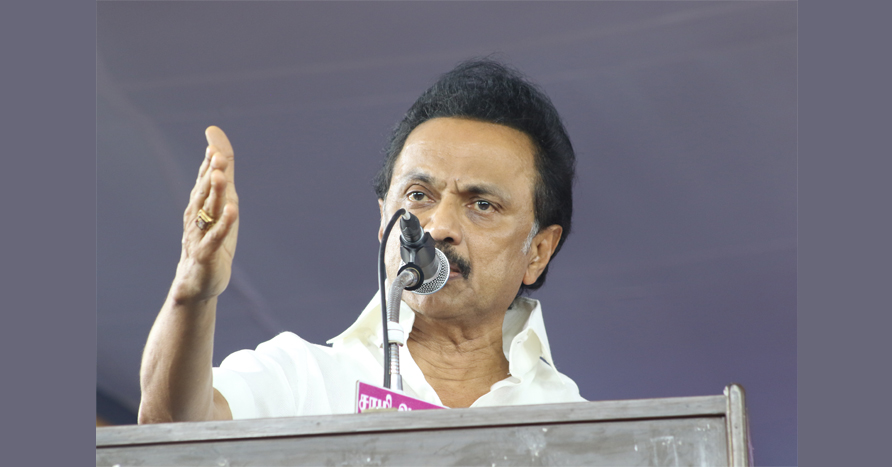 Background: Social revolutionary Thanthai Periyar fought against many centuries old discriminations, practised based on the birth of individuals which created graded inequalities in the society.  The thought process ignited the mind of Periyar during his primary school days itself. The progressive idea got strengthened in him as he grew up and held many public positions. But Periyar understood that the social disparities, prevailing in the society could not be wiped out only through individual efforts but also needs organisational initiatives for which Periyar joined Congress in 1919. During the course of time, all the progressive efforts, taken by Periyar were restricted and ignored by the upper caste hegemony in the Congress Party. Periyar left Congress in 1925 and established Self Respect League which became a progressive movement subsequently.

Periyar externally supported Justice Party (ruling the then Madras since 1920). He was the instrumental force for the Justice Party to stop whenever it deviated from original identity as non-Brahmin party. Due to inner party rivalries and letting down the co-functionaries, Justice Party lost miserably the election held in 1937. The frontline leaders of Justice Party, realised the precarious condition of the party and requested Periyar to lead them. Periyar became the President of Justice Party in 1939. Periyar wanted to convert the party into a mass movement instead of being dominated by wealthy people who did not interact with the public sufficiently. Besides, seeking the mandate of people by contesting election will not provide the opportunity for the party to propagate the ideology of the Party in true sense and fully. To overcome these limitations Periyar changed the name of the party and designed its functional style and approach. Dravidar Kazhagam (DK) was born on 27th August 2019 at Salem, Tamil Nadu. DK has completed its challenging journey of 75 years, like swimming against the turbulent current. It facilitated the political rulers to legislate on many progressive measures and liberated people from social slavery, enabling them to lead a dignified life.

DK is a unique movement that has been accomplishing the social task by mobilising public opinion through sustained propaganda, focusing attention and the imperative compulsion on the part of the rulers to legalise the progressive measures. Public opinion marches forward; Law will come limping behind – is the adage that very much suits DK to show its explicit functioning. Such a social revolutionary movement DK celebrated its Platinum Jubilee (75 years) on the same day: 27th August (2019) – at the same place: Salem.

Platinum Jubilee : The celebration was a one day event. The celebration proceeding commenced through the flag hoisting by Prince Ennares Periyar, Secretary of the State Students’ Wing. The forenoon session was presided over by the Poet Kali. Poonkundran, the Vice-President.  The portraits of Thanthai Periyar, Annai E.V.R. Maniammai and the Self Respect stalwarts (symbolically) were unveiled by the senior functionaries. DK is signified by its organised functioning, the approach and action plan, accomplished through passing of resolutions in every conference. In the Platinum Jubilee, 25 resolutions were proposed by the various, regional, district functionaries of all the wings of DK. The session was presided over by V. Kumaresan, Treasurer. The explanatory note on the proposed resolutions was by G. Karunanidhy, Secretary-External Relations. A Seminar was presided by S. Arivukkarasu, the Presidium Chairman and the speakers were Prof. Dr. P. Kalimuthu, Dr. Anbalagan and Dr. Durai Chandrasekaran, General Secretary. 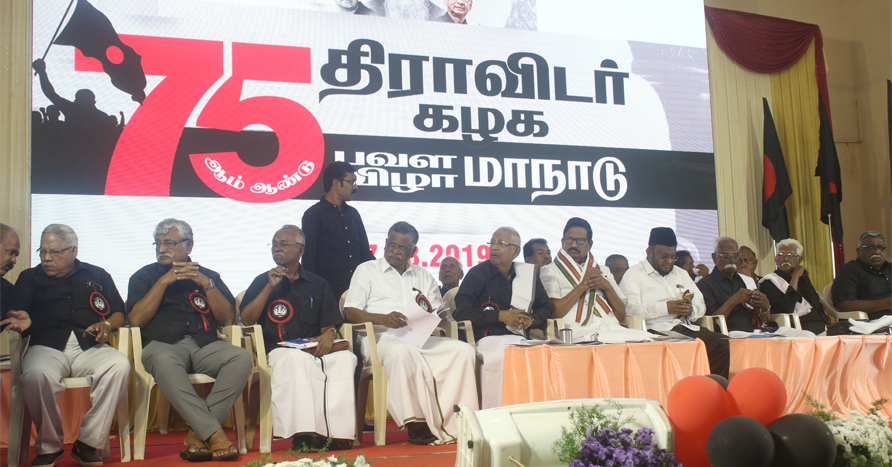 Public Procession : The integral event in all the conferences of DK is its organized public procession. In the evening there was a massive public procession with the participation of Black Shirt cadres of both the genders in multitude holding the appealing DK flag, raising slogans which signified the ideology and strategic approach of DK. The procession moved through the residential areas at large. The residents (mostly believers) not only came out, and witnessed the procession, but voluntarily supplied drinking water to appease the thirsty throat of the slogan raising cadres. (all are proclaimed non believers). The real bond and the belonging of oneness of the public and the cadres was once again proved. The procession was held in a well disciplined manner without causing even an iota of inconvenience to the people and disturbance to the public order. 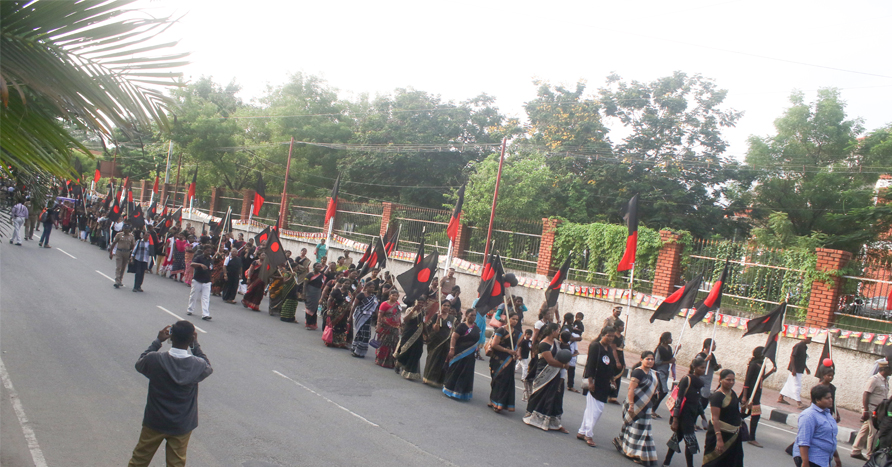