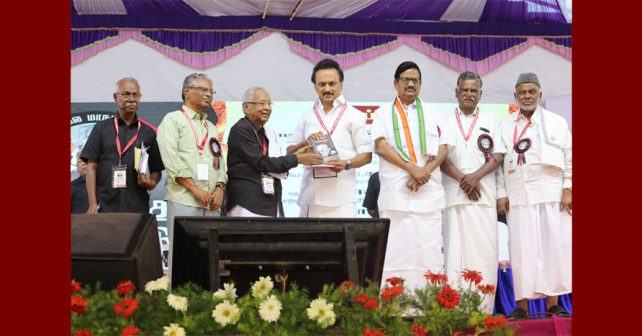 The leaders of mainstream political parties, participating in the Conference
Thanjavur, 24th February 2019.

More than seven decades have gone by since the dawn of Dravidar Kazhagam(DK) the transformation of the erstwhile Justice Party founded in 1916 against the political, social and religious hegemony of the Brahmins. The DK, to begin with under the benevolent and effective leadership of Thanthai Periyar was only a self respect movement but grew into its solid magnificence by stages. But for Periyar, nobody could have nurtured that unit much against the wily Brahminstic antagonism. Presently the DK is a vital force to be reckoned with, because of a tireless and self— assertive single individual Asiriyar Dr.K.Veeramani, President, Dravidar Kazhagam without whose strenuous and singular efforts, Dravidar Kazhagam would not have been as it is. In organizational acumen, in his consistent propaganda of rationalism, in active camaraderie with rank and file of the Kazhagam, and in disseminating the principles through pamphlets, booklets and voluminous works in Tamil and English and at length, in extending the growth of the mission in the United States as well as in Eurasian countries, he is unique and peerless. Thanks to his dynamism and unparalleled leadership, Dravidar Kazhagam is vibrant and energetic. It is the only organization backed not by billionaires and millionaires but by plebeians, peasants, poor men and women. Young and energetic activists go around and collect meager amounts voluntarily offered by multitudes of supporters to sustain the party. Popular support to the Dravidar Kazagam is spontaneous. Gathering in its meetings and conferences is not hired but fired by enthusiasm and exuberance.

Recently held two day conference on February 23-24, 2019 of Dravidar Kazhagam is an example – state level Meet on the first day and for Social Justice on the next. Men, women, young volunteers and general public were in thousands in the spacious venue of the conference at Thilakar Thidal, Thanjavur. A small but highly informative ‘Photo Exhibition’ at the entry point chronologically capsuled as to how human rights were atrociously tampered with, by the varnashramites. The exhibits tore the codes of Manu into shreds and many visitors were found taking notes from theme The book stalls in the venue were sufficiently packed with thematically relevant volumes. The Dravidar Kazhagam believes in creating an awareness of rationalism among the public and hence book release and book sales continue to be a regular feature in the meetings of Dravidar Kazhagam, a tacit indication that a great leader who is heading the Kazhagam is a voluminous reader, effective speaker and a prolific bi-lingual writer. His books are sold like hot cakes in a bazaar.

Songs imbued with atheism heralded the events of the First day. Film strips of the State level students conference held at Kumbakonam was screened on the stage . All over the venue, arrangements of audition and visuals were perfect.

Self Respectful V. Anburaj, General Secretary cordially extended a note of welcome and pointed out the importance of Thanjavur as a venue of various conferences of the DK from 1957 onwards. He outlined the fact that it is the untiring work of the DK that has made the State of Tamil Nadu free from caste system. He added that the week – long efforts to organise the event bore fruit in the perfection of seating facilities, elongated stage with rostrum and the acoustic arrangements. Just on time, Asiriyar Dr.K.Veeramani stepped into the venue with the flag in hand, walked straight into the public arena and exchanged pleasantries with them before climbing on the stage.

After hoisting the flag of the Kazhagam, Self Respectful V.Kumaresan, Treasurer highlighted the fact that social justice has been the back bone of the party right from the days of Thanthai Periyar. For perpetuating this noble cause, Periyar walked out the Congress party and started a non- political movement of his own. It is due to the relentless struggle of the present great leader, Tamil Nadu alone enjoys 69 per cent of reservation. But the recent 10 per cent reservation for the so called economically weaker sections is a challenge before us. Our strategy now is not to struggle for amendements but to get that faulty amendment revoked.

The conference was declared open by the Presidium Chairman Self Respectful S.Arivukkarasu and he highlighted the salient features of the two – day events . The poet Kali.Poonkundran, Vice President presided over the first day events. In his brief but scintillating address, Asiriyar K.Veeramani recalled the valuable services rendered by the late lamented Dr.Kalignar M.Karunanidhi.

On his request, as a mark of respect to the demise of about forty CISF soldiers in the Kashmir sector because of terrorist, the audience stood in silence for a couple of minutes. The President, DK brought to light how the Fascist rule of the Centre has been sadistically encouraging the RSS to indulge in fanatic religiosity. He regretted that those who rule the State go with bended knees before saffron political leaders and felt satisfied in being totally subservient to them. The duty of the assemblage therefore is to perform a silent revolution by eliminating Manu, adharmic rule of the Centre. 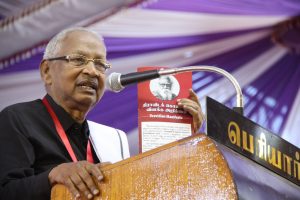 Portraits of Periyar, Annai Nagammaiar and Annai Maniammaiar were unveiled respectively by Messers.Suba.Veerapandia, General Secretary, Dravidian Tamil Federation and Rajagiri Thanjagaraj. Then began the passing of the resolutions of which the most essentials include reservation for the couples of inter-caste marriages, jobs for the trained archakas, rejuvenation of the Central Institute of Classical Tamil, release of the SEVEN accused in Rajiv Gandhi case, self defense training for women, prevention of non-Tamils from monopolising job opportunities in Tamil Nadu, total prohibition, education to be brought back as a State subject and celebration of Maniammaiar Birth Centenary. The ‘Dravidian Manifesto’ declared by the President, DK in the afternoon function and the sum total of resolutions were almost alike and reiterative.

A seminar on ‘Secularism’ was organized on the 23rd itself and in it about ten speakers participated to deliberate on State Rights, Education, Superstition, and Brahministic domination.

A huge procession of men, women, youths, boys and girls was spectacular with flags, festoons and banners with chosen quotes echoed and reechoed by the cohorts. The colourful cavalcade started at the Railway Junction and covered about five kilometers through the main streets of the historic city before reaching the venue of the conference To disprove that it is not the blessing of ‘goddess Mariatha’, young women carried in hands earthern pans with burning neem leaves and incense. So also the scene of young boys stood on the dazzlingly sharpened upward swords and scythes. This flamboyant march of young stalwarts was witnessed by the President, DK from an elevated stage in the West Main Street. Identical to that of a commander witnessing the march past of a retinue of soldiers.

Self Respectful Arulmozhi, Propoganda Secretary enumerated the sterling qualities of Maniammaiar such as frugality, simplicity, boldness during the Emergency and conducting of Ravana Leela in retaliation to the Rama Leela celebrated by the rulers at Delhi. Devoid of emotion and verbal jugglery, her delivery was sedate and subject oriented. Film strips for about thirty five minutes depicting the ‘Periyar World’ coming up at Siruganur and the selfless services of Maniammaiar were shown in the venue. Vaiko, General Secretary MDMK and Poet Vairamuthu addressed the conference and underlined the importance of eliminating the dogmatic rule of the Centre. The poet has been emotional in recalling the services of Maniammaiar, and in comparing her to Nivedita.

Asiriyar Dr.K.Veeramani occupied the chair on the second day of the conference that was meant for social justice. He cautioned the public against permitting the fascist Centre to continue. Supporting the Corporates by the Centre is detrimental to the economy of the nation, he added. He exhorted the people not to fall a prey for the pittance offered during the elections. He recalled how the ‘income ceiling’ for reservation BC’s came into effect in Tamil Nadu and reminded the fact that after burning his finger in the Parliament elections, how MGR rescinded the earlier order and raised the Backward Class reservation from 31 to 50 per cent on DK’s suggestion. The most unforgettable statement he made was that Periyar had been the only leader who ruled the State without ruling the State dejure. Portraits of  Ambedkar, Arignar Anna, Kamaraj and Kalaignar were unveiled on the stage. Thol. Thiruma Valavan, President, Viduthalai Chiruthaikal Katchi and Mr.Kantharaja, Chairman, Karnataka State Commission for Backward Classes, Ezra Sargunam, Social Justice Movement of India and Adhiyamaan, Adi Tamilar Peravai were the opening speakers. About sixteen resolutions were passed when Self Respectful. G.Karunanithi, Secretary – External Relations presided over. Essential and topical resolutions include the abolition of creamy layer in reservation policy, quotas of reservations even in private sector, also in judiciary, elimination of NEET examination and also of the removal of ten percent for the economically weaker sections, and centrally conducted examinations to be in all the regional languages.

A women – only seminar to highlight their bold uprightness began in the forenoon. The topics included ‘Why Manu dharma was burnt’, Why not 33 per cent reservation for women and also to affirm that Periyarism is the only solution for the freedom of women.

President of the Dravida Munnetra Kazhagam and the Leaders of opposition in the Tamil Nadu State Legislative Assembly Mr.M.K. Stalin outlined the parental relationship that exists with Dravidar Kazhagam. He stressed the point that the path to be trodden by the DMK is decided by Periyar Thidal (Head Quarters of Dravidar Kazhagam) and no power on earth could annihilate the Dravidian Movement. He made a fervent appeal to the leader of the Dravidar Kazhagam that he should live long and continue to guide the contemporary younger generation. He also movingly recalled that when he was a detenu in the horrible MISA era during the emergency, it was the Asiriyar Dr.K.Veeramani, who was a source of inspiration for him. He added that his participation in the Conference of Social Justice has given him a feeling of having come to his own home of maternal love and paternal affection.

Thus the two day conference of Dravidar Kazhagam at Thanjavur has been stupendously successful and heralded a bright future for its further growth and overall development. Those who scrupulously attended the Conference went back with a feeling that a hey —day for Dravidar Kazhgam is not far off.