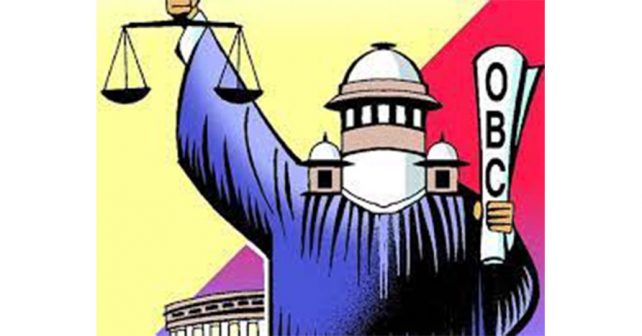 The announcement by the Modi government providing for 27 per cent reservation for Other Backward Classes (OBCs) and 10 per cent reservation for Economically Weaker Sections in the all-India quota for undergraduate and postgraduate medical and dental courses from the current academic year is being hailed by the BJP and its supporters as an example of the Modi government’s commitment for the welfare of OBCs. The prime minister has hailed this decision of the government as a “landmark decision”.

However, the record of the government in this matter speaks otherwise.  In fact, the government was forced to act, as the Madras High Court had warned of contempt proceedings as the union government had failed to act upon its earlier verdict given in July 2020.

Earlier, in 2007, the Supreme Court had directed that under the all-India quota, 15 per cent should be reserved for Scheduled Castes and 7.5 per cent for Scheduled Tribes.  However, there was no provision for OBC reservation in the seats under the all-India quota.  This is despite a central legislation adopted in 2007 during the UPA government providing 27 per cent OBC reservation in central educational institutions.

The DMK and other major political parties from Tamil Nadu, including the CPI(M) and other mainstream parties and organisations, had gone to the Supreme Court asking that 50 per cent reservation be provided for OBCs in the seats surrendered by Tamil Nadu to the all India quota.  The Supreme Court had declined to take up the matter and stated that it could be heard by the High Court.  So these parties filed a petition in the Madras High Court.  The High Court, in July 2020, upheld the legality of OBC reservation and directed the centre to decide the modalities for quota from this academic year.  However, the National Testing Agency did not provide for OBC reservation in this year’s scheme.

The DMK filed a contempt petition in the Madras High Court regarding this and the High Court observed on July 19 that “The Union’s attempt to not implement the OBC reservation quota in respect of the all-India quota seats in the state in the academic year 2021-22 appears to be contumacious in derogation of the order dated July 27, 2020 passed by this court”. It is after this court observation that the centre, faced with a charge of contempt of court, was compelled to announce the OBC reservation in the all-India quota.

The callous and partisan attitude of the Modi government on the issue of OBC reservation was also displayed in another related issue.  The Modi government had got a constitutional amendment passed in parliament to provide constitutional status for the National Commission for Backward Classes in August 2018.  It introduced clauses by which the power to notify a class as socially and educationally backward class (SEBC) was vested with the president.  At that time, in parliament, opposition members had pointed out that this may adversely affect the right of the states to identify OBCs. But the government brushed aside these objections. Till then, the central government through the National Backward Classes Commission was identifying OBCs for the central list while state governments through the State Backward Classes Commissions were undertaking that job for the state list.

This constitutes a serious attack on the right of states to determine who OBCs are within their states.  Though the Modi government has maintained that the constitutional amendment was not meant to deprive the states of their rights, it did not take any steps to undo the damage.  This required amending the constitution to rectify the earlier mis-step.

Instead of doing so, the Modi government went for a review petition to the Supreme Court which was rejected. The Modi government should have straightaway brought a constitutional amendment to restore the rights of the states on identifying OBCs in the current monsoon session of parliament. However, after wasting time, the cabinet has now in the middle of the session decided to introduce a constitutional amendment.  The thoughtless action of the government earlier which resulted in the denial of a vital right of the states needs to be rectified forthwith.