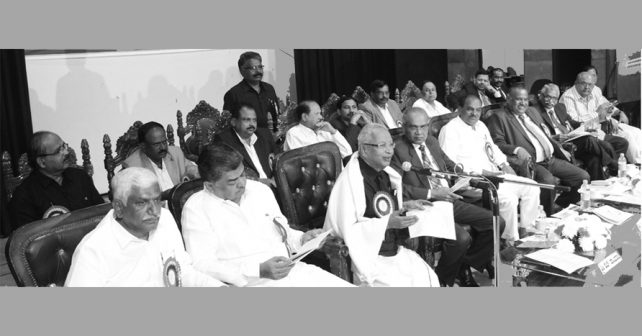 … continuing from the previous issue

Reservation in Employment under Article 16(4) is meant for the Backward Classes, not adequately Represented

Reservation is meant for the Backward Classes including the Scheduled Castes and the Scheduled Tribes who have been put historically in the lower rungs of social hierarchy.  Because of their positions in the society they were denied education and employment of their choice as per the so called ‘divine dictum’.

To accomplish this task of dispensing social justice provisions were made originally as well as later through the insertion of new provisions by  amending the Constitution.

“Nothing within article shall prevent the State from making any provision for the reservation of appointments or posts in favour of any backward class of citizens which, in the opinion of the State, is not adequately represented in the services under the State.”

Reservation aims at Adequacy of Representation

The probable beneficiaries who are going to get reservation as per the 103rd Amendment are already represented more than the adequacy level even before the present introduction of reservation for them.

If reservation is extended to both the categories, who are inadequately represented and who are represented more than the adequacy level, it would result in widening the inequality already existing in the society.  It is against the philosophy of social justice i.e. attaining equality with the noble aim of ‘all is meant for all’.

Besides, the economically weaker sections who are eligible to get reservation as per the Constitution (103rd Amendment) Act 2019 were not identified by proper enumeration through any survey about their actual numerical representation.

Recently struck down of Reservation on economic criterion

Not only in Indira Sawhney case, but in Dayaram Varma Vs State of Gujarat case, when the ordinance promulgated by the State Government of Gujarat for reservation for the upper castes was challenged, the High Court of Gujarat (as per the verdict dated 4.8.2016) quashed the promulgated ordinance.

To pass the present Bill as an amendment to the Constitution as per Article 368 in this respect the following conditions have to be satisfied.

–      Not less than 50 percent of the total members of the House must participate at the time of voting.

–      Of which at least 2/3 members have to exercise their votes supporting the Bill.

Background of Dismissal of Opposition Members in the House!

It is quite natural to raise doubts about the dismissal of the members of opposition hailing from the South for the rest of the period of the current session. After the dismissal, the members who are present in the House would be not less than 50 per cent of the total strength of the House. Out of this (not less than 50 percent strength), it would be easy to secure votes of 2/3 majority in favour of the Bill. It appears such dismissal of members has never happened earlier; perhaps it might have been carried out only with the agenda of bringing the Bill and securing the desired support for it.

The Bill will not withstand Judicial Scrutiny

It is very doubtful whether the 103rd Constitutional Amendment which is against the basic structure of the Constitution will withstand judicial scrutiny.

23 years have passed by after the implementation of Mandal Commission recommendation for 27 percent reservation for other Backward Classes in the Central Services. But as per the information sought under RTI Act dated 1.1.2015,  it is revealed that only less than 12 percent of posts reserved for OBCs have been filled. Without finding any remedy to rectify the injustice meted out to the OBCs, the BJP government worries about the reservation for the upper castes. It exposes the upper caste favouring mentality of the ruling BJP in a clear cut manner.

The political parties that supported 10 per cent to the poorer sections among upper classes will have to later regret their decision.

The Central government’s hasty passing of the 124th Constitutional Amendment Bill providing reservation for the upper classes on economic basis has ulterior motives.

The reservation policy followed for upholding social justice was arrived at after a hundred years of prolonged wrangling and a number of agitations.  It is with the ulterior motive of shattering the foundations of this policy that the constitutional amendment bill providing for 10 per cent reservation in educational and employment opportunities for the poorer sections in the upper classes, was rushed through in two days in both the houses of parliament which received the President’s assent immediately thereafter, was notified in the Gazette and came into force on 14th January 2019.

Never in the history of the Indian Constitution has a constitutional amendment been made in such a hurried manner.

Almost all the opposition parties, with the exception of the DMK, have voted for the passing of the Bill, but are later concerned about the malafides of the move. Is this not an act of locking the stable after the horse has bolted? It is one of the paradoxes of politics.

Only South can lead in Social Justice

Thanthai Periyar and the Dravidian Movement are architects of social justice.  Those who never learnt politics from them cannot understand all the dimensions of the reservation policy.  It was only the South that brought about the first constitutional amendment, enlightening the whole of India.

Anomalies in this ‘Economic criterion’

If the 103rd Constitutional Amendment Act comes into force, its inbuilt contradiction (owing to the ever changing economic yardstick) is bound to face a lot many anomalies.

The government considers those who earn Rs.27 per day in rural areas and Rs.33 in urban areas as being below the poverty line (BPL).

What does the IT Department say?

As per IT department one who earns Rs.2.5 lakhs per year is an IT assessee.  He is ordered to pay Income Tax.

But ‘the poor person of the upper caste’ as per the government’s definition can earn upto Rs.8 lakhs – three times the qualification for a tax assessee. Can there be any worse buffoonery?

Though the legal battle may soon go on one side, what is essential is popular uprising.

I would like to quote the great Doyen of Social Justice of our times L.G. Havanur in classic observation in the historical Karnataka Backward Classes Report in 1979.

Solutions to social and economic problems must be found by a realistic and rational approach, possessing first a comprehensive and an over-all picture of our society from all its angles and of all its aspects.  A dry and cold-blooded judge, a communal administrator, an ambitious politician or an enthusiastic social scientist is bound to commit mischief of inestimable magnitude when he calculatedly ignores, suppresses, minimizes or mis-interprets the significance of the realities of our social order, and the influence of our social institutions.  Every one reveres his religion as a Hindu; besides revering his religion, loves his caste. And so, everybody is bound to be parochial in practice, though outwardly in his speech he tries to project himself as a detached cosmopolitan.

Let us augment the support from the socially deprived sections by enlightening the cause of Social Justice and its dispensation to them!