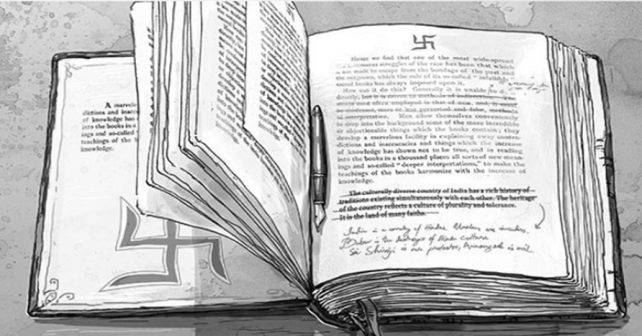 The entire base work to implement Hindutva agenda was almost completed during the BJP rule (1999-2004) at the Centre when A.B. Vajpayee was the prime minister.  The political team under him, the Home Minister L.K. Advani and Education Minister Murli Manohar Joshi particularly trampled over education, culture, academic freedom and minority rights.  It is the RSS that dictated the policies of the BJP-run government.

The first educational policy of the country had been formulated in 1986 and a framework for the implementation was brought out in 1988.  The policy stipulated that national education policy should not be modified by executive orders but only by the national Parliament.  But the National Curriculum Framework for School Education was proposed after 12 years by the then BJP rule without any consultation with either the Central Advisory Board of Education or the Parliament.

The corner stone of the BJP’s educational policy is ‘value education’, the other name for religious (Hindu) education.

The framework suggested that the content and process of education was to be reoriented for social cohesion.  In letter, cohesive society means the one where equal opportunities are available to everyone and not the same treatment for everyone.  But in practice backed with the spirit of the frame work, the BJP rule started to ensure that every individual receives a suitable education at a pace and through the methods adapted to a particular person.  To say explicitly, Brahmin children and children who belong to the groups suffering from specific disabilities and social discrimination cannot be treated equally.  Social cohesion, which the framework tries to bring emphasizes ‘life skills’, apart from acquiring knowledge. Under the present circumstances the pointed out ‘life skill’ is the skill that is easily accessible by everyone is the family level ‘life skill’; it is nothing but ‘kuladharma’, as advocated by Manusmiriti.  To sustain ‘kuladharma’, the only system of education conducive would be ‘kulakalvi’ meaning the descendants of every family have to carry out the family profession.  The educational framework with the mark of progress drags the society way back to many centuries where social hierarchy and discrimination were the order.

If anything is explained in a scholarly way, it could be accepted by everyone. This sort of approach has been well adopted in the formulation of educational curriculum framework.  The framework says, education for ‘the gifted and talented’ (who are none other than the descendants of the privileged upper caste to say specifically Brahmins) must be accomplished on the basis of a broad conceptualization of the process from multiple perspectives rather than as a search for a unitary human attribute.  It is the principle of saffronist to talk on ‘uniformity wherever ‘unity’ has to be ensured.  But here, it is not for uniformity in the education, it talks about a unitary human attribute that is not desirable, which advocates multiple perspectives.  The frame work further says, ‘not only their (student) IQ (Intelligent Quotient) but also their EQ (Emotional Quotient) and SQ (Special Quotient) ought to be assessed.

This type of measuring the attitude of students will result in vast disadvantage to the pupils who hail from lower strata of society, contributing only through physical labour.  Definitely the IQ, EQ and SQ of the students of such families will differ from those attributes of students hailing from upper strata viz. Brahmin children.

When the measuring yard for the attributes (IQ, EQ and SQ) are not founded accurately, how will the results deliver the correct picture from which educational development plan has to be proceeded with?

The major change in the education offering institutional environment is switching over to corporatization of education, enabling the accomplishment of Hindutva agenda speedily too.  Education is fundamental for the progress of the society to attain further leads and heights in future.  For such a vital plan, the funding and financial resources must largely forthcome from the government.  Instead of government funding for education development, the policy recommend for the tapping of corporate sources.  This is the demarcating point for the transition of ‘education’ from development based ‘service’ to profit oriented ‘investment’ process.

Corporatisation of education will lead to categorization of the institutions and courses to suit the students coming from different strata of the society and background.  With this, equal opportunities to all are not ensured.  Segregation of students, in the style of discrimination of people into different educated classes, will soon be implemented which is nothing but ‘varnashrama’ in a different form. Whatever exercise taken during the past for the onward march though at fewer paces will gain momentum fast but in reverse owing to the entry of corporates. Deterioration is planned in the name of development.

In respect of curriculum, despite the categorization of different system of education in the name of life skill imparting, a uniform ‘core curriculum’ for all students is made compulsory. The Core Curriculum consists of Six Disciplines – Yoga, physical education, music, Sanskrit, Sanskrit gyan (knowledge of culture) and moral and spiritual education.  The core curriculum is the mode through which the Hindutva view point is pushed for.  For instance, a lesson on the life of ‘Guru’ Golwalker is prescribed reading in Tamil for students of class VII in the Vivekananda Kendra Schools in Tamil Nadu. The prescribed texts carry the vital message of Hindu pride which is nothing but Brahminical pride that is imparted as education in the country.

The Hindutva knitted policy violated the National Policy on Education formulated in 1986 and 1992 in which the thrust was given to secular values. Hindutva values will become the order through imparting ‘value education’.  Everything conducive to Hindutva has been well planned under the banner of National Education Policy 2019 released at the start of Modi 2.0. It is a draft; it would not be longer to get it finalized.  What was planned as sowing of seeds has grown up and became ready for rich harvest by the Hindutva outfits.  Let the aggrieved sections get awakened and realise the danger to which not only the current generation are posed to but to the posterity too!