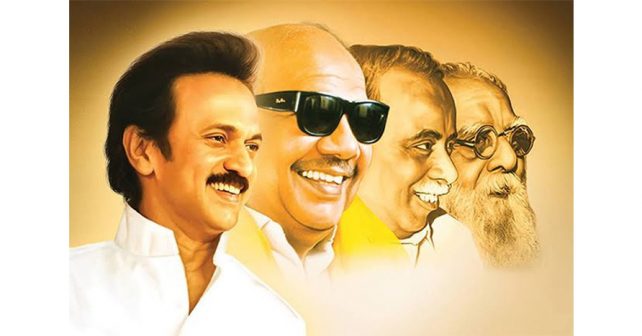 “Dravidam” means equality and is not discriminatory. Dravidam is science exclusive in society and naturally truth aiming for thebetterment and advancement of humanity inclusive!  The ideological opponents of Dravidam ideology try to project it as sectarian and discriminatory. It is all embracing and providing everything to everybody. It may appear discriminatory but it is compensatory and protective against the inhuman injustice, prevailing in the land for many centuries.  The meek obedience and subordination to the unjust supremacy is not acceptable to Dravidam concept. It revolts against violence, the social insult to the multitude of the toiling people in the society which are of birth based and perpetual in practice for many a generations. Dravidam is fighting to get back the basic human right of education, health and employment for descent livelihood which were the monopoly of certain sects for centuries in our country.

Thanthai Periyar used this historical and cultural identity and practiced a broad canvass of humanity. Dravidam was made as a principle of human life and was facilitated as a governing model politically on a mass scale with wider outreach by Periyar. Later on it was articulated and popularised as their functional base by many political leaders.  The Dravidam model was successfully implemented to begin with a century back and effectively for the past 50 years.  The agenda of ruling with Dravidam model is still lasting and it has got many ramifications in the ruling governance of the country.  It is not limited to a particular political party and is acceptable for adherence by all without any barriers. This transition in the political governance has not occurred over a brief period.

A century ago the Dravidam model was practiced in its uncrystallised form.  With the pride of its identity, the governance has been lasting for half a century in Tamil Nadu State, characterizing it distinctly from the rest of the States in the country.  Recently, a rejuvenation has been mandated by the people of Tamil Nadu through electoral process to reinforce the Dravidam model by their ruling representatives under the DMK’s chief minister M.K. Stalin.  The leadership of DMK is the matured manifestation of the Dravidam model that was administered earlier by the prominent leaders of Justice party (1920), the emergence of rule of Dravidian political parties since 1967  and earlier with the intermittent leaders of other political parties who were made committed to the Dravidian principles not expressively but through their governing endeavours under the patronage of Periyar and all that put together has successfully evolved as  time tested ‘Dravidam Model’ for any rulers in any part of the country or the world.

In 1916, the South Indian Liberal Federation (SILF) was formed as the manifestation of non-Brahmin movement and it came to political power in the Madras Presidency (presently Tamil Nadu) in 1920 in the first election conducted during the British rule under diarchy. Only limited governing powers were vested with the elected rulers, Justice Party (SILF was later known popularly as Justice Party, in the name of its official magazine, ‘JUSTICE’).

With those powers, Justice Party rule delivered significant contributions to the Dravidam Model of governance.  One of the founders of Justice Party Sir Pitti Theagarayar, while he was the Mayor of Madras Municipal Corporation started the mid-day meals programme for the children studying in the schools of the Municipal Corporation.  Hungry children cannot listen to the classes. Justice Party enabled the education to the denied section besides appeasing the hunger of the students.  During the rule of the first minister King Panagal, the initiative was started through the formation of Hindu Religious and Charitable Endowment Board to effectively manage the Hindu temples, endowed with enormous wealth contributed by the public, for the welfare of the common people.  The first communal G.O. was passed in 1921 with its implementation in 1928 and that paved the way for due provision for reservation in Indian Constitution after independence in 1947.  The ‘unapproachable’ section of the society were allowed to use the public pathway which was denied earlier. The Justice Party’s rule lasted upto 1937.

In Independent India, the first premier of Madras Presidency Omandur Ramasamy included the concept of reservation for backward classes.  Historical close association of Omandur Ramasamy with Periyar as early as in 1924, on the principle of equality and equal treatment at the Cheranmadevi Gurukulam (residential school) between the brahmin and non- brahmin students in dinning enabled the uplift of backward classes.

When the education denied classes were provided with education, C. Rajagopalachariar, the chief minister of Madras State introduced the Kulakalvi Thittam in the name of New Education Policy in 1953, wherein the school students had to attend the school for half a day and in the remaining half they had to attend the work of their father.  It was nothing but bringing back the varnashrama dharma, where the people have to carry out the occupation destined by their birth perpetually.  Periyar opposed the move of C. Rajagopalachariar vehemently, consequently the chief minister had to step down.  Besides, C. Rajagopalachariar closed more than 2000 schools for paucity of funds to manage them.

Even though Periyar was not a Congressman in 1954, he along with Varadarajulu Naidu convinced Kamaraj to succeed C. Rajagopalachari as chief minister, Kamaraj withdrew Kulakalvi Thittam and reopened all the closed schools.  Besides he opened 3000 more schools and introduced the mid-day meals programmes to students throughout the State. A revolution at school level education took place during that period. Kamaraj implemented what Periyar had predicted on Dravidam Model. The media that opposed Periyar’s progressive moves commented thus, “Periyar is cause and Kamaraj is effect.”

In 1967, the rule of Dravidian parties commenced, with the pioneering victory in Tamil Nadu by DMK and Anna (endearing from of C.N. Annadurai) assumed as the chief minister of the State. During the less than 2 year-stint in office Anna designed the political ruling legacy for Tamil Nadu.  He was successful in three fronts: One is the change in the name of the State from Madras to Tamil Nadu, second is the two language policy viz. only Tamil and English  for Tamil Nadu and the third, bringing sanction to the Self Respect Marriage started by Periyar (1928) by enacting an exclusive legislation. With that all the Self Respect Marriages got both retrospective and prospective legal sanction.

The core principle of Dravidian rule was providing equality to the deprived through protective discrimination under reservation both in education and employment. During the AIADMK rule of M.G. Ramachandran in 1979, contrary to the Dravidian principle, a G.O. was passed by introducing economic criterion on reservation to the backward classes and that was resisted heavily under the initiatives taken by Dravidar Kazhagam. After experiencing the massive defeat in the 1980 Lok Sabha elections, M.G. Ramachandran withdrew the G.O.  To offset the damage, he enhanced the reservation for the backward classes in the State from 31 per cent to 50 per cent.

With the efforts taken by Dravidar Kazhagam during the AIADMK rule of J. Jayalalithaa in 1993, an exclusive legislation was enacted in the State, the First Act for the cause of reservation in the whole of the country, to protect the total reservation of the prevailing 69 per cent in the State.  The assent of President of India was obtained and the enactment was placed in the IX Schedule of the Constitution through the 76th Amendment to get protection from the judicial review. The initiative was the historic move on social justice front in the whole country.

The rule of the legendary leader of DMK by Kalaignar M. Karunanidhi as chief minister on five tenures brought many significant contributions to the Dravidam Model for the State

*               Spectacular development on higher education front by opening many arts and science colleges and by establishing many universities both on technical and arts front to give special focus on the respective higher education.

*               Exclusive development and rehabilitation boards were created to uplift the standard of living of the poor and deprived classes.

*               Many minute and subtle proceedings to arrest the imposition of Hindi and Sanskrit languages.

*               Enactment for the appointment of archakas, hailing from all the castes with due qualification, in the Hindu temples, under the control of the Department of Hindu Religious and Charitable Endowment.

The above achievements are only illustrative and not exhaustive. The role of Kalaignar M. Karunanidhi had imprinted on many a fronts on Dravidam Model, the result of which would be visible fully only in the longer run.

After the demise of Kalaignar, the media both print and electronic pinpointed repeatedly as if a vacuum was created in the political scenario of Tamil Nadu. DMK  President, M.K.Stalin with his 50 years in public life both in politics and in governance as MLA, Mayor of Chennai Corporation, Minister and Deputy Chief Minister has blasted the media phobia when the DMK alliance led by him won an almost clean sweep in the Lok Sabha elections held in 2019 and the rest of the country looked at him noticeably.  When the media and the opposition did not accept the victory of DMK and focused it as if it was directly relevant for the State rule. By acting more through deeds than by words, M.K. Stalin once against proved the victory of Secular Progressive Alliance led by him in the recently held elections for the Legislative Assembly of Tamil Nadu.  M.K.Stalin has assumed as chief minister at a critical time when the Corona pandemic is at its peak.   With his matured and meticulous governance, he is able to control the pandemic situation efficiently. His noble qualities of associating all the experts, administrators including the opposition parties exhibit his sagacity of governance. In respect of commitment to the Dravidian identity and ideology, he tweeted after assuming as chief minister as “I am a Dravidian” in the style of the founder of DMK, Anna while delivering his maiden speech in Rajya Sabha in 1962 “I hail from Dravidian stock”. The Dravidam Model has taken off smoothly with M.K. Stalin as the chief minister of Tamil Nadu. The core Dravidam principle of equality and equality of opportunities to all would be sustained.  The Dravidam Model so far in practice would not only be replicated but diversified in different dimensions.  Dravidar Kazhagam, the parent organization for all the Dravidian political parties will continue to fortify the DMK rule and remain as an ideological adviser as it did earlier.  Let the motto of ‘All (materials & services) are meant for All (all humans)’ become more meaningful during the current rule of the Dravidian party i.e. Dravida Munnetra Kazhagam!