Extraordinary Letters on Love,Life,Death,Courage and Moral purpose without Religion 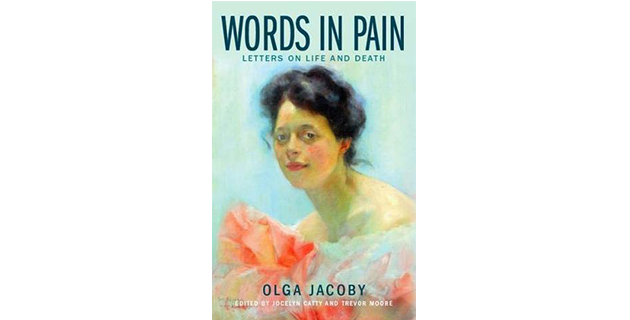 From a Victorian woman who lived and died with uncommon bravery

Half a century before Frida Kahlo made her impassioned case for atheism as a supreme form of freedom and moral courage, before Robinson Jeffers insisted that the greatest spiritual calling lies in contributing to the world’s store of moral beauty, before Simone de Beauvoir looked back on her life to observe that “faith allows an evasion of those difficulties which the atheist confronts honestly [while] the believer derives a sense of great superiority from this very cowardice itself,” a German-Jewish Englishwoman by the name of Olga Jacoby (August 15, 1874–May 5, 1913) — the young mother of four adopted children — took up the subject of living and dying without religion, with moral courage, with kindness, with radiant receptivity to beauty, in stunning letters to her pious physician, who had just given her a terminal diagnosis. These are more than letters — they are symphonies of thought, miniature manifestos for reason and humanism, poetic odes to the glory of living and the dignity of dying in full assent to reality.

First published anonymously by her husband in 1919 and hurled out of print by wartime want, the letters were discovered a century after their composition by the scholar Trevor Moore, who was so taken with them that he set about identifying their author. Drawing on the family dynamics unfolding in the letters and poring over the British census, he eventually uncovered Jacoby’s identity, tracked down her descendants, and teamed up with her great-granddaughter, Jocelyn Catty, to publish these forgotten treasures of thought and feeling as Words in Pain: Letters on Life and Death (public library).

In 1909, at age thirty-five, Jacoby was diagnosed with a terminal illness she never names in her letters. Perhaps she was never told — it was customary at the time, and would be for generations to come, for doctors to treat female patients as children and to withhold the reality of their own bodies from them. But she refers to it in her characteristic good-natured humor as a disease of having loved so hard as to have strained her heart.

With their extraordinary intellectual elegance and generosity of spirit, her letters constellate into a masterwork of reason argued with a literary artist’s splendor of expression. Early into the correspondence with her doctor, Jacoby lays out her existential credo:

Science is turning on the light, but at every step forward dogmatic religion attempts to turn it out, and as it cannot succeed it puts blinkers on its followers, and tries to make them believe that to remove them would be sin. This is the only way in which I can understand their continual warning against knowledge.

We always fear the unknown. I am not a coward and do not fear death, which to me means nothing more than sleep, but I cannot become resigned to leave this beautiful world with all the treasures it holds for me and for everyone who knows how to understand and appreciate them… To leave a good example to those I love [is] my only understanding of immortality.

Without the forceful self-righteousness with which fundamentalists impose their views on others, she came to see the fear of death as “only a misunderstanding of Nature.” She writes:

Not to be afraid when you are all alone is the only true way of being not afraid. Where does your courage come in, when you cannot find it in your own self but always have to grasp God morally?

Not to be afraid when you are all alone is the only true way of being not afraid. Where does your courage come in, when you cannot find it in your own self but always have to grasp God morally?

When her doctor insists that she must turn to “God” for salvation, Jacoby responds with an exquisite manifesto for what can best be described as the secular spirituality of humanism and the reverence of nature:

My Dear Doctor,
Like you I believe in a higher power, but, unlike yours, mine is not a kind fatherly one. It is Nature, who with all its forces, beauties and necessary evils, rules our destinies according to its own irrevocable laws. I can love that power for the beauty it has brought into the world, and admire it for the strength that makes us understand how futile and useless it would be to appeal to it in prayer. But towards a kind and fatherly God, who, being almighty, prefers to leave us in misery, when by his mere wish he could obtain the same end without so much suffering, I feel a great revolt and bitterness. Nature makes us know that it cannot take into individual consideration the atoms we are, and for her I have no blame; no more than I could think of blaming you for having during your walks stepped on and killed many a worm (it was a pity the worm happened to be under your foot); but if during these walks your eyes were resting on the beauties of skies and trees, or your mind was solving some difficult problem, was that not a nobler occupation than had you walked eyes downwards, intent only on not killing. I think that Nature is striving towards perfection and that each human being has the duty to help towards it by making his life a fit example for others and by awaking ideals which will be more nearly approached by coming generations. In this way life itself offers enough explanation for living; and believing our existence to finish with death, we naturally make the most of our opportunities… Unable to appeal to a God for help, we find ourselves dependent only on our own strong will — not to overcome misfortune, but to try to bear it as bravely as possible. Religion having for an end the more perfect and moral condition of humanity, I truly think that these ideas are as religious as any dogmatic ones.

In a sentiment our modern spiritual elder Parker Palmer would echo a century later in his lovely insistence that “wholeness does not mean perfection: it means embracing brokenness as an integral part of life,” she adds:

To me a good man with his failings seems a better ideal than a perfect God. We feel nearer to him and nearer to the possibility of attaining his standard. This kind of ideal actually helps people to improve, and is therefore of more value to the world.
I do believe strongly in universal good, but not in individual good. As I ask for no help from God, I ask for no explanation from him of my sufferings. I just try to suffer the least possible, and still get a fair part of my aim in life — happiness. You see, I am not ashamed to say that to be happy seems to me a reason for living — as long as you don’t make others unhappy.

When her doctor condemns and insults her credo as a weakness, she responds with a passionate defense of what the trailblazing astronomer Maria Mitchell termed our native “hunger of the mind,” which is the supreme strength of our species:

It is knowledge we want, the better and better understanding of magnificent Nature with its powerful laws that forces our soul to love, admire and submit. That is religion! My religion! How can you call it a weak and godless one?

Science is turning on the light, but at every step forward dogmatic religion attempts to turn it out, and as it cannot succeed it puts blinkers on its followers, and tries to make them believe that to remove them would be sin. This is the only way in which I can understand their continual warning against knowledge.

Four years after her terminal diagnosis, as two world wars staked on religious ideology lay in wait for her children, after four savaging surgeries and a heart attack had left her in constant acute pain, the 38-year-old Olga Jacoby died by self-induced euthanasia, intent to “go to sleep with a good conscience”, a pioneer of what we today call the right-to-die movement — another fundamental human right stymied only by the legal residue of religiosity. Inscribed into her letters is the beautiful source-code of a moral and spiritual alternative to religion — a courageous case for the right to live by truth, beauty, and altruism rather than by dogma and delusion, the heart of which beats in a passage from a letter she penned in the dead of winter two years into her diagnosis:

Charles may have to suffer from too tender a heart, but the world will be the richer for it, and because of that for his life.

Love, like strength and courage, is a strange thing; the more we give the more we find we have to give. Once given out love is set rolling for ever to amass more, resembling an avalanche by the irresistible force with which it sweeps aside all obstacles, but utterly unlike in its effect, for it brings happiness wherever it passes and lands destruction nowhere.
Complement the thoroughly inspiriting Words in Pain with Jacoby’s contemporary Alice James — William and Henry James’s brilliant younger sister — on how to live fully while dying, then revisit Tolstoy and Gandhi’s forgotten correspondence from the same era about love as humanity’s only real spiritual foundation.
Source: ‘Pocket Worthy’