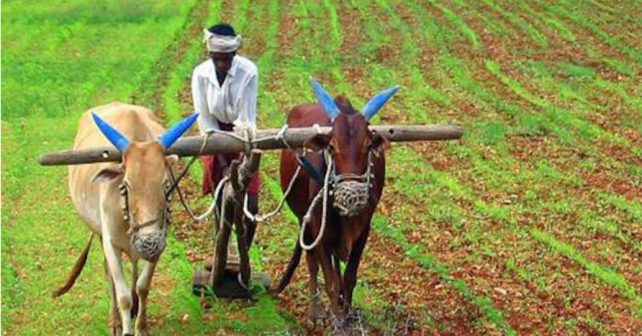 But even when subsisting by the occupation of Vaisya, the Brahmana or the Kshatriya shall carefully avoid agriculture, which involves injury to living creatures and is dependent upon others

The BJP led alliance which reposes faith and respect for Manusmriti, rules at the Centre. During the COVID-19 lockdown, where sufficient debates and discussions were not held, the Union Government promulgated THREE ordinances related to farmers, farm produces and farming activities on June 5, 2020. The ordinances were said to benefit the farmers. The practices on the effects of similar move in certain States have not brought anything as said. Only deterioration has taken place with further ditching of farmer communities.

At present, the Government has lifted the lockdown with no proof of full control effect of COVID pandemic. In order to avoid the lapse of the promulgated ordinances, the Parliament was convened. The ordinances were replaced with the introduction of three Farm Bills. The three Bills were placed in the Lok Sabha and passed. When the Bills were presented in Rajya Sabha, the opposition appealed to refer the Bills to the Standing Committee but the Bills were said to have been passed through voice vote by the Vice Chairman and 8 Members of Parliament in Rajya Sabha were dismissed for the rest of the session. The opposition has presented a memorandum to the President not to sign the Bills since the Bills were not allowed for voting and the correct procedures were not followed.

What are the features of the new farm bills and their consequential effects?

In Agriculture, marketing is the weakest link. The producer farmers do not get the remunerative price at the time of harvest. So far the Government, to the extent they harnessed the contribution of farmers to increase agricultural production for the country’s requirement, they have not been provided with suitable price. Majority of the farmers are not aware of the demand and supply theory of their produces. Only in few States, the State Governments have established Regulated Markets by legislating Agricultural Produce Marketing Committee Act (APMC Act) for their States. When the farmers sell their farm products through Regulated Markets, to some extent the due prices are facilitated. The farmers are protected from the exploitative trading of their produces by the private merchants.

By legislating the prospective Bill, the significance of Regulated Markets will be reduced. The private merchants, more than them, the Corporates would enter the open market and procure the farm produces. Such sort of liberalization has been allowed through the Bill. The farmers would have no other alternative except to accept and sell their produce for the dictated price fixed by the corporate. The Government would also be helpless to rescue the loss incurring producer farmers. No provision has been made in the Bill to protect the farmers. From the Central government side, it is stated that farmers can freely transport their produces both within the States and interstate to get remunerative prices. The argument is like pulling the wool over the eyes. Will it be practically possible for the farmers to search the different markets in the country and sell their produces? The Bill is likely to diminish the role of APMCs. The earlier experiment of closing of the APMCs in Bihar had not brought any prosperity to the farmers of the State, as argued at present by the Central government. Only suffering of farmers due to non remunerative prices have mounted up. The entire argument of the Central government is theoretical without understanding the reality both in the fields and market of the farm produce.

The Farmers (Empowerment and Protection Agreement of Price Assurance and Farm Services Bill, 2020)

The Bill is said to enable the producer farmers to enter into contract with corporates to carry on farming activities. It is said the contracting farmers would get the predetermined procurement price irrespective of prices fluctuations at the time of harvest. But how far the farmers would compete with the contracting corporates to derive more benefits. The law equipped corporates would insert the clauses which may look attractive to farmers initially, wherein the practicality of adhering clauses would be difficult for them. Despite grievance redress mechanism is said to have been provided in the Bill, how many of the deprived farmers would approach such authority. With the result, the farmers have to sell their produces as stipulated in the contract clauses, despite the pre-determined price will remain in the contract name sake. Marginal and small farmers account for 86 per cent of total farmers in the country. How can it be possible for them to carry on contract farming? The argument of the Central government is like building castle in the air. None can dwell in it. Such is the manner by which provisions detrimental to the interests of farmers are enabled in the Bill.

So far the agricultural commodities were covered in the Essential Commodities Act 1955. No one can stock the commodities without the permission of the Government; by this mechanism, the price of agricultural produces were stabilized to some extent, even though such prices are not remunerative to farmers.

By proposing the Bill, rice, wheat, other cereals, oil seeds, onion etc. along with the value added agricultural produces have been removed from the original Act. It is said that farmers would get remunerative prices by avoiding the APMCs wherein political interferences are more. This argument is like jumping into the fire itself in order to avoid the boiling pot. The Bill would liberalize the entry of private merchants and corporate to stock the produce without any limit which were not hitherto permitted. Such enormous stock holding will deprive the farmers from getting remunerative prices for their produce.

The significant reform bought by the BJP – led rule at the Centre has been the announcement of Minimum Support Price (MSP) for selected farm produces. The price has been fixed at 150 per cent of the cost production of the farm produces. Even though the price is remunerative comparatively of the earlier tenures, the coverage of it to all the farm produces and all the producer farmers are not ensured so far.

By bringing the Farm Bills, the Central government has deprived the chance of ensuring MSP for farm produces in future. There is no clause to protect the MSPs in the Bill when corporates are free enough to operate in agri-market. The little support that was available to farmers through MSPs would not sustain. Only the corporates would rule the roost in agri-market. The farmers could only spectate the happening but are not empowered in any way to ensure better price for their produces.

With the introduction of the three Farm Bills, the doubling of farmers’ income by 2022 which remains as dream, and not reality, could not remain even as dream consequent to the Bills becoming Acts. The farming communities are supposed to be the backbone of the country. Now that seems to be broken. They can hardly think of walking in future.