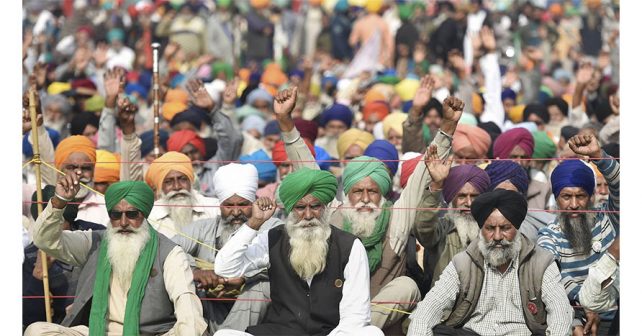 The Constitutional Conduct Group (CCG) – a group of former civil servants belonging to the all India and Central services who have worked with the Central government as well as different State governments, claiming to have “no affiliation with any political party”, of being “neutral, impartial” and “committed to the Constitution of India” – has said that the three farm laws were passed by Parliament in violation of the Constitutional provisions of federalism.

Stating that it does not wish to go into “merits and demerits” of the three laws, which have triggered a huge farmers’ uprising in North India, CCG said in an “open letter” that their passing in Parliament also suggests “breakdown of democratic processes”. In all 78 ex-officials have signed the letter.

A huge farmers’ agitation – primarily in Punjab, Haryana, UP and Rajasthan — to repeal three new laws has been under way for many months and has been supported by many other sectors like trade unions, student organizations, university teachers’ associations, a range of political parties and others.

A Bharat Bandh was called for December 8 after several rounds of talks between farmers’ unions and the Government of India failed to yield results. We do not wish to discuss here the merits and demerits of these laws but focus on the violation of Constitutional provisions and the breakdown of democratic processes in this saga.

In keeping with the federal structure of the Constitution and the range and diversity of State-specific needs, “agriculture” is at Entry 14 in List-II in the Seventh Schedule to the Constitution. The subjects in this List are within the exclusive legislative jurisdiction of the States and it has been argued convincingly that the laws passed are, therefore, unconstitutional.

Unconstitutionality apart, they represent an assault upon the federal character of the Constitution: some legal experts have argued that they violate “the basic structure of the Constitution.” The passing of these laws appears to be a case of legislative legerdemain and they have been challenged in court.

There were no consultations with farmers’ representatives before the legal process. To start with, ordinances were issued during a colossal pandemic which deserved undiluted attention. When the Bills were introduced in Parliament in September 2020, the demand to send them to Parliamentary Committees was denied.

Time was not given to debate the Bills and they were railroaded through Parliament; the demand for a division in the Rajya Sabha was not accepted and a voice vote was held amid tumult and confusion, leading to suspicions about the procedure employed. At the same time, some labour laws were passed during a walk-out by the Opposition. The question has been raised pointedly: Was this done in the belief that during a pandemic and the restrictions on public gatherings, organized protest would not be possible?

The undermining of democratic processes and the total disregard for public consultation and convenience has been evident in the ways in which Article 370 was repealed, demonetization was implemented without warning or preparation, the Citizenship Amendment Act was brought in and a lockdown ordered with hardly any notice, resulting in untold suffering for millions of migrant workers.

What is noteworthy and common to all these actions was a refusal to consult the people affected beforehand and a determination to not hold a dialogue afterwards. The facile option of labelling all those who disagree with one or other of the actions of the government as “anti-national”, “pro-Pakistani,“ “award-vapsi gang”, “urban Naxals” and “Khan Market gang” is chosen to avoid substantive discussion and debate, the very heart of the democratic process, and to vilify and criminalize dissent.

It is a measure of their discontent that farmers in lakhs are braving the winter cold as also the risks of Covid-19. The farmers’ agitation has been peaceful and in exercise of their Constitutional and democratic right to protest. Yet, they were greeted by teargas and water cannons as they tried to reach Delhi and highways in Haryana were dug up to impede their onward march.

It is difficult to label these protests as instigated by political parties or Khalistanis when the farmers explicitly keep political parties at bay and a senior Shiromani Akali Dal (SAD) leader, once a part of the ruling alliance of NDA, returns his Padma Vibhushan award.

The protests have spread across many States and are being supported by several other groups even though a largely complicit media refuses to report their true magnitude and reach.

In our capacity as former civil servants who stand up for Constitutional freedoms, we would like to emphasize our support for the democratic and Constitutional right of peaceful protest being exercised by farmers and others. It is time that the ruling dispensation listens carefully to the demands being made and demonstrates its respect for democratic traditions, procedures and practices by engaging in dialogue inside and outside Parliament.