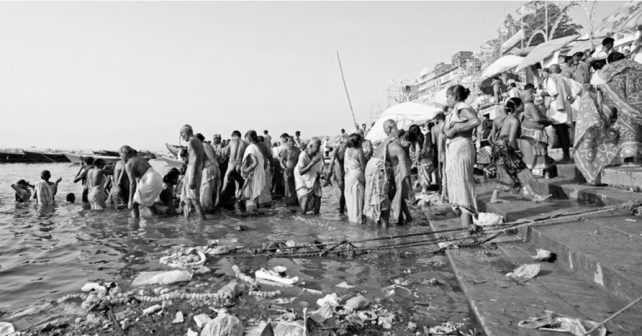 The unhygienic, polluted conditions prevailing at the bank of river Ganges

Any river by itself is benevolent and a sustaining force to keep alive all the living beings in the world.  No less is the importance of Ganga aka Ganges, a perennial river venerated by the sages and saints of ancient India.  Legend has it that it is none other than the Goddess Ganga who remains in the matted hair of God Siva himself.  No use to speak of its mythical jumble when the reality of its inglorious degradation level is kept in mind.  Holy Ganga has been made unholy and unhygiene.  Global warming and climatic changes cause a detrimental impact on the sources of water.  The resultant effect is along with undue exploitation of water for wanton irrigation, excessive industrial consumption in addition to the vagaries of monsoon that Ganges occasionally becomes a thin meander as it passes through.

True it is that river Ganga is the sixth most polluted river in the world.  Worshipping it as a Goddess is ridiculous and funny.   More so when its water is bottled as holy and sold it in post offices.  The Government meant to disseminate a scientific temper, is marketing the polluted water is a mockery of the day.  From its very origin in the glaciers of Himalayan heights of Uttarakhand until it merges with Bay of Bengal, a distance of 2500 kilometers, not less than twelve industrial cities drain their effluents into Ganges.  Raw sewage is also dumped into it even though it is on record that the polluted water is treated.  In a number of places on the way, pavement – dwellers and low-level commoners defecate in the open near the river bank of Ganges and so the faecal coliform level in the river gets increased to an unbearable proportion.

During the annual Kumbha Mela festival, a staggering crowd of 240 million devotees bathe in Ganges with a belief that they can wash off their sins and human ailments.  Whether that is true or not, they make the river water dirtier beyond redemption.  Scores of cremations take place daily on the riverside ghats in the city of Benares alone.  Here the half-burnt bodies are sometimes get pushed into the river.

Water quality of the Ganga from UP to West Bengal is not fit for drinking as per the standards set by the Central Pollution Control Board.  The situation is dystopian in Kanpur because the sewage from 300 plus tanneries is drained into Ganges.  Effluents from tanneries contain chromium, a toxic metal.  Tens of thousands poorest who live in Kanpur slums draw and make use of ground water laced with chromium which is known to cause cancer, liver failure and early dementia.  From Kanpur via Prayag to Varanasi, the river is highly polluted and proves to be unfit for bathing.

It is a tragic irony that in a water declared unfit for bathing, millions and millions relish what they call a holy dip during Kumbha Mela.  The Government is encouraging this foolhardly act by providing amenities and arranging transportation and other facilities.

Not without significance, one Victor Maller a journalist has entitled his book on Ganges as River of Life is River of Death. But still few accept that the so called holy water of Ganges are actually sullied, dirty and contain biological contaminants.  The lethal and bacterial level in the river is increasingly resistant to antibiotics.

However, alarmed at the deteriorating state of the Ganges, Ganga’s Action Plan was instituted as early as 1986 to purify the river.  But it proves to be an unending fight.  Decades back, a sum of Rs.40 crores had been alloyed towards the purification of Ganges.  But delay in executing the project not only escalated its cost but also found it impossible to either cut short or mitigate its fastly augmenting pollution of the river.  In effect, the purification efforts in Ganges are like a hide and seek game.  It continues to be so till date, not withstanding rich promises of Mr. Narendra Modi with the result of poor performance.  As on date, twenty two thousand crores of rupees are said to have been set apart for cleaning the river.  Four thousand crores of rupees have been spent so far.  Mr. Narendra Modi has assured to complete the purification work of Ganges and controlling its pollution by 2020.  Not known whether he will be in saddle until then.

As the Ganges is passing through the five states, namely Uttarakhand, Jharkand, Uttar Pradesh, Bihar and West Bengal, the state Governments and their business cronies come forward to construct sewage treatment plants.  This is to purify sewage before draining it into Ganges.  But durability of those plants is always in doubt.  Hence the half-baked cleaning efforts do not come to fruition.  Problems continue unendingly.

The role of the public is equally essential in keeping the river alive,  Apart from utilizing the water economically, the peasants, the public and the industries should not drain the effluents into the river.  Instead of merely considering the river as a Goddess and polluting it to the core, they should deem the river as a living being and treat it with respect and keep up its cleanliness.