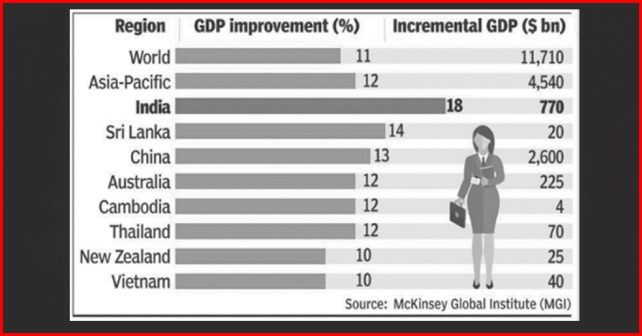 Three years back, the McKinsey Global Institute (MGI) had said in a report that advancing women’s equality can add $12 trillion to worldwide growth. It is also found that India could add $770 billion to its GDP annually in 2025, by pursuing the goal of gender parity. This is the largest relative opportunity in Asia Pacific, an economically dynamic region in the world and an engine of growth.

Anu Madgavkar, MGI partner in Mumbai, said, “India is moving in the right direction on empowering women, with the fastest progress on some dimensions of any country in Asia-Pacific over the past 10 years. Now India has an opportunity to build on this foundation by focusing not only on enabling more women to rise to leadership positions in the organised sector, but also enabling women in the informal sector — many of them in rural and urban micro-enterprises and in unpaid work — to fulfill more of their economic potential.”

According to McKinsey India, to seize the full economic opportunity available by advancing women’s equality, India would need to raise women’s labour-force participation by 10 percentage points, adding 68 million women to the workforce.