How Brahmins enslaved the south Indians? 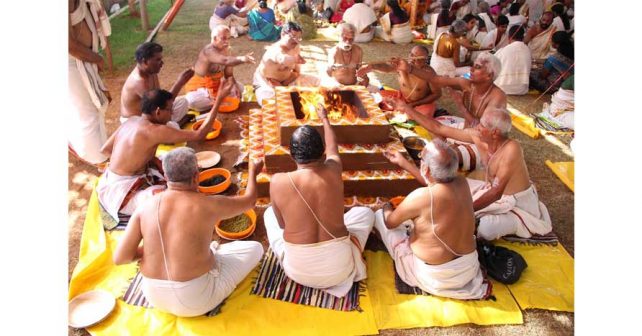 As interpreters of the Divine mysteries, and as the ministers of the ritual necessary to make sacrifice effectual, they encouraged the tendency to Polytheism and the multiplication of sacrificial rites, while for the benefit of the more intellectual they continued to expound these as symbols. The ignorant contented themselves with the material form; the initiated were taught to look beyond the form to the underlying essentials. Their position gave them also the opportunity of absorbing and shaping the more Animistic ideas of the Dravidians, and so eventually there arose the most gigantic system of idolatry, until their land was full of idols, and their shrines were to be found under every green tree and on every high hill. It is scarcely necessary to point out that all this led to the obscuring, and finally to the destruction, of all moral element in the deity, which, as we have seen, seemed to be about to be posited by the writers of the best hymns in the Vedas. Two reactions followed, each inclining to the intellectual side of religion. Scepticism put forward a material explanation of the facts of the world and of human existence, but this did not remain long unchallenged, and an idealistic conception of God and the world arose. This gave abundant room for philosophic speculation, while it professed to satisfy the craving of the human heart for union with the Divine. But the philosophic basis on which it rested was imperfect and untrue to the facts of life, and the union which it offered was no true union/ but rather the obliterating of one of the uniting factors. As far as the human spirit is concerned, the Vedantist created a vacuum and called it “ Peace.”

The Brahmans have, as a class, always shown themselves to be quick in discovering the secret of power, and as ready to make it the monopoly of their class. Their order was both sacerdotal and intellectual. When religion offered a position of supremacy they made themselves the sole authority in deciding what was the true method of ritual, and they claimed that in the offering of all sacrifice validity had been given to them. They were also the only class that gave themselves up to the acquirement of learning, and since all ceremonial directions were in Sanskrit, they became by their knowledge of that language interpreters of the sacred records as well as administrators of the sacraments.

They were both priests and professors. Later on, when Western knowledge was seen to be the key to power, their youth crowded the schools and college in which English and science were taught, and when, later still, social influence and a lucrative profession went with an official appointment under Government, the percentage of Brahmans who sought the coveted posts was far greater than that of all other castes put together.

The religious consciousness of India the most profound of its kind has for more than fifteen hundred years accepted them as the authoritative mediators between God and man. The fear of hostile deities, or the instinctive desire to be in alliance with unknown supernatural powers, brought many gifts to the temple, and they became the residuary legatees of all such bequests. With the exception of the Mahratta supremacy, in which the political power was Brahman, they have never attempted to grasp the reins of secular power. The monarchical priesthood gave them all that they desired. Most of all it gave them the final word in determining the forms which the life of the family should take, and in directing the channels in which it should flow, for the influence of the Brahman as priest is even greater in the home than in the temple. The whole life of a man in India is ordered and controlled by the family Purohita. It is the latter who directs the ceremonies to be observed before his birth, and it is he who orders the funeral rites to be performed after his death, while between these two events in the individual life every movement is governed and controlled by the priest in the household. The influence of such men established within the jealously guarded citadel of the family life is incalculable. For the securing of this position the Brahman appealed to two of the greatest powers that have worked in forming the convictions of men. They have appealed to a Divine sanction and to the sacredness of tradition. In the earlier hymns of the Rig Veda, while there is to be seen the distinction of social classes common to all nations, those distinctions had not yet hardened into the inflexible system knows as Caste/ but in the tenth book there occurs a passage which speaks of the warrior as sprung from the arms of deity, the merchant from the thighs, and the artisan from the feet, but the Brahman comes from the mouth of God. Supremacy was thus assigned to the Brahman on the ground of a Divine ordination. Centuries passed, and though that social order was challenged by the warrior class, and though the exclusive religious pre tensions of the Brahmans were denied by the Buddhist, the Brahman triumphed over both, and presently found himself entrenched in the submission of all other classes of society, until he was able to make the further appeal to tradition as vindicating his claim and guaranteeing his position.

Now all this, if it stood alone, would not wholly account for the influence of the Brahman. In isolation it would be only a very ancient illustration of the attainment of power through ecclesiasticism, and of the consolidation of that power in a priestly order. Its exclusiveness is a characteristic feature of all hierarchical orders. It reveals the selfishness which creeps in whenever vested interests begin to appear, and its lust for power, which rose at last to a spirit which claims, or at least accepts, a quasi-deification of the priest, is to be seen more or less developed in every example of a monarchical priesthood. Such positions have been challenged, and such pretensions have been resisted not once or twice in the history of religion.

The reward of good deeds was birth into a Brahman family; the penalty of evil deeds was to be born a Pariah, or the wrong-doer might even be reborn in one or other of the lowest forms of animal life.

(Caste did for many centuries in India the work which was done in Europe by the mediaeval trade-guilds. The system springs from different ideas, yet worked on much the same lines. It preserved learning by isolating the Brahman caste and throwing on them the exclusive duty and privilege of teaching. It preserved manual skill and knowledge of arts and industries by compelling boys to follow the profession of their father. A permanent division of labour was also secured. By means of caste-guilds wages and prices were maintained at a moderate standard.)

That which gives to caste its distinctive peculiarity is this that it substitutes for the law of God and its reflex in the human conscience the moral findings and edicts of a social group. It is the supreme example of communistic morality.  Vedantism teaches that all that belongs to the realm of consciousness has no real existence. The spell of Maya illusion rests not only upon the world of things perceived, but also upon that which imagines itself to perceive it. There is but one reality, and that is Brahma; all else is but the wave a passing phase of an all-pervasive element, or the spark a momentary emanation from its parent flame.

Individual obligation, of course, goes by the board where this teaching is accepted, and man is left a mere phase of passionless Being within which no distinctions of right and wrong can arise. Should he be found involved in actions reprehensible to others he is without reproach, and as he is a phase of the Eternal, the evil condemned by the unenlightened is but a manifestation of that Eternal, and lacks all moral significance.

Individual liberty is displaced by corporate determination. So long as a man observes the rules of his group, whatever form those rules may take, so long will he be assured of all that he needs for at least a tolerable existence. Let him but once set at nought the decisions of his group, or presume to act on his own initiative, and he is held to have committed the ones in which Hinduism admits, and for that sin there is no forgiveness, either in this world or in that which is to come. When this moral sanction was given to caste it transformed it from a mere system of class distinctions or trade-guilds into the most binding, the most inexorable, the most inevitable law of which human society has any knowledge.

Caste is the efflorescence of pantheistic thought, and if it be ever deprived of power this will be due to dethronement of Pantheism from its place in the Hindu mind, and the recovery of the power of self-determination, with its corollary of personal obligation, by the individual.

(published with due acknowledgement to the author)