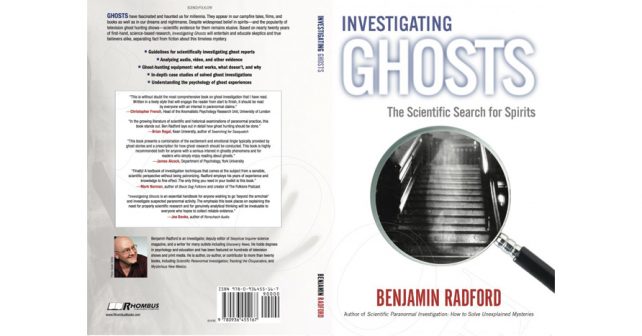 Did you feel that? A cold breeze just brushed the back of your neck, but it’s not a ghost.  That sensation is actually the cold, hard truth as presented by Benjamin Radford in his latest effort, Investigating Ghosts: The Scientific Search for Spirits. This refreshing book peels back the mystery and misperception of ghostly phenomena as they pertain to self-branded ghost hunters and investigators.

To the average skeptical mind or true believer in ghostly phenomena, this book may appear to be another work of pointing out logical fallacies that nonscientists fall for in the fad of ghost investigating and beating them over the head with how wrong they are about everything.  But the scope is far broader than that.  This book does point out the multitude of issues with ghost investigations, but it is fair, honest, and –most importantly-objective about why these are issues.  The book also offers many solutions along the way.

Radford’s focus with this book is honest and forth coming.  He’s not trying to prove ghosts do not exist; he’s pointing out to those involved in that arena that not all is what it seems, from the tools of the trade to the beliefs behind what people think ghosts are (and are purportedly capable of).  So far, yes, ghosts do not exist.  His goal is to turn on the lights of science and expose the shadows of misunderstanding, misperception, and gullibility that pilot the ghost investigation scene.  The endgame with this book truly feels like Radford is trying to help those who investigate ghosts understand what they are doing wrong and to set them up for success by explaining things simply and pulling no punches.

Investigating Ghosts leave no tombstone unturned as it covers every topic imaginable that every ghost investigator has dealt with or avid follower of ghost shows has seen on television.  The amount of content put into this book is almost overwhelming, but it is put together in three simple parts and builds upon itself within its dozen chapters.  The book flows very nicely in content, and you feel the genuine personality behind the author, which makes it an easy read. Radford’s background in psychology (and science in general) and education is felt throughout this book.  His twenty-plus years as a ghost researcher and mystery solver adds a depth to this work that I feel only he can add.  Factor in the networking with other researches and the on-point references to his observations, and this is the most solid book on “how to become a ghost hunter” that I’ve ever read especially with Radford’s objectivity.

I was a fan of Radford’s earlier book Scientific Paranormal Investigation: How to Solve Unexplained Mysteries, and while parts of that book appear in this latest work, it helps tie together this ghost-centric mystery-solving guide and does not feel like it was rehashed.  In a few places, Radford referred to his earlier works to help give the reader a lot more depth with certain topics along with a plethora of other resources to help even the most hardcore believers come to their senses.

I only wish I had a book like this when I started out researching ghosts in the mid-1990s, and one can hope that every ghost researcher out there will pick up this book.  However, the ones who really need to read this will probably sidestep it or ultimately throw it against the wall due to the multitude of truths revealed within.  Again, the one thing that I can say to any ghost researcher reluctant to read this book is that Benjamin Radford is not saying ghosts do not exist.  He’s merely explaining and demonstrating that ghost researchers have been going about things wrong for a very long time.  In this book, he provides clarity and the understanding that whatever is going on in the ghost field is not working. Investigating Ghosts will help its readers use real science.