How Not to Be Extreme 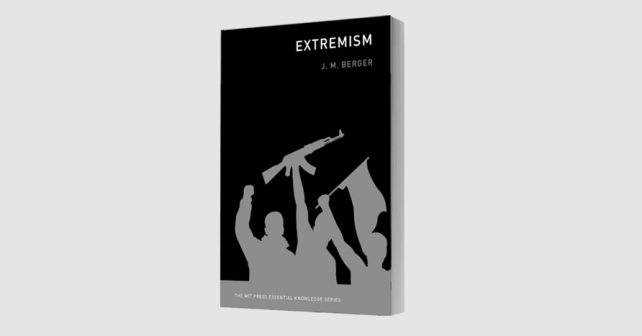 Extremism is part of the MIT Press Essential Knowledge series, consisting of short expert overviews of subjects of current interest.  The accusation of extremism appears often, and like terrorism, is too often one of those very elastic words that means little aside from an expression of disapproval.  Berger attempts to rescue the label and turn it into a reasonably precise term.  He succeeds, although the book should have been even shorter than the pocket-sized two hundred pages at which it stands.

For Berger, extremism starts with a hard distinction between an ingroup and an outgroup, with further refinements such as perceptions about who might be eligible to join the ingroup.  But going much further than the common human tendency to form tribes, “extremism refers to the belief that an in-group’s success or survival can never be separated from the need for hostile action against an out-group” (44).  Extremism, therefore, if not always explicitly violent, appears perpetually poised on the verge of violence against an outgroup identified as a threat.  Furthermore, the enemy status of the outgroup has to be conceived of as unconditional and non-negotiable.  Much of human violence, even when perpetrated in the name of tightly-knit identity groups, is not associated with extremism.

Berger’s examples of extremists make his definition clearer; they include people such as white nationalists, Christians who have demonized and persecuted heretics, anti-Semites, Jihadists, and some European nationalists caught up in anti-Muslim hysteria.  Of particular interest to secular humanists is how Berger describes extremists as being phone to cognitive errors such as conspiracy theorizing when constructing their identities and how religion is so often central to extremist groups.  Indeed, the examples of extremism Berger highlights are invariably linked to strong religious or ethnic attachments.

Since Extremism is concerned only with providing an expert definition and clarification, it restricts itself to offering generalities and broadly addressing some cases such as jihadists when making recommendations. Readers will naturally be left with many questions involving extremism, and therefore the book initiates a discussion rather than attempts to provide all the answers.  It may be interesting to raise some of the questions that may occur to secular humanists.

We may start by asking how opposition to religion can take on extremist forms. If some Christians can become obsessed with heresy-hunting and some Muslims can be tempted to jihad, then surely some dissenters from religion can also adopt an extremist style. Some nonbelievers may define their identities in opposition to a religiosity that they imagine to be irredeemably corrupt and dangerous. There are, after all, some historical examples, even though Berger has understandably omitted them from such a short book.  Critics of atheists and humanists often bring up French revolutionary anti-clerical violence and some of the Soviet attempts to crush religion as an enemy of the working class. A conviction that all religion is socially harmful can, perhaps, take on extremist forms.  Demonizing the religious to the extent of taking them as enemies to be eradicated is possible, even for those of us who think that supernatural gods and demons are fictions.

But then, we humanists are also well-practiced in deflecting such criticism.  This is humanism, dammit-we do our best to be boringly liberal and harmless. We work hard to reassure our religious neighbors that we can be as trustworthy and conventionally moral as them, maybe even more so.  One can even question why secular humanism matters if all we aspire to is middle-class respectability and an overall moral stance that hardly differs from the more liberal religious denominations.  And if we protest a big too much when trying to disassociate ourselves from extremist episodes in the history of dissent from religion, that effort itself does not inspire confidence.  After all, merely insisting that we have nothing to do with extremists is no substitute for accepting occasional bouts of extremism as part of our history and reflecting on our mistakes.

Still, even if we were to be more  reflective about how we construct our humanist ingroups and how we relate to religious outgroups, the questions would not end.  It probably is true that secular humanists are unlikely to because our social bonds are notoriously weak.  Even if we were to turn into caricatures of secularists who think that religion is demonic, it is hard to imagine us getting organized enough to do any real damage. The more telling criticism of secular humanism is our deficiency in sustaining community. Our politics tends to gravitate toward the sort of complacent liberalism that focuses on laws and institutions-less kindly, bureaucracy- that accepts massive inequalities while promoting suspicion of all human solidarity, whether religious, ethnic, or rooted in social class.  Alternatively, we may go for a right-wing libertarianism that is mercifully insane enough to be self-limiting or chase after some variety of socialist dream whose main historical accomplishment so far has been to be repeatedly crushed by the powerful.

Even Berger’s book fits comfortably into an outlook of complacent liberalism.  Concern about extremism can too easily translate into suspicion of any radial criticism of the status quo.  A definition of extremism that focuses on how ingroups can exclude and even demonize outgroups does not challenge us much; it can sit happily alongside our technocratic tendencies and desires to maintain Enlightenment myths of progress.

In a time when the United States is showing signs of social secularization while much of the technologically less advanced world is convulsed with religious revival, the sensible definition and exploration of extremism that Berger presents is valuable.  But at the same time, we secular humanists should also be aware of how the secular liberal politics of the past few decades have lost credibility around the globe for good reason.  We can worry about extremism, but we should also wonder why the secular ideals we rarely question can inspire contempt as often as positive reactions.

Ravikumar, 32 year old man got the ‘atheist’ certificate from State Government of Haryana after year long battle to renounce his caste and religion. But within a weeks’ period, the issued ‘atheist’ certificate was withdrawn by the authority.
Ravikumar, who now uses ‘Atheist’ as his surname, a resident of Tohana in Fatehabad district, Haryana was just a child when he had a moment of clarity. Some boys were beating him up one day and he prayed fervently to God to rescue him. The blows kept raining. Those were the first seeds of doubt.
Then came the tattoos on his arms that boldly spelled “atheist” and later Ravi decided to do away with all pretence and get official recognition as an atheist. In 2018, he filed a civil suit in a Fatehabad court urging it to order the Haryana education department to change his name to Ravi Kumar Atheist on his academic documents. The court ruled in his favour the same year.
Months after winning the legal battle, Ravi approached the Fatehabad district administration and finally got a “no caste, no religion, no god” certificate on April 29, 2019. But his victory was short-lived with the Fatehabad administration declaring on May 4, that it is withdrawing the certification.
A progressive move on by the State Government was withdrawn hastily!