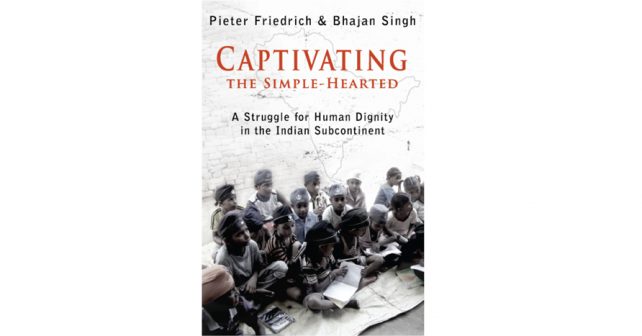 The first chapter itself such diagnosis has been carried out.

“The diverse indigenous communities ranging  from Punjab to Nagaland and Kashmir to the Tamil country, included Adivasis (tribal peoples) Shudras (the lowest of the four castes), and Adi-Shudras (outcastes), united by their exclusion from society which is dictated by the caste system, these communities represent the majority of the population.”  [page17]

The hierarchical system of repression was carried out by Brahmans (the high caste elite).  The malady of caste is well depicted through the narrative of the German Sociologist of Max Weber thus:

“Caste” is and remains effectively – social rank and the central position of the Brahmans in Hinduism rests primary upon the fact that social rank is determined with reference to Brahmans.”  [page 21]

The cause of the crux – social injustice viz Brahmanism has been well analysed and explained vividly through the writings of Swami Dharma Theertha in the book, ‘History of Hindu Imperialism’ as:

“Sofar as the Hindus are concerned, all power has remained many centuries in the hands of a small group of hereditary exploiters {Brahmans} whose life and interests are even today antagonistic to the welfare of masses of India.” [page 21]

The authors have diagnosed the social disease, detrimental to human dignity and the disease-causing germ, Brahmanism against which many reformers fought in their own ways. The war was waged many centuries back. Many battles have been lost historically of which the significant was Buddhism that was born in this land – that questioned the inhuman prescriptions in the dogmas of Hindu religion was routed out. The war is continuing till the last Shudra and Panchama are liberated from the social slavery, practised in the name of god and religion.

The book covers briefly about the social reformers both prior to Guru Nanak (1469-1539) with reference to Sikh communities who fought against the social injustice.

The prominent reformer from Uttar Pradesh, Poet Kabir (CE 1398-1448) and his contribution to the common people to liberate themselves from social suppression.  The sonnet, sung by him on the social oppressors is note worthy.

“Don’t waste your life by
continually claiming to be a Brahman.
If you are indeed a Brahman,
born of a Brahman mother,
then why didn’t you come by some other way?
How is it that you are a Brahman and I am of a low social status?
How is it that I am formed of blood, and you are made of milk?” [page 27]

The piercing poetic vigour of Kabir projected the dominating mentality of Brahmans, for whose supremacy, the entire Hindu religion has been built up.

The sikh revolution aptly reveals the role of Brahman’s who used to assume the ‘supremacy’ by associating closely and advising the ruling power, starting from the Sultane, Mughal and British empires.  Instead of becoming the kings, the Brahmans always prefer to be king makers, to sustain their social supremacy throughout the history.   Any king or kingdom cannot last longer. The comforts of continuing as kingmakers are fully understood by Brahman community. It was immaterial for them whether foreigner or indigenous people assumes the ruling power.  They are not patriotic but particular about the communally selfish tendencies to retain their dominant position in the society.

Thanthai Periyar led the Vaikom satyagraha in 1924 in Kerala, unmindful of the intervention of Mahatma Gandhi not to commence and later as well to sustain the Satyagraha.  Despite such intervention, Periyar led the agitation, that ended in success by allowing the low caste people to walk on the streets surrounding the temple without any restriction. Vaikom agitation was the first agitation for human rights in whole of the country.  The word ‘Satyagraha’ became popular from then onwards.

The book covers the historical support given by the team from Punjab which came all along to Vaikom to lend a helping hand.  The contribution  of the team was more on food arrangement for the Satyagrahis.  The mutual help from the North to the deep South of the country has got historical connections for which the contributions of Sikh communities were significant very much. The book has documented thus:

“Periyar reports, ‘the news (Vaikom agitation) reached Punjab’.  About 30 Punjabis travelled to join the agitation.  They offered Rs.2000/- as donation and consented to meet the catering expenses for the volunteers” Muslims also joined with Periyar as the head, the movement developed into one of the most unified in South Asian history.”  [page 124]

The vital role played by Periyar which still many pseudo reformers are not ready to acknowledge, has been well depicted in the book.

The book was well released on the 141st Birthday celebration of Thanthai Periyar at fremont, California, USA, organized by the Periyar International, California Chapter. The book was released by Asiriyar Dr. K. Veeramani, the ideological disciple of Periyar. One author, Bhajan Singh was present on the occasion.

The book is a good recommend to the younger generation who are interested knowing the history of social revolution in Indian sub-continent.