HUMANIST WITH THE WEALTH OF SYMPATHY 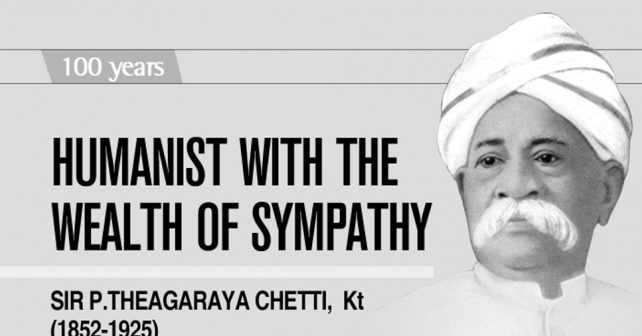 Early Life
Born on the 27th April, 1852, Sir P.Theagaraya Chetti took his B.A. degree in 1876. Fifty years ago, higher education had not made such progress as it has in recent years, and Sir Theagaraya was one of the earliest graduates of the Madras University. Yet perhaps nobody thought so little of his B.A. and no one cared less for it than Sir Theagaraya.

Indeed it might almost be said that he had an aversion to the teachers who thought too much of their bookish knowledge and who had a contempt for the proletariat. He began life as a merchant, and his family carried on extensive business in hides and skins, besides owning large tanneries in the city, the products of which were esteemed in London for their quality and finish.

In 1898 he was created a Fellow of the Madras University. He showed his keen practical interest in the promotion of education by starting a school for boys at Washermanpet, Chennai which was maintained by him at a great cost. He was one of the Trustees of the Board of Pachayappa’s Charities and evinced a keen interest in the progress of Pachayappa’s College, the first Hindu national institutions of its kind, founded long before the idea of National Education was thought of and long before the modern movement of National Education was set on foot.

As a Trustee of the Board, he rendered valuable service to the Hindu Communities. He was also for several years past, a member of the committee of management of Chengalvaraya Naicker’s Technical Institute, one of the pioneer institutions in the city of Madras of promoting technical education. He, in conjunction with his worthy colleague, Mr.V.Thirumalai Pillai, the leader of the Vaniya community, took great pains to reorganize the institute according to modern requirement.

His Works in Corporation and Legislative Council

His work in the corporation of Madras for over 40 years is too well known to need specific mention, Suffice it to say he filled the Presidential chair with grace and dignity, ration with tact and judgment. He was its first elected President under the new Municipal Act, he was elected President on four successive occassions.

His nephew, Rao Bahadur P.T.Kumaraswami Chetti, is the first President of Corportion to be elected under the communal rotation.

His Royal Highness, the Prince of Wales visited Madras in January 1921, Sir P.T.Chettiar, as the premier citizen of the Corporation, greeted the Prince and read the city’s welcome address.

Between the years 1910-12 he was an additional member of the Madras Legislative Council. Very powerful efforts were made to keep Sir Theagaraya Chettiar from the Legislative Council to represent the Madras Corporation of which he was the leader, and not a single European vote could he get.

But when he had brought into being the Non-Brahmin Movement and placed himself at its head, the Europeans in a body voted for him. They forgot the sturdy champion of Indian interests on the commercial zone in the powerful advocate of constitutional advance that he was. During the last general elections under the reformed constitution in December 1920, he was successfully returned by an overwhelming majority to the new Madras Legislative Council by the Non-Muhammadan urban constituency of the city of Madras.

When in December 1920 the first Indian Ministry was formed out of the majority, H.E.Lord Willingdon under the powers of the Government of India Act of 1919 desired to nominate Sir P.T.Chettiar as the Chief Minister. But Sir Pitti respectfully declined to accept the honour, chiefly owing to advancing age, but suggested three names from among his party for His Excellency’s consideration. All his nominees were duly appointed Ministers of the new Council by the Governor of Madras.

Any other public-spirited citizen in similar circumstances would have gladly accepted the exalted office. But Sir Pitti Chetti is made of a different stuff. Unlike ambitious congressmen of the so-called ‘Moderate’ variety, no less ubiquitous than vociferous, to whom congress fame was but a stepping stone to official preferment and high offices under Government, Sir P.T.Chetti with characteristic magananimity waived his claim as the leader of the Non-Brahmin party in the local Legislative Council in favour of younger and vigorous members of his party.

He was then President of the Corporation of Madras and preferred the honorary duties of that office to a Ministership with emolument of Rs.500 and odd a month.

His connection with the Legislative Council enabled him to bring out his small brochure entitled “The milch cow of India,” which will long be remembered as one of the most powerful indictments against the system of provincial contributions, which happily is now a thing of the past. In it he unfolded, to use his own words, the full story of the milking of Madras by the Central Government.

In 1909 the title of Rao Bahadur was conferred upon him. In January 1919, he had the title of “Diwan Bahadur”. His labours in the Corporation for over 50 years, no less than his valuable services to the public and to the State, were rewarded in 1921, when he was created a Knight.

His work as Leader of the Justice Party

In conjunction with the late Dr.T.M.Nair, the well-known Madras leader, whose incisive writings no less than his brilliant speeches ever championed vigorously the cause of the poor tax-payer in the Madras Legislative Council, Sir Pitti Theagaraya Chettiar founded in December 1919 the Non-Brahmin Movement of South India with daily newspapers in English, Tamil and Telugu as the organs of the South Indian People’s Association.

As the father of the Non-Brahmin Movement, his reputation had not only spread throughout India but also reached England. I accordance with a resolution passed at a conference held at Madras on the 20th November 1919, a joint stock company was floated for the purpose of advancing, safeguarding and protecting the interests of the Non-Brahmins communities and a political association under the title of “The South Indian Liberal Federation” was formed, besides the South Indian Peoples’ Assoication. Sir P.Theagaraya Chettiar was chosen the first secretary of the latter body.

Henceforth the life of the non-brahmin king is virtually that of the Non-Brahmin Movement. For Sir Pitti had so closely identified himself with the movement that it was really hard to separate his activities from those of this movement. In a well-thought out manifesto issued under his signature as the Secretary of the Sounth Indian Peoples’ Association, the aim of the Non-Brahmin Movemnet was clearly set forth and their attitude towards the political movements of the day lucidly explained.

Since then several non-brahmin conferences have been held at important district centres. There was hardly a session f the Confederation or of the District Conference at which Sir P.Theagaraya Chettiar, the founder of the movement and the chosen leader of the party, had not taken an active part. Age had not cooled his enthusiasm for public work, nor had opposition discouraged him from the pursuit of his aims. The older he grew the more vigorous were his activities.

Presiding over the fourth session of the Godavari District Non-Brahmin Conference, held at Rajahmundry early in January 1923, Sir Pitti said: I have no bitterness for the Brahmin, but till I see a change in the spirit of the Brahmin, till I feel that his heart has been touched by love for the great mass of the people, the toiling and moiling millions, agriculturists and the labourers, for whom he, the intellectual has now nothing else but contempt, till I find that his superior attitude had given place to a more humane one. I see no reason to change my views. And when that day comes and I trust it will come very soon the there will be no parties based on sectarian principles.

From the archive of Periyar Rationalist Library and Research Centre, Periyar Thidal, Chennai