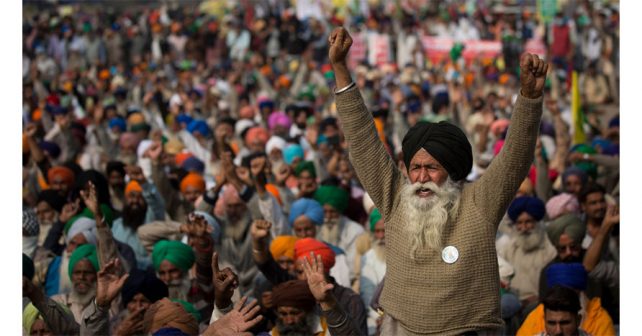 When COVID-19 pandemic needs priorities to address, the Centre is hyper-active by legislating THREE Farm Laws, the root cause for the countrywide unrest!

The farming communities of Punjab and Haryana have stared intensive agitation appealing the BJP led Central government to repeal the three farm laws that were originally promulgated as ordinances and subsequently legislated by the parliament. Many farmers both individuals and organizations have joined from the adjoining States of Rajasthan, Madhya Pradesh, Uttar Pradesh etc. with representational participation from the rest of the States in the country.

The massive agitation continues very peacefully devoid of any violence for more than a month. The entire country watches the farmers’ agitation, besides being watched by the foreign countries including the United Nations Organization (UNO).

Mismatch in Priority of Legislation

When the country has been suffering with setback on almost all development and welfare fronts due to COVID-19 pandemic since the mid of March 2020, the necessity of legislating the THREE Farm Laws in a hurried manner that were preceded by the promulgation of ordinances is not answered still by the rulers. Nothing concrete and convincing emanated on the raison de’etre for the hurried legislation except stating the laws are meant for wellbeing and prosperity of the farmers.

But it is apparent that the provisions of the enactments would lead to worsen the situation from the present condition of farmers. Things that were strictly restricted are now allowed in the name of free market operation of agricultural produce. Not only the status quo shall not be sustained, but the provisions would facilitate the hold of corporate agri-business tighter over the farming communities who have poor bargaining power to market their farm produce. With the definite weakening of the farm activities, the legislations would lead to cause indirect setback in the wage earning possibilities of landless labourers who are associated more in farming and farm related activities.

Procedural pit falls in the enactments

The THREE Farm Laws were enacted undemocratically through the legislative mode.

In Lok Sabha, when the Bills were placed it was appealed by the opposition to refer them to the standing committee for thorough scrutiny and refinement by way of deep discussion. That was denied from the treasury side. When the Bills came to Rajya Sabha, again the opposition objected to the Bill. When the turmoil was going on, the presiding person of Rajya Sabha declared that the Bill was passed through voice vote. It is against the procedure of the parliament. Prior to the ‘passed’ Bills being sent to the President for assent, the leaders of opposition  met the President and apprised the happenings in the Rajya Sabha. Despite all these unusual stages, the Bills were given assent and became Acts.

There was no formal request from any farmers’ organization for the immediate enactment of Farm Laws. The period of enactment was also very critical when the entire population of the country has been tackling the deadly COVID-19 pandemic. The prospective beneficiaries, i.e. farmers as stated by the Centre are also against the Farm Laws. To whose benefit and satisfaction, the Centre did enact these three farm laws?

Distracting the motive of the Agitation

Starting from the promulgation of the Ordinances, lot of criticism have been forthcoming. Instead of analyzing the intricacies of the criticism, the rulers at the Centre have been attempting to divert the issues bluntly and distort them stating that the Farm Laws are good to farmers in the long run. When the main provision of the Farmers’ Produce Trade and Commerce (Promotion and Facilitation) Act, 2020 legislated for the abolition of the Agricultural Produce Marketing Committees (APMCs) were effected in the State of Bihar, it has not been remunerative to the farmers of the State as expected. Weakening the APMCs without their abolition has been legislated as Central Act. There is no assured legal guarantee by the Centre to sustain the minimum support prices (MSPs) that were projected by the BJP led rule as significant achievement made available for the agricultural produce. Sticking on to the unheeding stand, the Centre has brought the farming communities to the public space and agitate.

Even after the passing of one month of agitation, the Centre is not positive to listen to the farmers’ demand and act. Any amount of amendment to the Farm Laws shall not serve the purpose except the repealing of the Acts continues to be the demand of the agitating farmers. Contrary to that, diverting and distorting the issue as–the opposition parties are instigating the agitation–foreign agencies are supporting the agitation–the agitating farmers are not farmers but commercial traders – all these statements as emanated from the ruling side will not bring any settlement despite the Centre expresses its willingness to discuss with farmers and farmers’ groups.

Interference in the governing rights of the State government

The Indian Constitution has enlisted the powers of the Union government and the State governments separately with the Concurrent List to be exercised in concurrence by them. The governing power on ‘Agriculture’ comes under the purview of the State List. But the Centre has exercised the power without even consulting the State governments. State governments are direct and nearer to the people, facing and tackling the public problem every day at the call. Farmers’ issues and problems are diversified based on the different climatic conditions and naturally differ from one State to the other. So the State governments are the proper authority to legislate the laws related to agriculture and allied activities of the respective States. Without understanding (in fact deliberately misunderstanding and deliberate negligence to understand with governing  monopoly) the issues and the nature of the governing power, the Centre has unilaterally legislated the Farm Laws. This is against the constitutional dictum and directions.

Besides, the provision of the new law has minimized and nullified the collection of fees and levy, while selling the agricultural produce through the APMCs. It deprives the revenue of the States. The BJP rule has been curtailing the revenue collection meant for the States systematically as done while introducing the Goods and Services Tax, as tax reforms. Many of the promises made by the Centre to compensate the State have not been fulfilled so far. The announcement of the Centre on the prospects of the Farm Laws shall also meet the similar ends. Besides the Farm Laws, legislated as Farm Reforms have got many pitfalls in prima facie in its provisions itself.

One of the farm laws encourages contract farming which is not practicable and feasible for India’s farm sector since 86 per cent of the cultivable landholdings are owned and cultivated by small and marginal farmers. The leverage of contracting with the scattered and unorganized farmers are let loose to big traders and corporates including the multinational companies. The poor and illiterate farmers do not have the power to dictate the terms of the contract. Practically the price for the produce would be fixed by the purchasing corporates. Even after entering into contract the corporates can dictate the farmers for the variance in the quality of the harvested produce and mode of production, thereby forcing the farmers to sell their produce at rate lower than the contracted rate. Farmers at that stage cannot go for other mode to sell the produce but to the corporates. The farmers cannot go to the civil court on the ground of violation of contractual terms by the corporates. The new law prohibits the farmers to go to the court. A dispute settlement mechanism with bureaucrats as its constituents has to deal with it. How far will the settlement favour the farmers? Time will run out!

Overall, the three Farm Laws may appear rosy on its provisions but in practice the final outcome would not be favourable to farmers but disappoint them too. The vast wide market arena created as if it is liberal will not be conducive to farmers. Anticipating all these negative outcomes owing to the implementation of the new farm laws, the agitating farmers are demanding the repeal of the Farm Laws in toto. Only meaningful legislation after holding discussion with the stakeholders must be brought by the States. The Centre could offer only the facilitative frame-work for the legislation of Farm Laws by the States. Until the underlying reality is understood by the Centre by shedding down its governing ego and act on, the lasting solution to the agitating farmers and the rest in the country would be very distant!