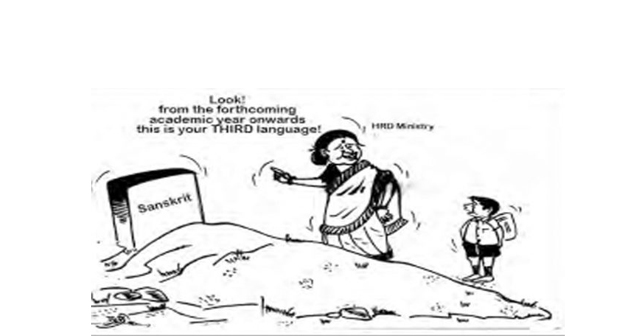 Rudely shocking  are the deep rooted conspiracy of the Human Resources Ministry and its hasty decision to compulsorily introduce Sanskrit until the 8th standard from the academic year 2016-2017 in the centrally administered CBSE, ICSE Institutions and Kendriya Vidyalayas. Plan is afoot to expand the scheme up to the 12th standard in the years to come. Reading materials will be printed soon and sent to schools. Such a decision amounts to an unwarranted   heavy load of learning three languages.

Academicians opine that learning one more language and that too a DEAD language will be of no use to the students. Learning a third language, if any must be left to the choice of the students.

Brahminical hegemony is always bent on thrusting Hindi and Sanskrit. Unless the  common masses are alert and vigilant, the hooded snake will enforce its toxic fangs on all of them. Survival of regional languages will be at stake unless they are strong enough to thwart the imposition of Sanskrit. It may be recalled that when Rajaji introduced Hindi in Madras Presidency 1938, he confessed that it was to bring in Sanskrit gradually at the next stage. This deleterious step was nipped in the bud by Periyar. He stood up valiantly, wielded his potential wooden stick and drove away not only Hindi from Tamil Nadu but also Rajaji himself from his ministerial position.

Presently Sanskrit attempts to raise its ugly head. Periyar is not with us but his powerful ideological stick is with us. Let us all unitedly face the onslaught of this extinct language. Sanskrit is not a mere language. It is  a sharp weapon of cultural invasion. If the HRD Minister Smriti Irani says that to spread the ancient Indian Culture, Sanskrit is introduced, we must remember that only after its entry and admixture, the classical Tamil broke into Telugu, Kannada, Malayalam and Tulu languages. Sanskrit culture is a synonym with irrelevant, inimical and meaningless heap of Vedas, Smritis, Epics and Puranas. Other than instituting graded inequality among all communities, and perpetually oppressing all others under its crushing heels, what else does it teach?

Excepting Brahmins, all the others are Sudras,  they say. Is it the culture and heritage to be safeguarded with public money? Should we allow this to happen? Enough damage has already been done by Sanskrit – Sanskritising the names of places, pilgrim centres, and the language of prayer, rituals and ceremonies at average home of the gullible public.

India is a country of diversified linguistic cultures. The significance of all the languages, spoken by the people of the country must be respected. The Indian Constitution includes 22 languages in its VIII Schedule and all the languages in Schedule are National languages. Sanskrit is one among the 22 languages.  All the more Sanskrit is the only non spoken language in the list. When the present status of Sanskrit is as such, what is the need for imposing Sanskrit as one among the three languages to be taught in the schools?
In respect of the cultural heritage and the literary values there are many more languages other than Sanskrit which have been recognized as classical languages like Tamil even prior to Sanskrit acquiring such status. Under such circumstances, the inner motive of the rulers imposing Sanskrit in school syllabus is nothing but an aggressive endeavor infliting Hindutva in the minds of the students. There were ancient days when the upper caste hegemony under the religious clout prohibited the learning of the religious texts in Sanskrit. Even the  hearing of Vedic mantras in Sanskrit were not allowed. In case of any violation of this divine prescription,  molten led had to be poured into the ears which listened to the mantra in Sanskrit. This practice was to uphold the supremacy of Brahminical  caste, staking claim for their divine ordain to speak Sanskrit. The Sanskrit agenda is once again introduced to uphold the supremacy but in a different mode.

The inner agenda is one and the same to sustain the caste wise hierarchy and the ultimate brahminical supremacy. The only difference is that during the ancient days the agenda was accomplished through the negation of learning Sanskrit texts; at present it is through the imposition of the Sanskrit as one among the languages to be learnt compulsorily at the level of school studies.

Irrespective of caste, creed, sex and even beyond political barriers, let all be united to oppose the entry of Sanskrit by all means. A chance to turn the pages of history and an era of heroism to establish the ancientness of Tamil and other regional languages.